In January 2014 I started working on my new book Rainbow Crochet Blankets (also called Rainbow Crocheted Afghans for the US market).
You can find the UK version HERE in my Etsy shop.

The first blanket was Crop Circles, as the book was based on the rainbow I thought I'd start with yellow, which was not a colour I use very often. I made the blanket out of NDS yarn, dyed with Fustic and Cutch which created a lovely corn field yellow.
NDS yarn is discontinued, but Drops Alpaca do an almost perfect colour match called Goldenrod.
As the yellow was corn field yellow I didn't need to search very hard for inspiration, I've always been fascinated crop circles, I love the fact that someone has created interesting and complex designs on such a large scale in the landscape, but I doubt that farmers feel the same way.

The photo's below tell the story of my Crop Circles blanket progress. 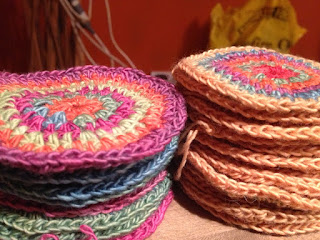 I started off trying to master making a crochet circle, you would not believe how difficult I found making a crochet circle that laid flat, I searched the internet for circle patterns and tutorials. I swatched and swatched and swatched, my circles were either curled at the edge or had corners and flat sides, eventually I tweaked the basic pattern to come up with a perfect circle.
And so my circle/square obsession began :-)

For some reason I decided to make a king sized blanket, I quickly realised that it was a stupid idea as I'd never get 10 large blankets finished within my deadline, but as I'd already started crocheting I decided to carry on and make Crop Circles to its intended size. 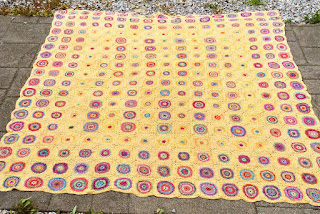 It took me 3 months, but I loved the result, so much so that I decided Crop Circles was going to be my blanket and to put it on my bed when all the photographs had been taken. 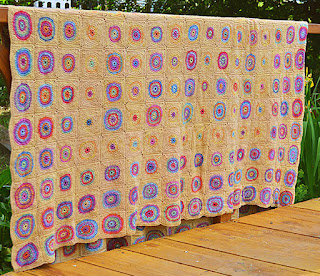 Its impossible photographing such a massive blanket, its just too big to be able to see the design. 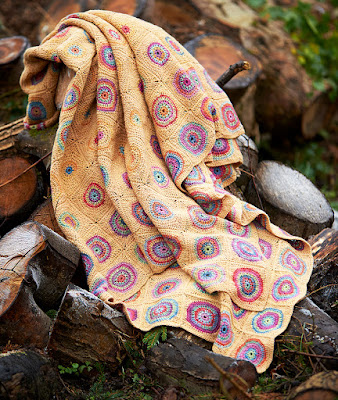 But even though my publishers Search Press focused on artistic photos rather than photo's on the entire blanket, they have done an amazing job and I think they've done it justice.