Well yesterday's "Testing" blog post seemed to work, so you can expect lots more to come :-)

Onto today's post...
Its about Icarus, one of the crochet shawls that featured in my Madder Triangles book, it originally started out as a design for a NDS crochet club I ran back in the spring of 2013.
It was inspired by the Greek myth of Icarus and his father Daedalus.
Daedalus and Icarus were exiled to Crete after they had fallen into disfavour with king Minos.
Daedalus constructed wings made of feathers and wax for them both to escape, he warned Icarus not to fly too close to the sun, but Icarus was so amazed by flying that he forgot his father’s warning, flew too close to the sun, his wings melted and he tragically fell into the sea and drowned.
It was also inspired by flying and wing's, the colours are very subtle, but if you look closely you can see darker shades which  represent a backbone, with two wing bones either side and paler shades which represent wing feathers. 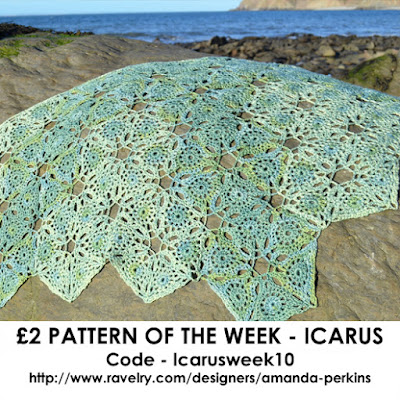 The original sample is made with NDS's Phoenix 4 ply, which was Merino/Silk 4 ply and is now discontinued.
But the shawl can be made with the following yarns, they all contain a little bit of silk which give the shawl a lovely drape.
Easyknits - Splendour, Cherish,
Skein Queen – Selkino, Lustrous, Luminosity, Oasis Grande
Cascade - Heritage Silk

You can find Icarus HERE, don't forget to use the code in the photo at checkout so you can buy Icarus for £2. 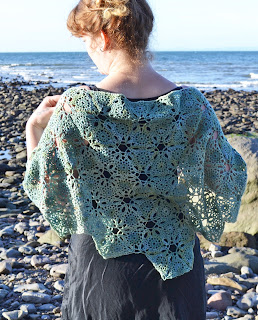 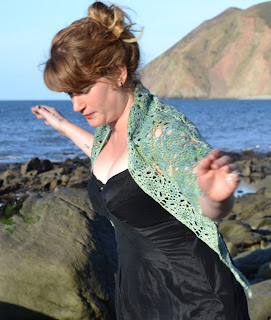 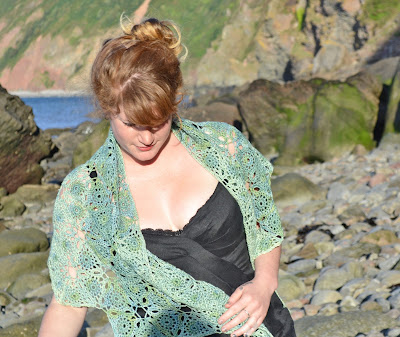