This was going to be a gigantic blog post, but after 2 day's of post show chaos, trying to tame my in-box and playing catch up I seem to have run out of steam.
So its not going to be quite as big as I originally thought.

Last weekend I exhibited my blankets at the Unravel show in Farnham Surrey, UK, the show was on for 3 days and packed with knitters and crocheters from far and wide.
I've exhibited my art work before but a long time ago and not on such a grand scale, so I wasn't really prepared for the reaction of all the lovely visitors who came to look at my blankets (I would of been happy just to hang them on the wall and just look at them myself).
My blankets were hung in the Long Kiln room, which was also being used for talks, as its name suggests it is a long room so was perfect for the blankets :-)
So without further ado here are the photo's 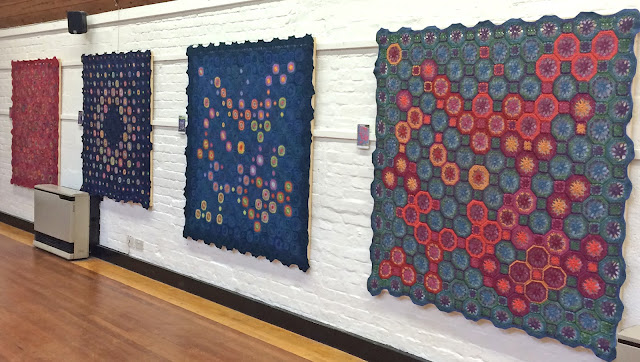 One wall had my newest blankets, the 3 star blankets and Kissing Kaffe at the far end.

These 3 blankets need to be seen together as they are an ongoing project.
From right to left and in date order they are Zodiac, which inspired Stargazer. Stargazer the first of my Exmoor Stars series & Sagitarrius A the second Exmoor Stars blanket, Sagitarrius A is so new I haven't even written the pattern yet, I finished it on Monday night and we traveled to the show on Thursday.
I'm hoping to self publish all the Exmoor Stars in a booklet late spring. 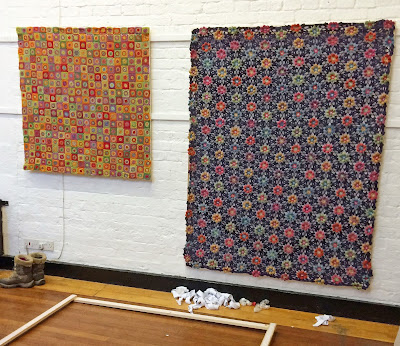 Cornucopia and Ermintrude during set up. 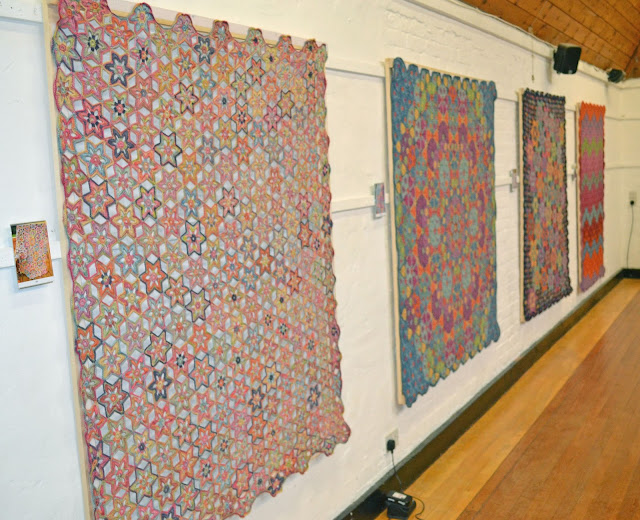 The second wall were all older blankets made during my NDS years and all made with NDS yarn.
Lily, Kaleidoscope, Twinkle Twinkle and The Rising Sun 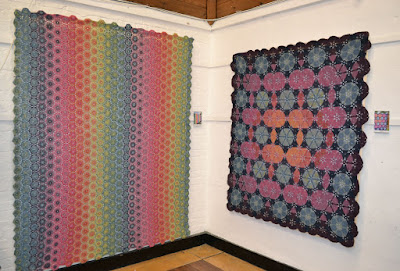 And Rita and Supernova in their own special corner.

Unravel was the first wool show that I have had the chance to be a punter, I've always been tied to the NDS stand so being able to wander around and look at wool and chat to all my woolly friends was amazing.
There are far too many freinds to name here, but I did spend a lot of time annoying Janie Crow, The Little Grey Sheep, Tall Yarns, Easyknits and of course John Arbon Textiles :-)

I finally had the chance to met Dedri Uys of the Sophies Universe fame, it was lovely to be able to chat with fellow crochet blanket designer.
I really miss being a part of the indie dyer network due to the fact I don't dye or sell yarn anymore, so my contemporary blanket designers are really special, it would of been even better if Dedri, Jane and myself had been able to sit down for a proper chat, but maybe there'll be a chance at another show at sometime in the future...

And a massive THANK YOU to Gemma and her amazing team for giving me the chance to exhibit and for putting on a fantastic show, I know it was difficult for them because it was their first Unravel, but it was a huge sucess and I'm sure next year will be just as good if not better :-)

And lastly another massive THANK YOU to everyone who came to see the blankets, for all your kind comments, enthusiasm and encouragement. It means the world to hear that you like what I do and to be able to inspire you to take up your hooks and maybe make a blanket of your own :-)