I feel really sorry for the tourists, especially the campers, but they did have sun for a few hours yesterday afternoon so its not all bad :-)

Thanks to Attic 24, (Lucy is one of the original organisers and attracts crocheters from all over the globe) Yarndale has become the only UK yarn show that focuses on crochet.
There will be all the normal suspects :-) - indie dyers, spinners, knitting designers, yarn brands, shops etc etc, but there wll also be a lot of crochet designers and crochet related stands.

It will be a momentous show for me as its going to my first show as a full time designer, not only is it my first show as a designer, but its also the first show that I will be flying solo and I'm beginning to panic.
I have no idea what to expect, what am I going to sell? is anyone going to know who I am? will anybody come and see me? will I be busy? or will I spend the whole show sitting in a corner quietly crocheting? and will the Beast behave and manage to get me to Yorkshire without any problems in the first place?
I really don't know the answer to any of these questions.

I've done yarn shows with NDS for about 10 years, but my designs have always just been pattern support for the yarn, over the years the NDS stand had developed into a very professional looking stand.
Its going to be difficult for me to produce a comparable crochet stand.
For one thing I won't be able to take all the grids as they are too long for the Beast and I don't want to hire a trailer, even though the Beast is built for towing the last 2 times I hired a trailer it had a big tantrum and broke down.
I might manage to persuade John Arbon to squeeze a couple of them into his van, but only enough to hang 2 or 3 blankets.

Secondly I don't have much of a product to sell.
So far I have a box of crochet hooks and a box of "Madder Triangles" that I discovered hidden away in the cellar, I thought the book had sold out, but it turns out that there are still a few left.
I will also have some Knit by Numbers DK, which is yarn support for Kissing Kaffe and Harlequin.
And I'm planning on raiding my stash for what's left of my NDS yarn as I can't really use it in my designs any more due to it being discontinued.

The only thing I am certain about is which blankets to take...... 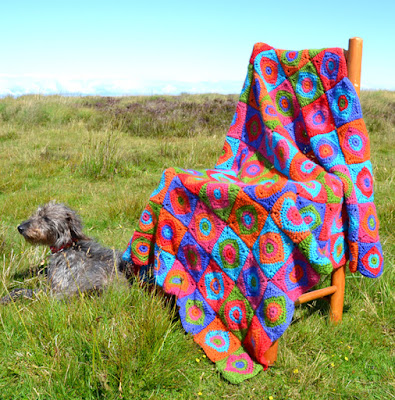 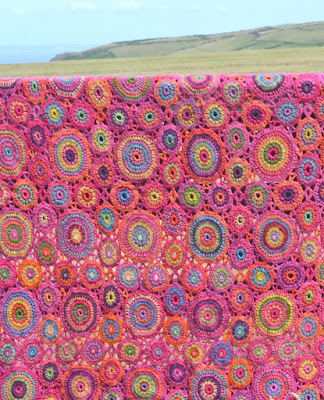 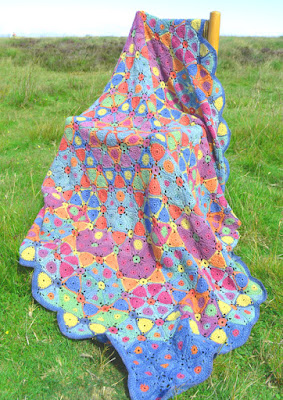 Harelquin, Kissing Kaffe and Kaleidoscope for the 3 side walls. 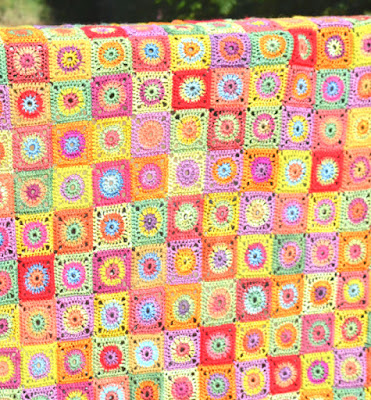 Cornucopia for the table
& maybe one or two blankets from "Madder Triangles" to cover up the rest of the table.

I need to stop dithering and panicking and just get on with it before I run out of time :-)
Wish me luck!