Good morning from a very gloomy damp Lynton.
There are 2 pigeons on the roof opposite that looks like its been through the washing machine.
They are very tiny in the photo, but it will give you an idea.

I spent a lot of last week working on the two Zodiac club blankets.
I designed the pattern over a year ago, it was incredibly complex as it contains all the Zodiac constellations laid out in roughly the right order and placements, the maths involved took weeks and weeks, luckily Valerie did an amazing job and patiently walked me through it all.
Although at one point she discovered I'd miss counted the number of motifs and all the numbers were wrong, luckily it was quite early on :-)
The blanket was designed for a NDS crochet blanket club, members who signed up for the club received all the yarn needed and 12 instalments of the pattern to run throughout the whole of 2015.
We started selling memberships this time last year, a lot of knitters wanted to join in and asked for the knitted version, so Valerie took on the job of turning my crochet motifs into knitted motif patterns.
And Phil took on the job of knitting all the motifs, but I agreed to sew in all his ends and join them together to form the blanket.

We both finished January in time to exhibit at Yarndale in September, so we could promote the club.

Phil started knitting motifs in the autumn, but I left my crochet version until the winter because I was making book blankets.
I decided to make the blankets side by side, so they were always at the same stage, this meant I could photograph them together on the same day in the same light.
Phil has always been several months ahead of me with his motifs as he just kept churning them out and didn't stop to do something else.
I had a panic in January when I realised I hadn't even started to think about February, so I finished both blankets up to April and put them aside again.

Then I had another panic in April as I hadn't started May, so again finished both blankets up to August.

(This is a photo of July, the pattern instalment hasn't been sent to the members yet, but I'm sure they will forgive me for the sneaky peak :-)

I've been half heartedly doing bits here and there. 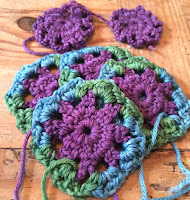 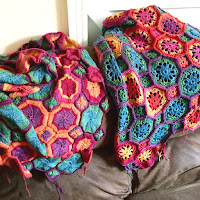 And to be honest making the Zodiac's have become a chore, I get bored working on old designs, as they are never as good as the new designs in my head and I want to move forwards rather than stagnate or go backwards.
I had begun to dread working on the Zodiac's as they were taking ages, making a single crochet blanket on its own would of been fine, I would of finished making it months ago, but having to sew in Phil's ends and construct his blanket as well made the job twice as long and far more difficult.
I'm not happy with the finish of the knitted blanket, but I'm a newbie at knitted blankets so really have to expect that it won't be as good as the crochet one.

I gave us both a deadline and decided he had to finish the knitting and I had to finish the crochet by August, he finished the knitting a couple of weeks ago, he's done so well and I'm really proud of him and his knitting achievement.
But I think he's really missing making his Zodiac as he still hasn't decided on what to knit next and keeps flicking through his pattern books looking for inspiration, maybe I ought to suggest another blanket to him.

Since he finished the knitting I have been very aware of my looming deadline, I had to force myself to finish the September installment, it seemed to take forever and I did a lot of moaning. I eventually finished September last week and only got round to photographing them yesterday.

I have had an awful lot of self doubt about the Zodiac's, the members are very quite and I'm still not sure if they like the blankets, part of me thinks that the Zodiac's have failed as a design, maybe they were too complex and the pattern is too random, its certainly not symmetrical and I like symmetrical best.
But two things have happened that have given me back my enthusiasm and the excitement I need to finally finish both blankets.

The first is the photo below that I posted on Instagram during the week, its had a massive amount of likes and lovely comments.
Its of the edge of the crochet blanket. 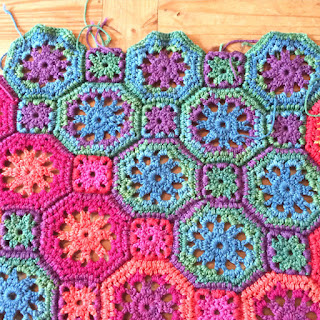 The second is the realisation that the end is very near and now I can't wait finish them both.
Last night I added the October motifs to the knitted blanket and am half way to adding the October crochet motifs, I would be working on the Zodiac's now but I have to write this blog post and do some charts for another project......