I can't puff up my designer pants

Firstly I need to explain the whole "puffing up pants" reference.

Years and years ago we were invited to a posh commune for a weekend party.
The commune had its own swimming pool, which my small children loved, especially Fred who spent quite a lot of time splashing around.
I think he must of splashed another small boy too much, who made some kind of cutting comment about Fred being a idiot.
Fred's answer involved accusing the other boy of having puffed up pants, all because the other boy had swimming trunks on that were inflated by being in the water.
Ever since then "puffed up pants" has been a family saying that refers to people who are self important and boastful.

The internet, especially social networking sites are full of people with puffed up pants, including me.
"Puffing up your pants" is essential to running an internet business, its almost a full time job on its own and exhausting, to be honest I'd much rather be dyeing yarn or crocheting than shouting "look at me, look at me" the whole time.
For example I've been at work for 3 hours today and the only thing I have been doing is puffing my pants, on Ravelry, Instagram, Facebook, Twitter, Flickr and now writing this blog post.
I should be dyeing wool for Wonderwool or designing or working on the site, but because I have been silent all weekend I need to do some catch up.
The main problem is that there are so many people puffing that it is easy for our customer's to get side tracked somewhere else and forget we exist.
This might seem like a bit of a negative statement, but it happens and it did happen to us several years ago.
We stupidly went on holiday and I allowed myself 10 day's off pant puffing, sales dropped while we were away and I had to do lots and lots of puffing to regain ground.
Ever since then I have been really diligent about keeping up with my puffing.
I've just discovered Instagram which is a huge help as if I post a photo on Instagram I can share it with Twitter, Facebook and today I discovered I can also share it with Flickr, its saves a huge amount of time.

And now I get around to the reason I can't puff up my designer pants.
As you know I am working on a crochet blanket book, the deadline is December 2015.
So I will have 2 years worth of crochet that I can't share or puff.
I need to keep puffing or you will forget I exist and the book won't sell, so its a bit of a dilemma.
The other thing I have been working on is my NDS crochet Kaleidoscope club blanket and I can't puff my designer pants about this either.
It has to be kept a secret as member's get a bit more of the pattern each month and if I puffed the finished blanket it would spoil their surprise and the whole club would be slightly pointless.
The reason I am writing this blog post today is that I finished the 2014 Kaleidoscope blanket on Saturday, and I'm so pleased with it, and I desperately want to share my excitement.

The only thing I can do is share cryptic photo's that don't give the game away, so here is the latest photo of the finished Kaleidoscope and a sneaky peak of this week's NDS update yarn.
And hopefully I will be able to find enough things to puff in the next couple of years to keep you reading. 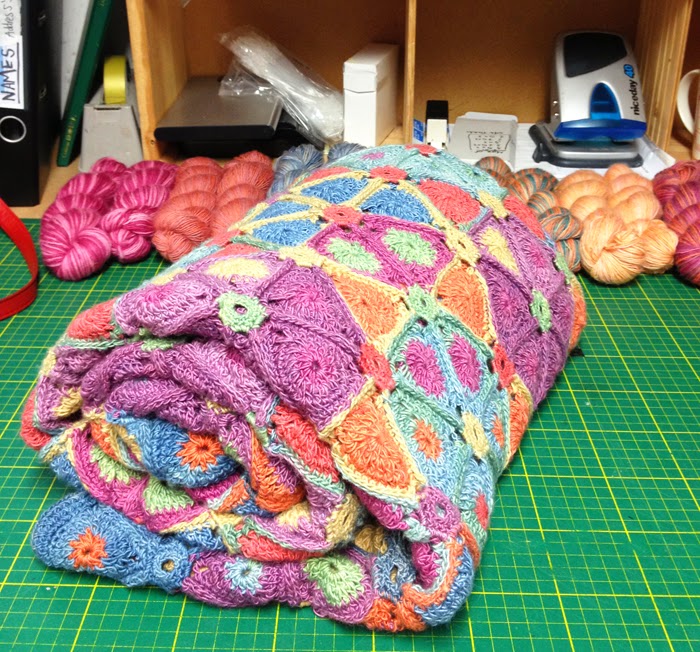 P.S And in case you didn't know already here is a list of places you can find me puffing up my pants :-)