I have just finished making Ermintrude.
At the moment she is sitting on the packing table waiting patiently to be photographed.
But I do have lots of "in progress" photo's to show you.
I'll start at the beginning.

I started Ermintrude in August.
She was going to be called Isabella, but Phil said the flowers looked like the flower Ermintrude the cow had in the corner of her mouth.
Ermintrude was a character from The Magic Roundabout, which was a tv programme we both watched as children in the 1970's.
If you haven't seen it and have no idea what I'm talking about, here is an episode - http://www.youtube.com/watch?v=PMpu8jH1LE8

I decided to use Godiva - Merino Singles DK as its soft and cuddly and I hadn't made a DK blanket for several years.
I used a smaller hook than I normally would, which made the flowers stand up from the blanket, I also made a swatch in 4 ply which didn't work as well. 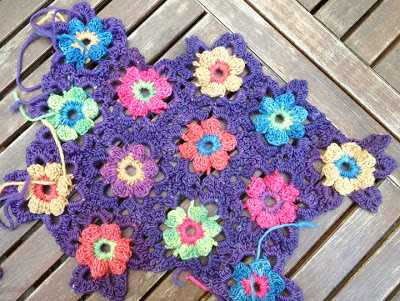 I made 28 motifs and blocked them to see what it would look like. 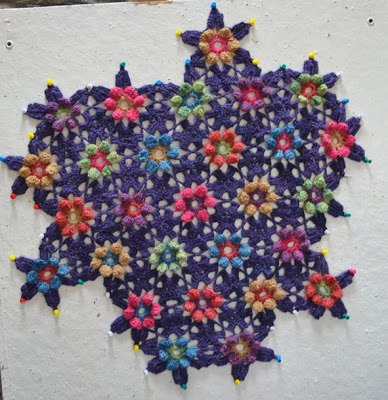 I decided round 3 needed some extra stitches and I ran out of the background colour (Paracombe), so I frogged it and dyed a kg of background colour.
But we had a wholesale order for the same colour at the same time, so in actual fact we dyed 3 kg's in 2 different dye baths, the colours were slightly different.
I don't mind colour differences, but our wholesale customer wouldn't of been happy.
We couldn't tell the difference between the dye lots, but I knew there was one, so Daisy had to re-wind the whole lot just so we could compare skeins.
We went on holiday mid September, and left Dais in charge of NDS, she had a ton of winding to do including the 3 kgs of Paracombe Godiva.

When we came home from holiday I had 28 flower's and 10 skeins of background colour.
I had designed and started a new blanket while we were away, but when we came back I wanted to work on Ermintrude. 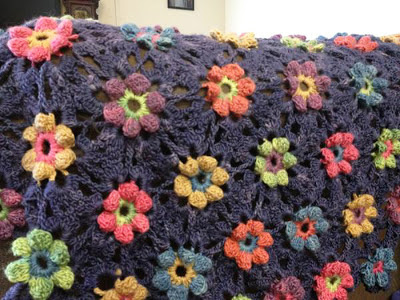 Even though she has 188 motifs she worked up really quickly, or maybe its just I'm obsessive, I crochet every spare minute I can.
Then last week Phil gave me his man flu, so I sat crocheting on the sofa for 4 whole day's, until Ermintrude was finished.

Then I had a blocking problem, back in Suffolk I used to block big blankets on garden tables, but it rains a lot in Devon and I only have 1 garden table.
So I came up with an ingenious solution.
I stretched Ermintrude over the yarn drying rack frame, which is under the perspex roof. 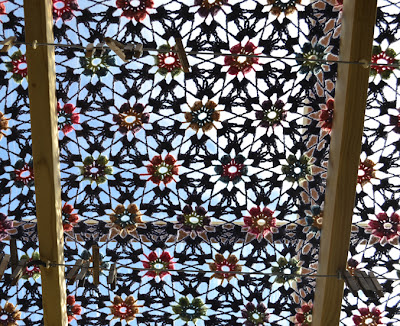 Ermintrude dried really quickly, but as it was impossible to see if she was straight when I pinned her out she is a bit wonky and not blocked as well as she should be.
She looks really lacy in the photo, but she's not as lacy as she looks. 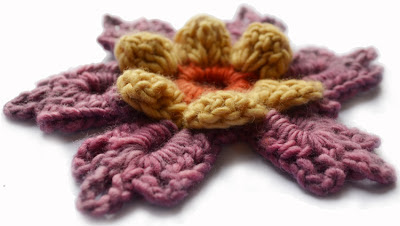