I've never really understood the point of crochet mandala's or even mandala's in general. The cynical part of me thought it was just a trendy word for swatches & motifs and that mandala's were just interesting patterns.
So when I started crocheting circles mandala's I felt a bit of a fraud, so I did lots of research and discovered I was wrong.
The following quote is from Wikipedia

The mandala is "a support for the meditating person", something to be repeatedly contemplated to the point of saturation, such that the image of the mandala becomes fully internalized in even the minutest detail and can then be summoned and contemplated at will as a clear and vivid visualized image.

I've never been a spiritual person, but realised that sewing in ends is my version of meditating. I use a lot of scraps in my blankets's and love remembering the feel of the different yarn types, the sound of the scissors as I snip the ends (rustic wool is especially satisfying as it crunches) and the colours, always the colours..
Looking at the finished mandala gives me the same enjoyment, the way the colours work together, the stitches and different yarn types, I hope others feel the same way.
I'm getting immense pleasure making them, I'm using my colour and design sense's, hoping that it will help lift my block.
Having something to sell that people want to buy has bolstered my confidence, I didn't even realise it was something I missed until I started posting packages.

So I have a mandala plan...........
For the whole of January I'm going to make 2 round mandala's like the ones at the top of this post.
On Tuesday 28th of January I will post them all for sale on Instagram and Facebook, the following week I will add the unsold ones to Etsy.

For the whole of February I'm going to make 3 round mandala's, like the one below. 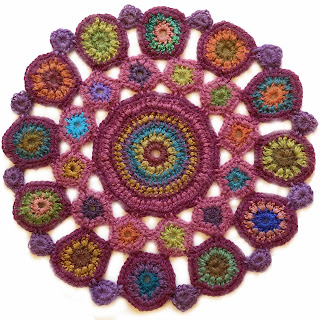 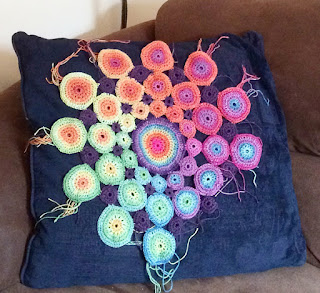 In April I will work out what to do next, maybe more mandala's, maybe my block will have lifted and I will start making more blankets or maybe I'll do both.
Watch my Instagram account and Facebook page for more updates and information.