I self published my first book in 2012, it was called Desirable Crochet Motifs, volume 1, a year later I published volume 2.
The books each contained 20 motif patterns, most of them already published for a motif club that I ran from 2008 to 2012. 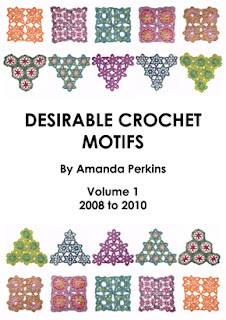 My pattern writing and design skills have come along way in the last 7 years, so I have decided to write a new book called Desirable Crochet Motifs, the complete collection. It will contain all of the 40 original patterns, redrawn, rewritten and revamped, plus 20 new ones.
There are a lot of crochet motif books on the market, I need to do something different to make it stand out, so the book will contain blanket patterns, I'm not sure how many yet, but hopefully there will be at least 3.
The new Desirable Crochet Motifs book is going to take me a least a couple of years to finish.
Each motif pattern will take about a week to write, I need to re-work the design, crochet several swatches, take photo's and draw charts. 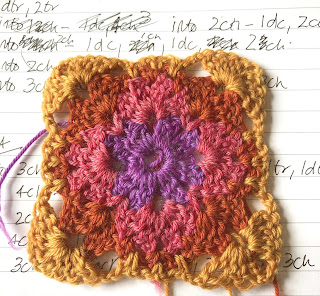 I thought as the book is going to take so long you might get bored waiting, so I have decided to run a CAL/Club type thing, it will feature some the motif patterns. I'm planning to run it on Patreon, so you can decide how long you want to be in the club. There will be different tiers of membership, all including a monthly motif pattern, some include the blanket CAL instructions and the yarn and the book when its finished.
I'm still working on the details, but will let you know as soon as the club subscriptions are open.
However first I need to do a lot of work on the motif and blanket patterns.
The first blanket will be a kaleidoscope blanket design, similar to the kaleidoscope blanket club I ran in 2014 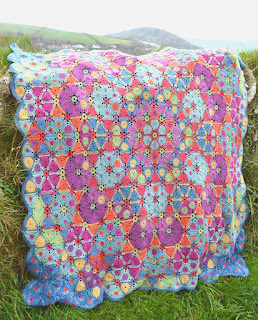 The new blanket design has a different layout and rather than solid triangles motifs it will be made with 10 different motif designs. I'm not sure how its going to work yet, but the blanket design I have in my head is going to be amazing, fingers crossed I can make it work.

The CAL won't start until I have finished all 10 motif designs and written the blanket pattern. When I ran the Kaleidoscope club I was working on the blanket a month ahead of the club members, I did a lot of panicking and kept my fingers crossed that it was going to work and the members wouldn't run out of yarn. I want to be a lot more prepared this time, so far I've made and written 2 motif patterns, but they're not finished as I still need to crochet more stitches and draw charts. 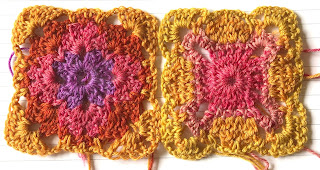 P.S
If you want to stock up on some yarn before the CAL/Club starts I am using Coop Knits Socks Yeah 4 ply, its slightly thinner than the normal 4 ply that I use, but its beautifully soft and has an amazing stitch definition, plus comes in a beautiful range of colours, plus it comes in 50 gm skeins, which makes it easier to buy if you are on a budget.