I have decided to start writing this blog again and turn my website blog into a news blog for grown up business posts. But don't worry there will still be a lot of crochet here :-)

So much has happened since my last blog post back in November 2017, this is a long recap post, I was going to add my crochet updates at the bottom, but have decided to do a second blog post.

When I last wrote I had a 2 month old baby grandson, now I have a 17 month old toddler grandson and am expecting a new grandbaby in the next few weeks, I can't wait to meet Bert's baby brother or sister, the arrival of new life is so exciting especially when its your own flesh and blood.
This is Bert, his mummy & baby sibling bump on our visit to the tallest tree in England yesterday 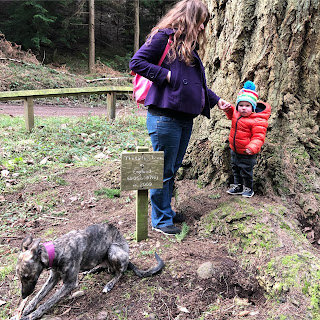 In the foreground there is a strange looking dog, who is our new puppy Ron.

We lost 2 of our beloved pets within 6 months of each other, firstly Billy the Maine Coon cat died just before Christmas 2017 and then Loki our beautiful GSD died in May last year, I still can't think about them without tears welling up in my eyes.
So at the end of August last year we brought home a tiny 8 week old lurcher puppy, he has the same Dad as Tinkerbell our existing lurcher, but his mum was a greyhound x. We were expecting him to end up as a bigger version of Tinks, instead of which it looks like he is going to grow up to be pseudo greyhound, he's a lot bigger than he should be and has a smooth coat rather than the rough coat we expected, plus he moults!! But we love him regardless.
Bert really loves Ron, Ron really loves Bert, together they are a nightmare bundle of chaos with 6 legs, 2 hands and a mouth full of razor sharp teeth.
Ron has grown so much in 5 months, he's still got a lot of growing to do, hes going to be massive, he's also impossible to photograph as he's a camouflage sort of brindle colour 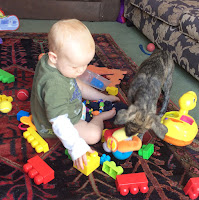 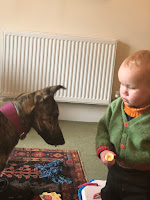 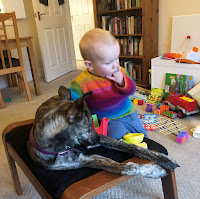 In June last year we moved house again!
I was heartbroken to leave our big roomy house and large garden, but didn't take long to fall in love our new small ground floor flat and south facing courtyard.
The courtyard is long and thin, I decided I wanted to turn it into a Mediterranean courtyard, so as it was my birthday soon after we moved and I was given a olive tree, a grape vine and fig tree, they were so beautiful......
But Ron has since eaten the grape vine and fig, they are both stumps I have my fingers crossed they will both grow back in the spring and Ron will have outgrown his destructive phase. 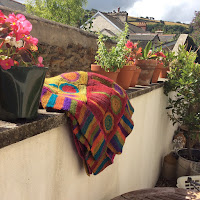 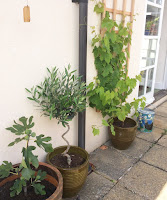 In October my beloved Beast died, I know most of you will read this and think why the fuss, its only car, but to me a car is so much more than a big metal box. I genuinely love my cars, they are kind of big metal pets. 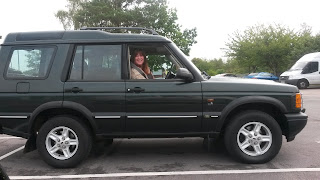 I love driving and the sense of adventure when I get behind the wheel, we could go anywhere and do anything, the Beast was an extension of me, big, lumbering, middle aged and slightly broken.
So we had a new (old) car, which was a slinky and speedy BMW, but it didn't feel like our car and as it drank petrol every time you accelerated we couldn't afford to keep it. So last week we traded it in for a Mercedes, which is the poshest car we've ever owned, but quite old so not as expensive as it sounds. We took it on a road trip to Cornwall at the weekend and fell in love, its big, middle aged, not lumbering, only very slightly broken, with surprisingly good fuel economy and very very posh, so we've named it the Posh Beast. 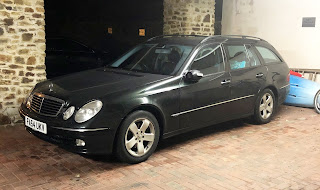 Emotionally I have been up and down like a yo yo, so much grieving and sadness, but so much new joy, I'd really like 2019 to be calm and stable.
I had written a cathartic post about being my traumas and being depressed on my website blog, but I've deleted it and re-posted it HERE