Last week was all about end of the NDS dye room.
We started off the last weekend with a mega packing session, well over 100 parcels of the last NDS update wool to pack and send all over the world.
As expected the stupid website sold the same skeins twice and even sold yarn that I had deleted off the website, several hours after I had deleted it - Grrrrrr
So sadly there were a lot more refunds than we had expected.
Thank goodness Etsy doesn't behave in the same way!
I am planning to thin my stash in the next few weeks and add the extras to my Etsy shop so our disappointed customers get a chance to buy some. 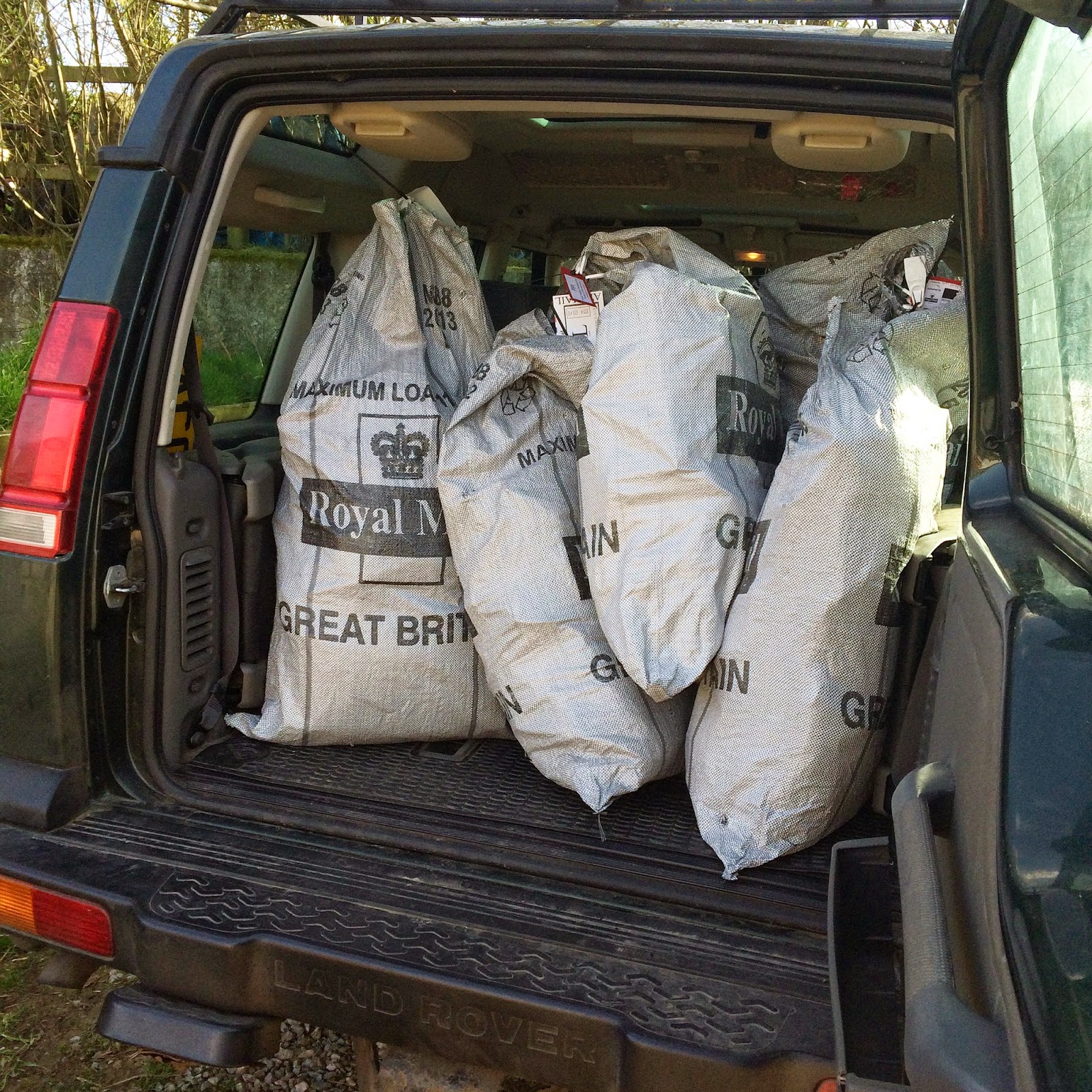 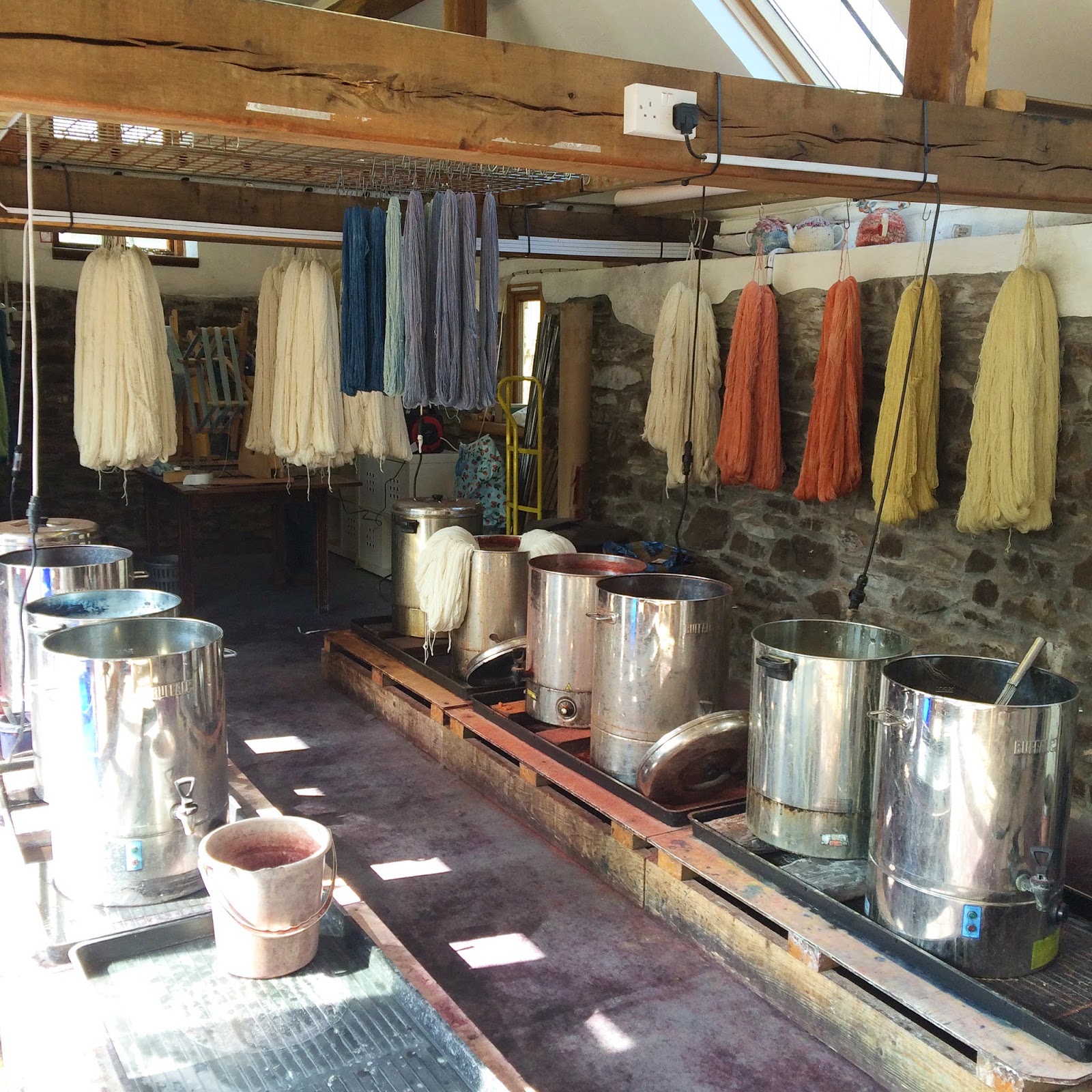 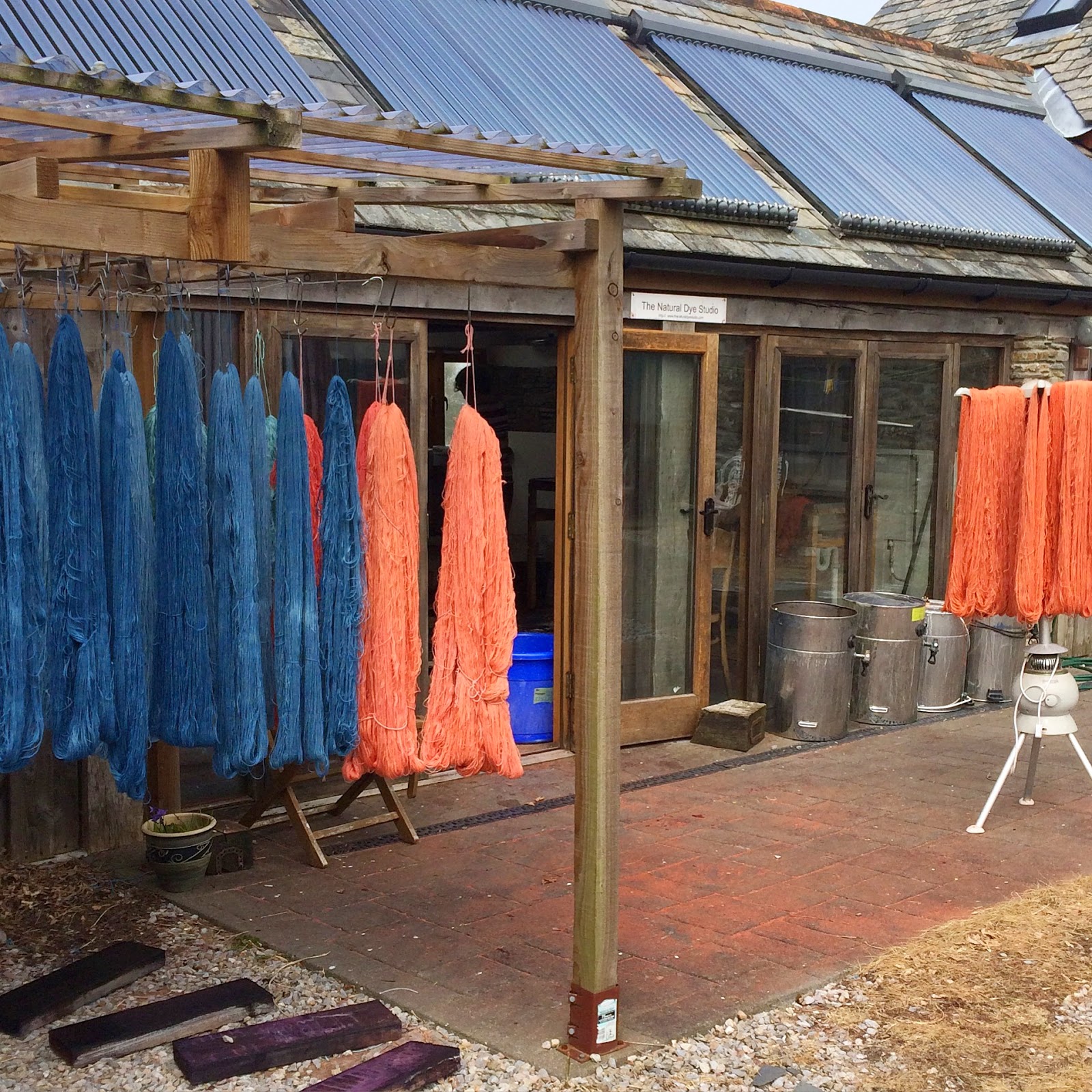 We had 40 kgs left to dye for our friend Linda of TALL YARNS
We're working overtime this weekend to get it to her and really hoping it will arrive with her in time to be at Wonderwool next week.
If you are going to Wonderwool, go and see Linda as she will be selling the last skeins dyed at NDS.
Anyway on Monday the dye room looked like the above photo's.
And by Wednesday morning it looked like this, 3 dye baths down, 3 to go. 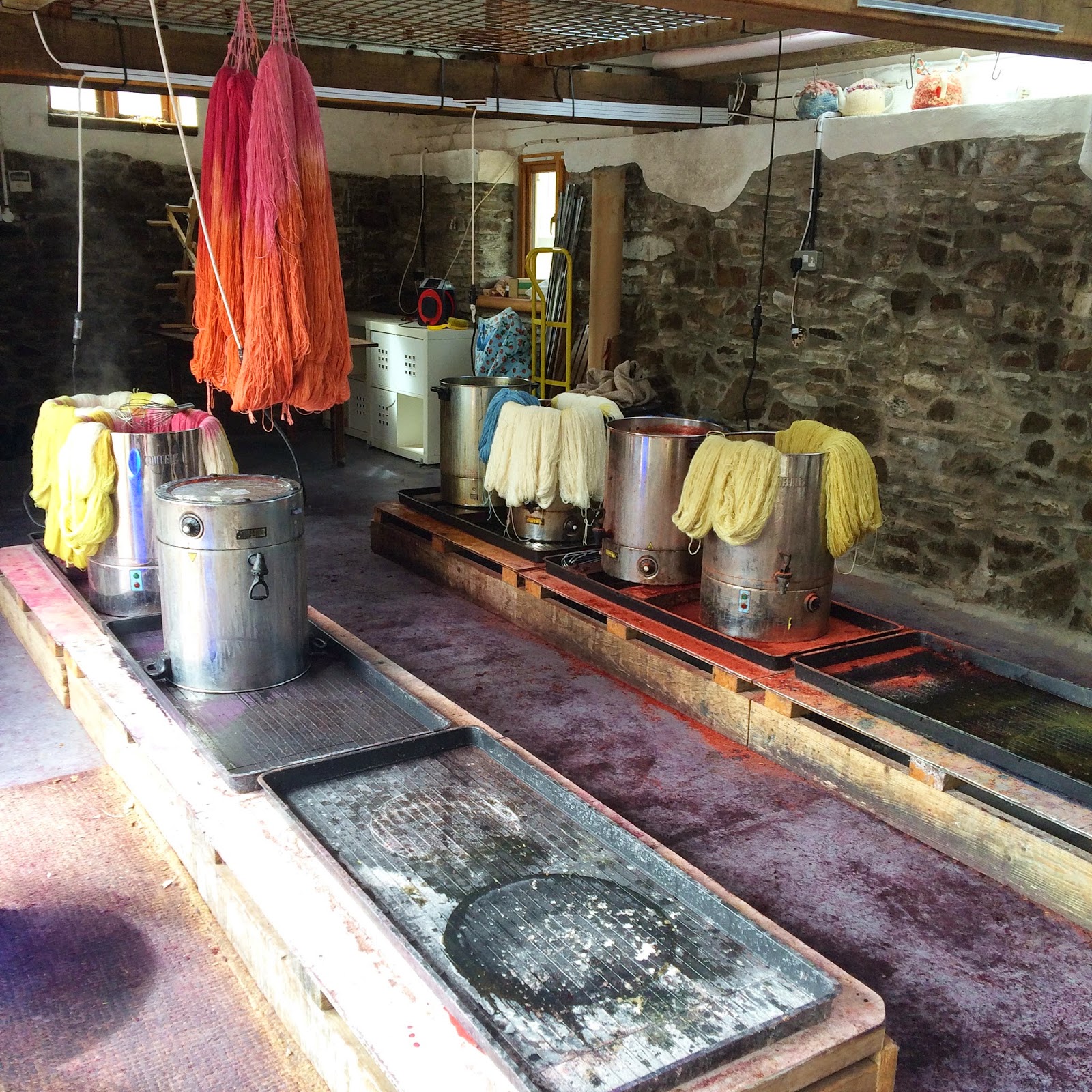 Our last dye bath was indigo.
This is Dais dyeing her last skein 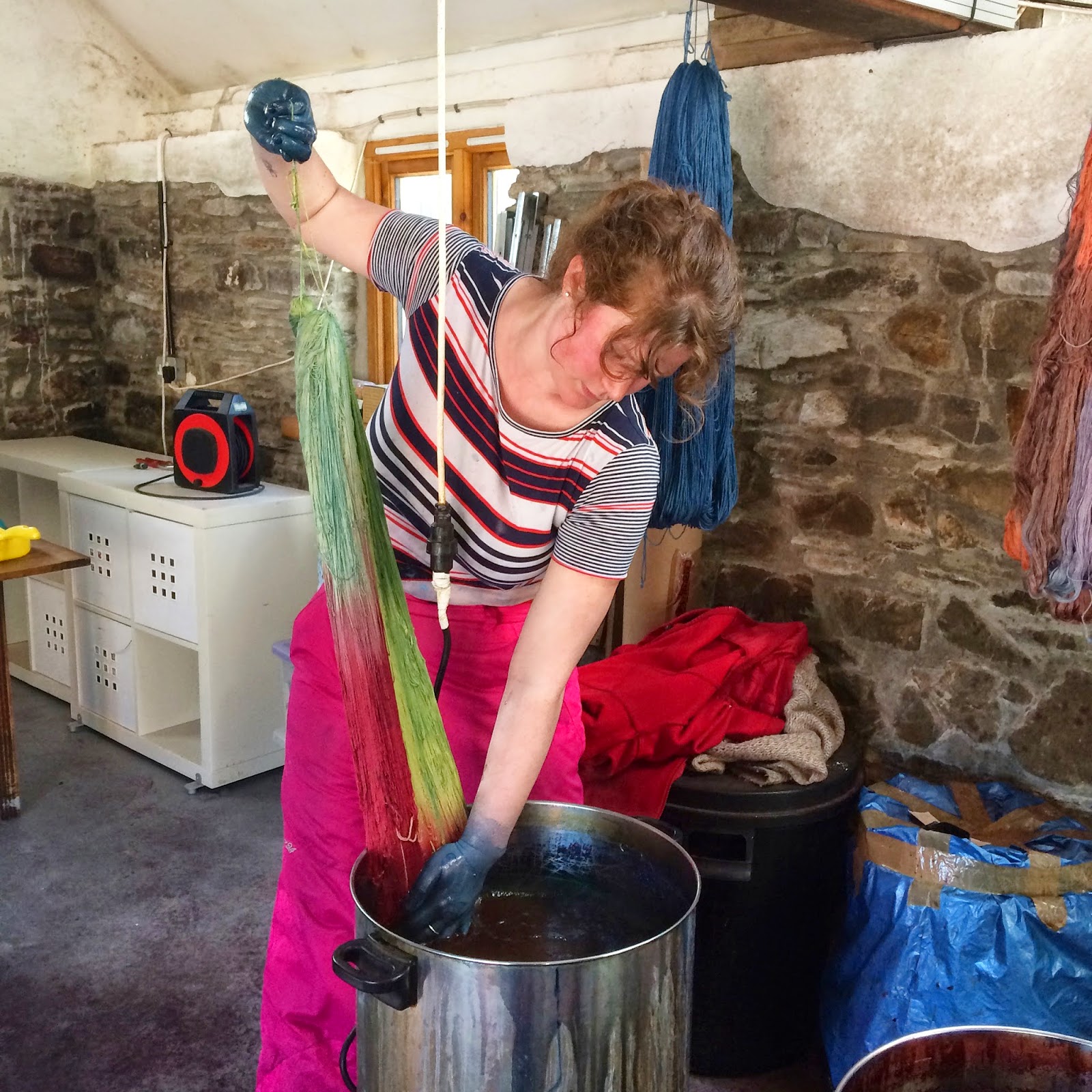 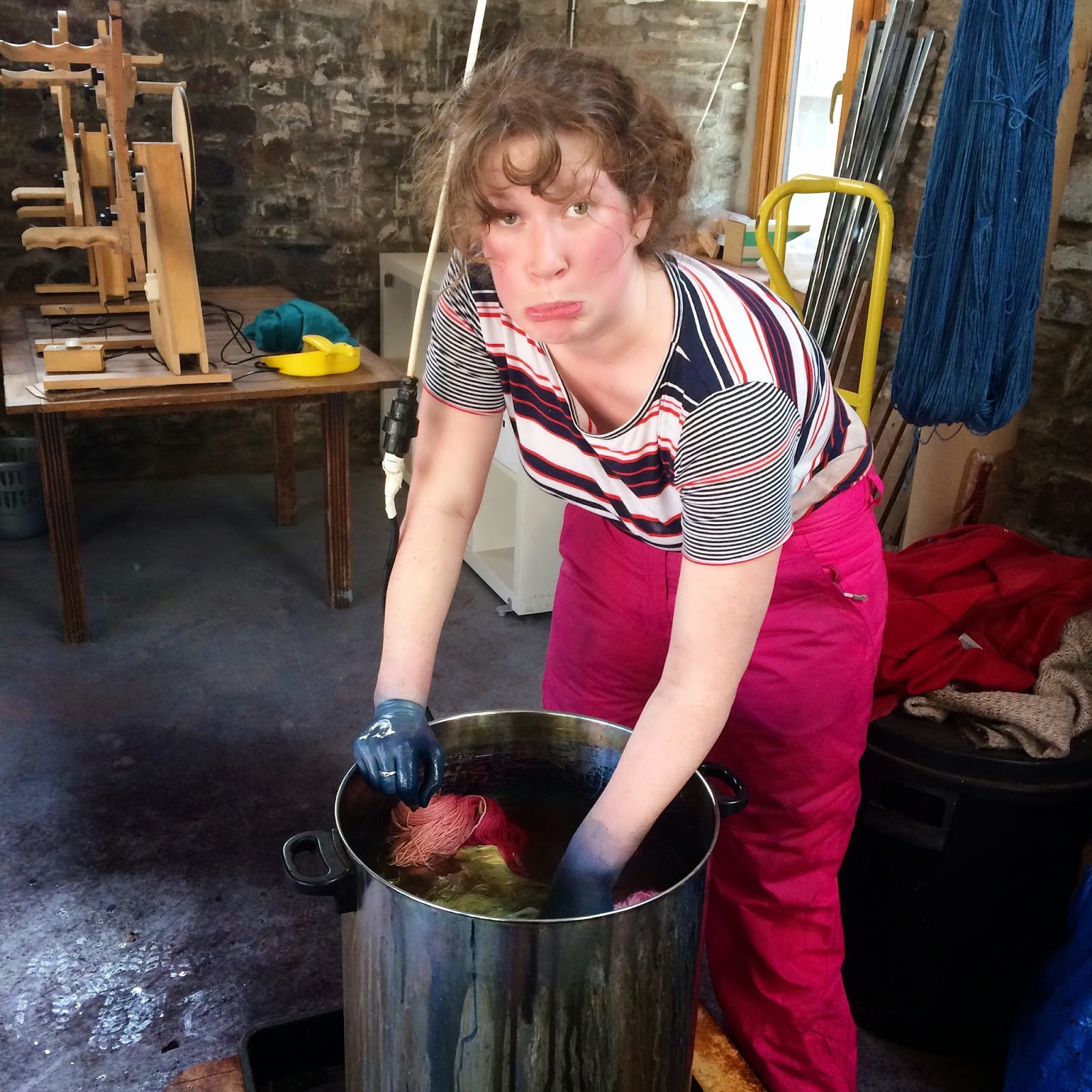 And me dyeing my last skein, in the first photo I was crying so much I couldn't look at the camera and in the second frustration had set in, the tears had stopped as I was grring so much.
The indigo came out blotchy and so I had to re-dye the skein meaning it ended up a lot darker than I intended. 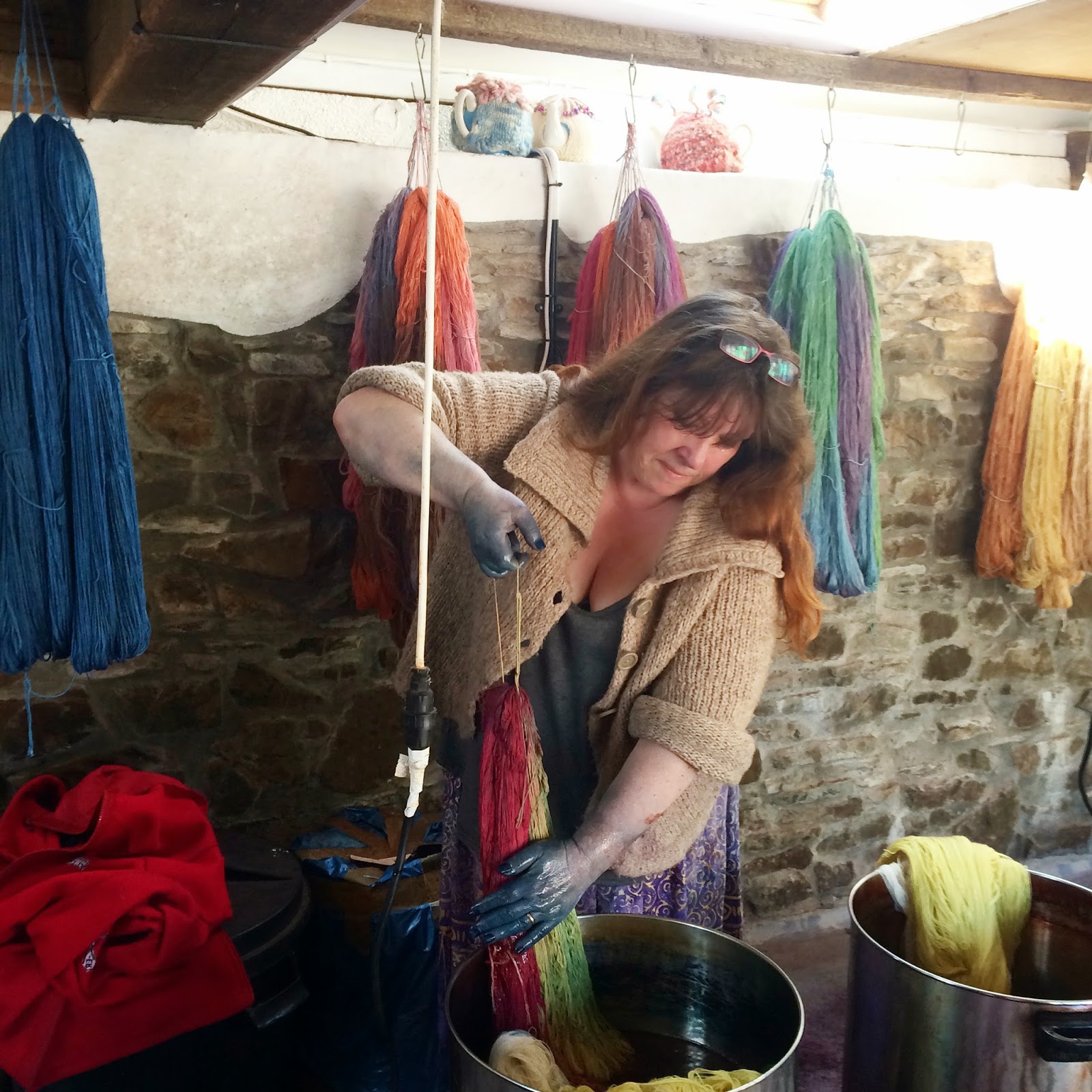 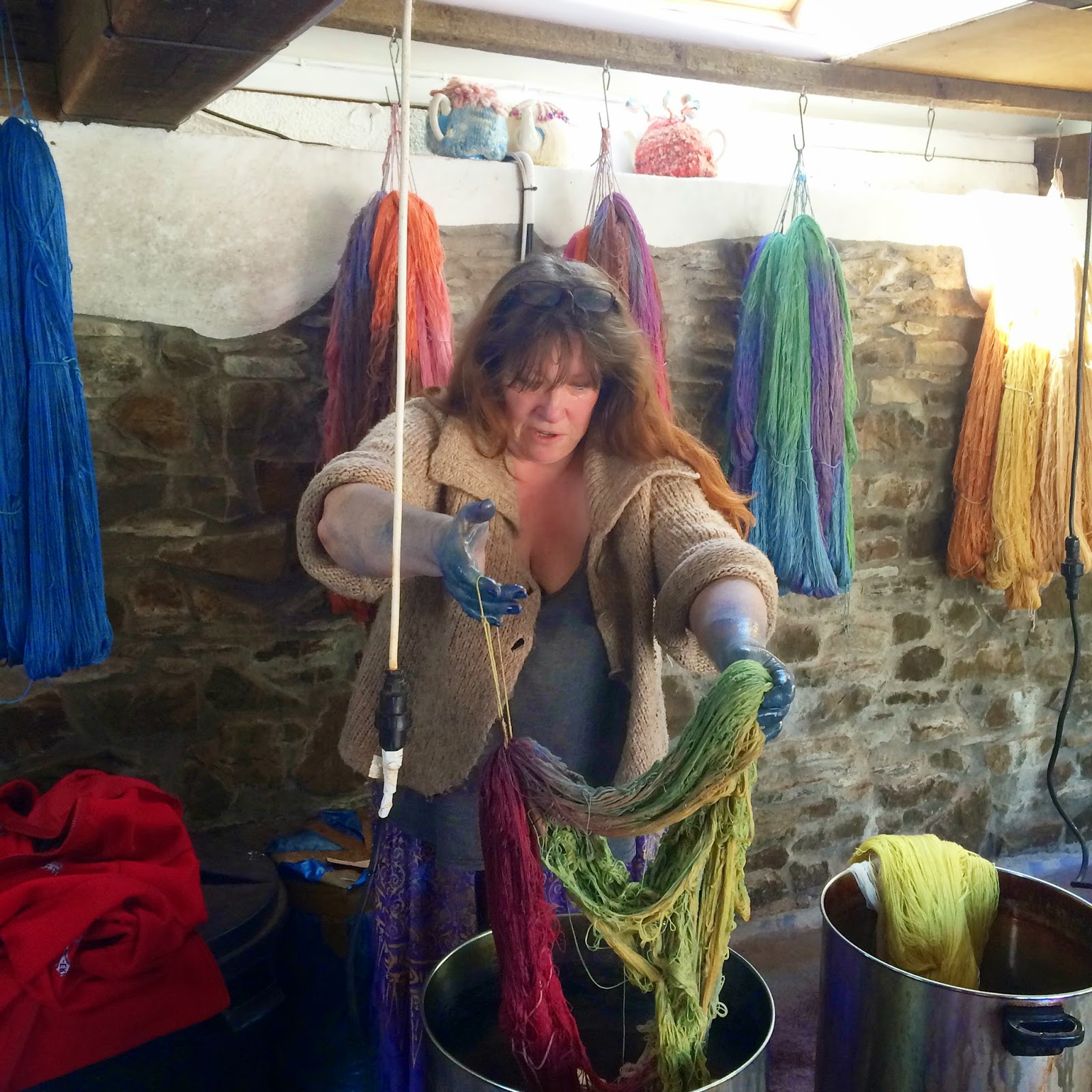 By the end of the day, we had emptied the last of the dye baths, We'd dyed 40 kgs in 3 days and so were both physically and mentally broken.
So we went to the pub and cried into our beer.
And then I took my dogs for a walk on the top of Countisbury Hill, it was peaceful, serene and beautiful, Lynton and my home is in the dip between the hills, which you can't see it because of the haze.
It was a perfect ending to a heartbreaking day. 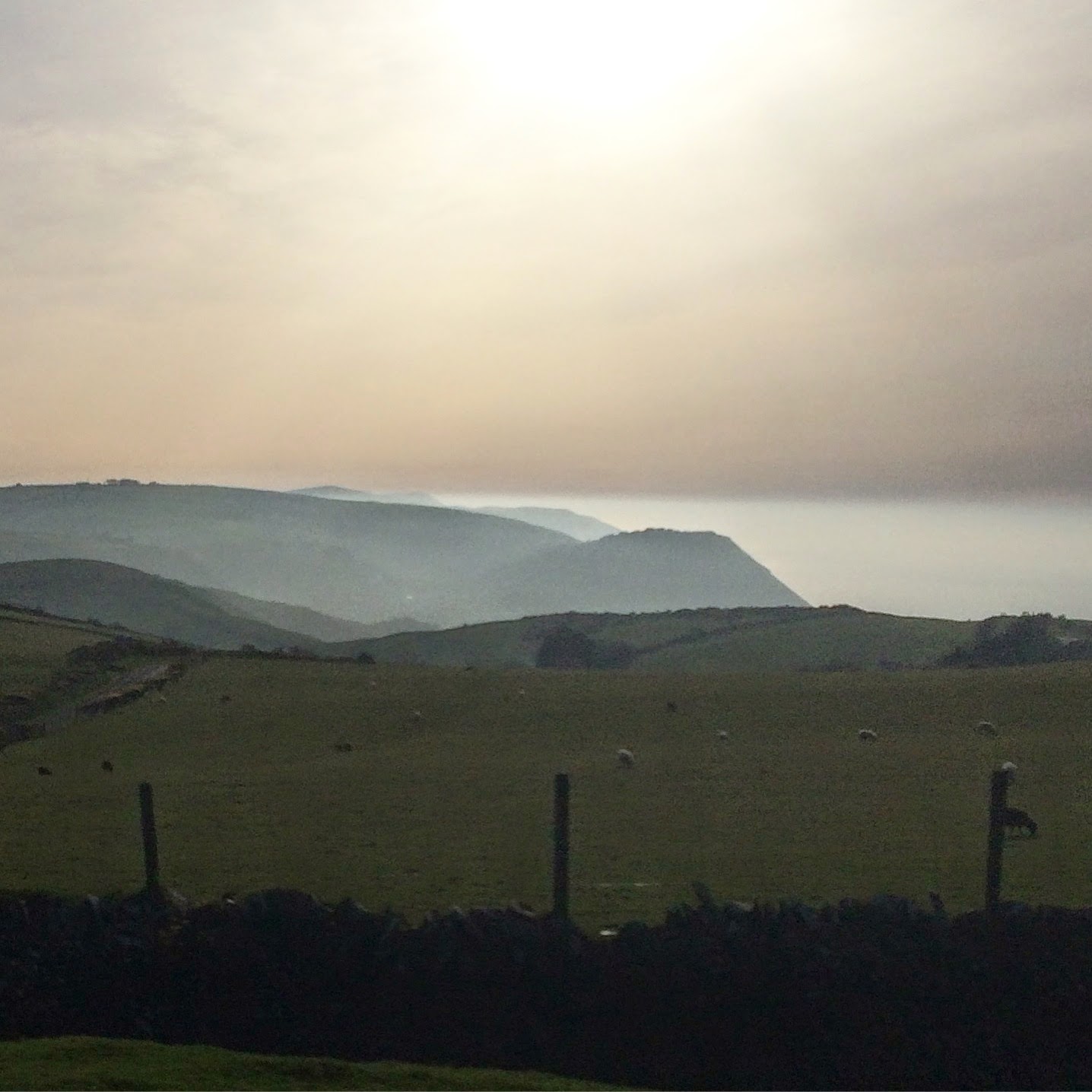 And then on Thursday morning I woke up to the first day of my new life, although I was physically broken, the worst was over and I felt excited and positive for the first time in ages and it was full of exciting new possibilities.

The first was being asked to do a interview for an impressive South African blog.
No 2 was being accepted as a exhibitor at Yarndale 2015, its going to be my first show as a designer and even though I'm so happy to be able to be there its also really scary, there are so many things to think about, I need to start planning now and have already decided I'll dye some yarn to take with me
The photo below is of the NDS stand in 2014. 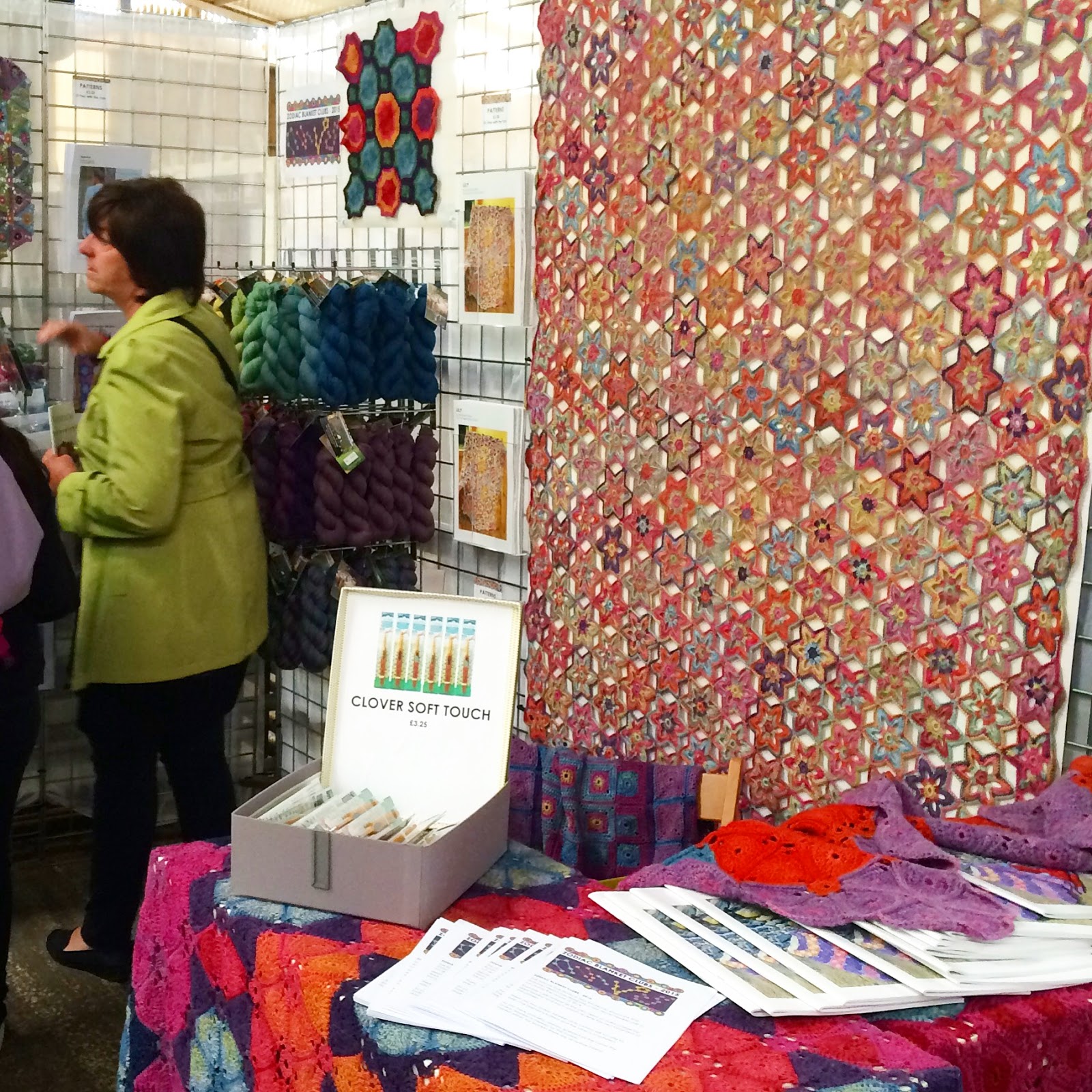 The last possibility is so exciting and I can't wait to break the news to you, but you will have to wait for next week :-)

So back to this week, I'm still recovering from the mega dye session and so a bit blurry as to what to do next, so I wrote a "to do" list, I stopped after 2 pages, because it was beginning to make me panic, this week I will prioritise and fill in all the details and be far more organised. 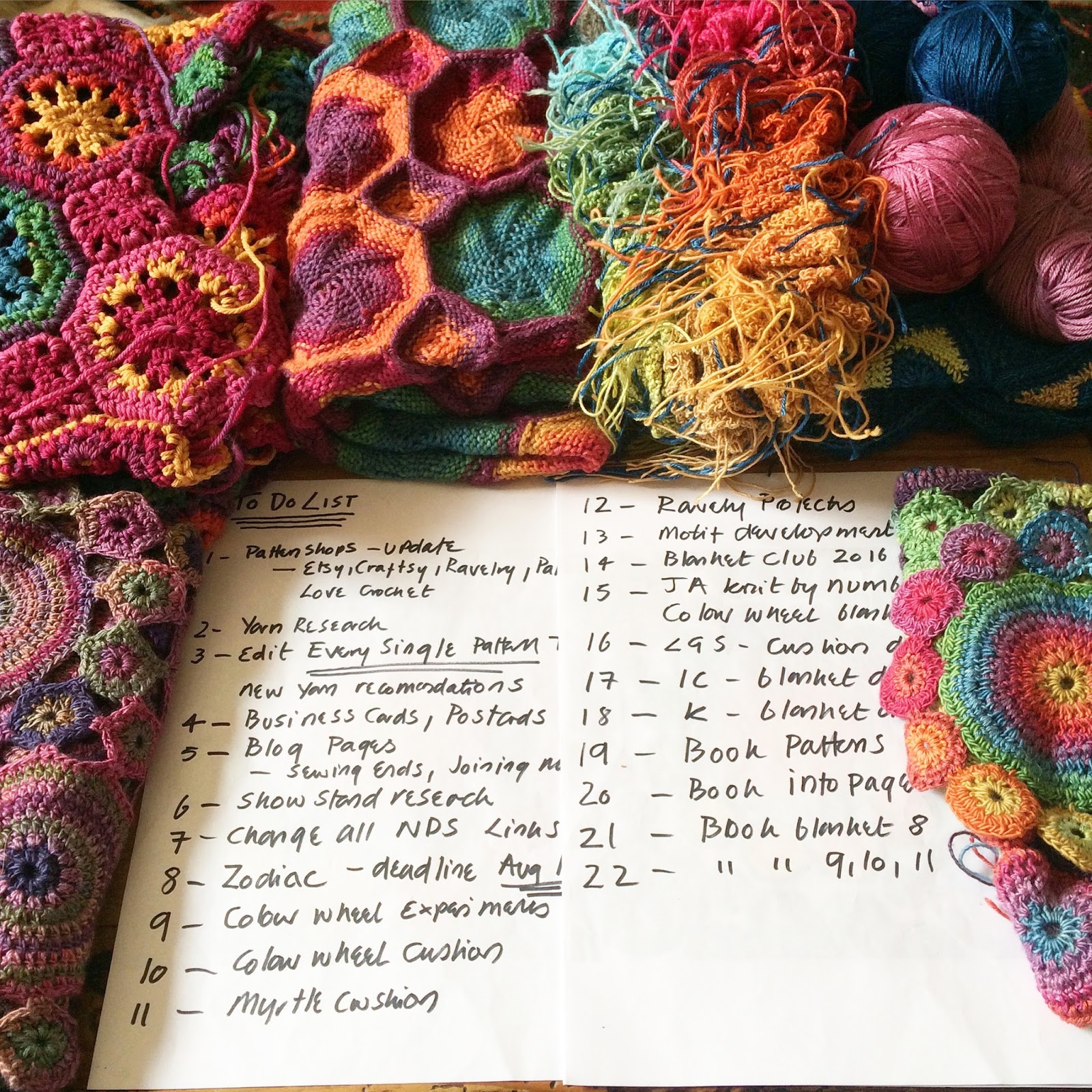 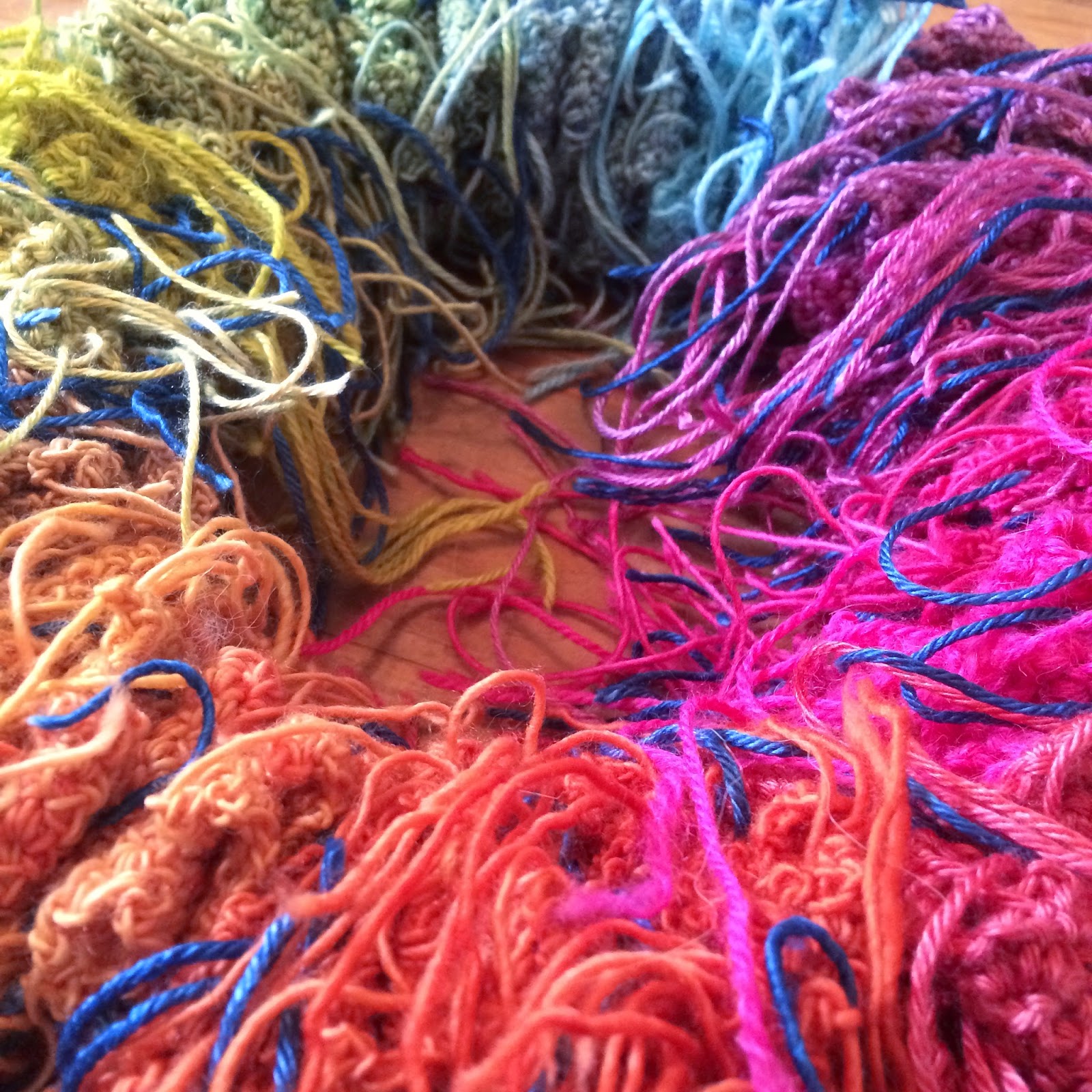 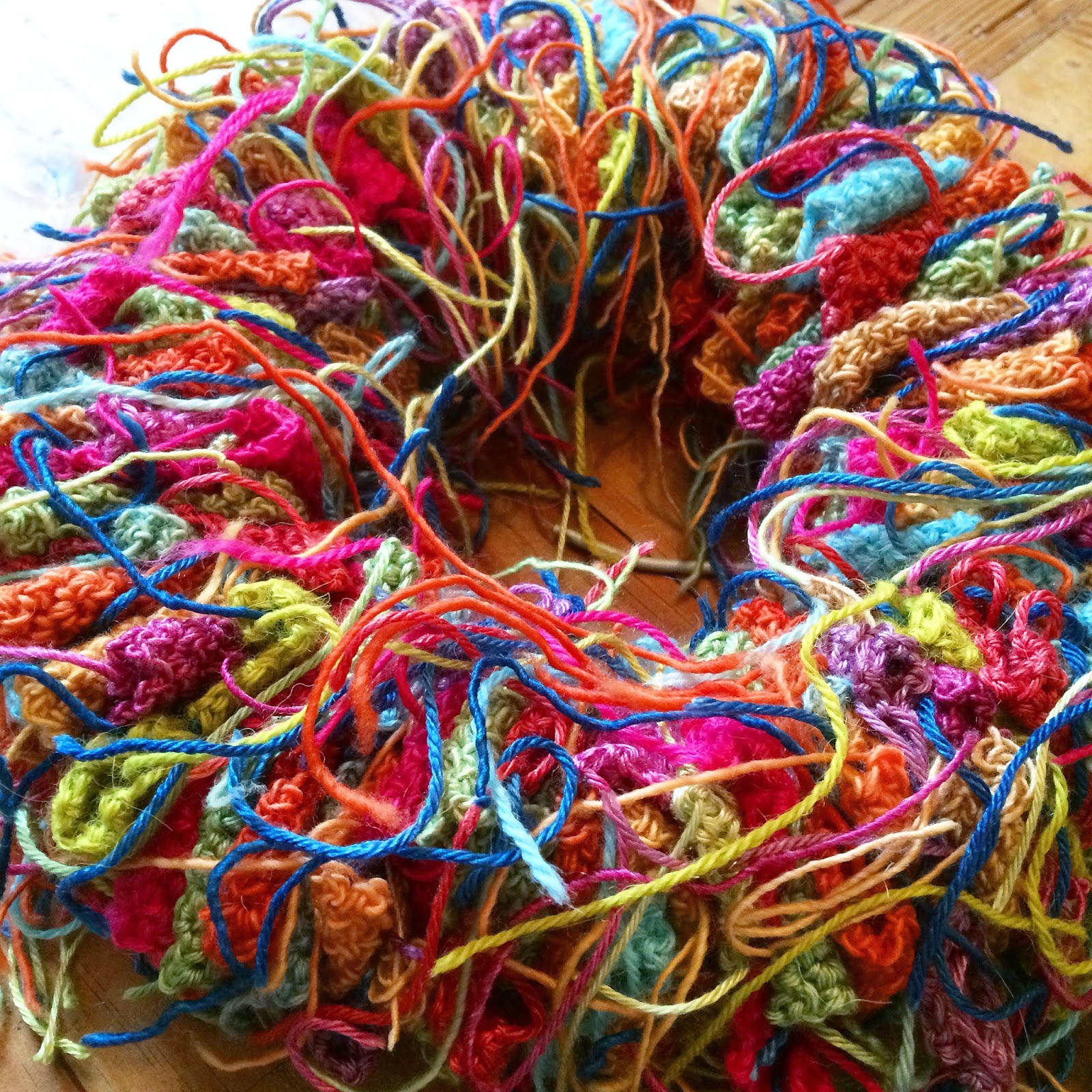 And yesterday we started the long process of deconstruction, cleaning and redecorating the studio.
By the end of the day the dye room looked like this and we'd fill the Beast with dye baths & spin driers, so technically it had become a mobile dye room :-) 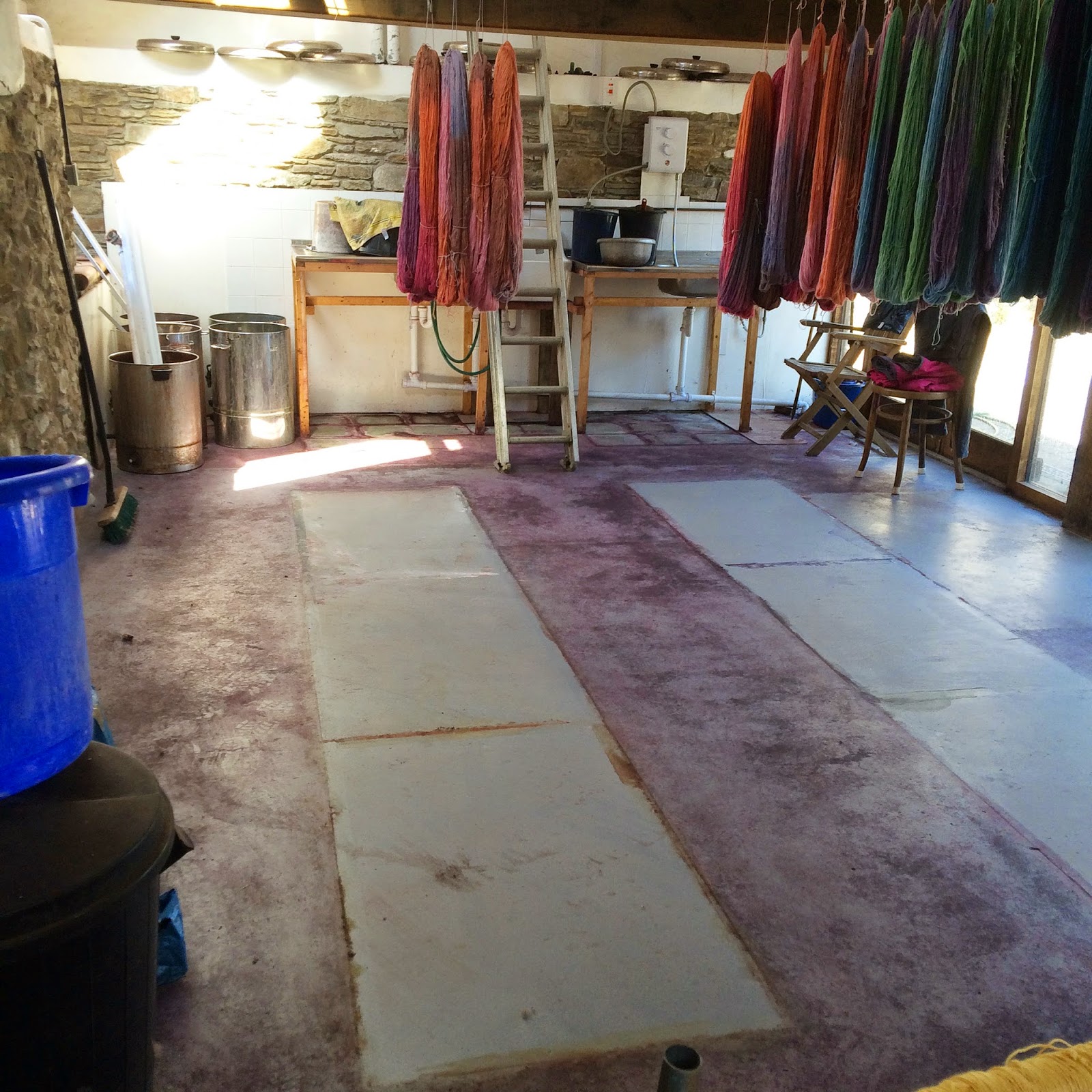 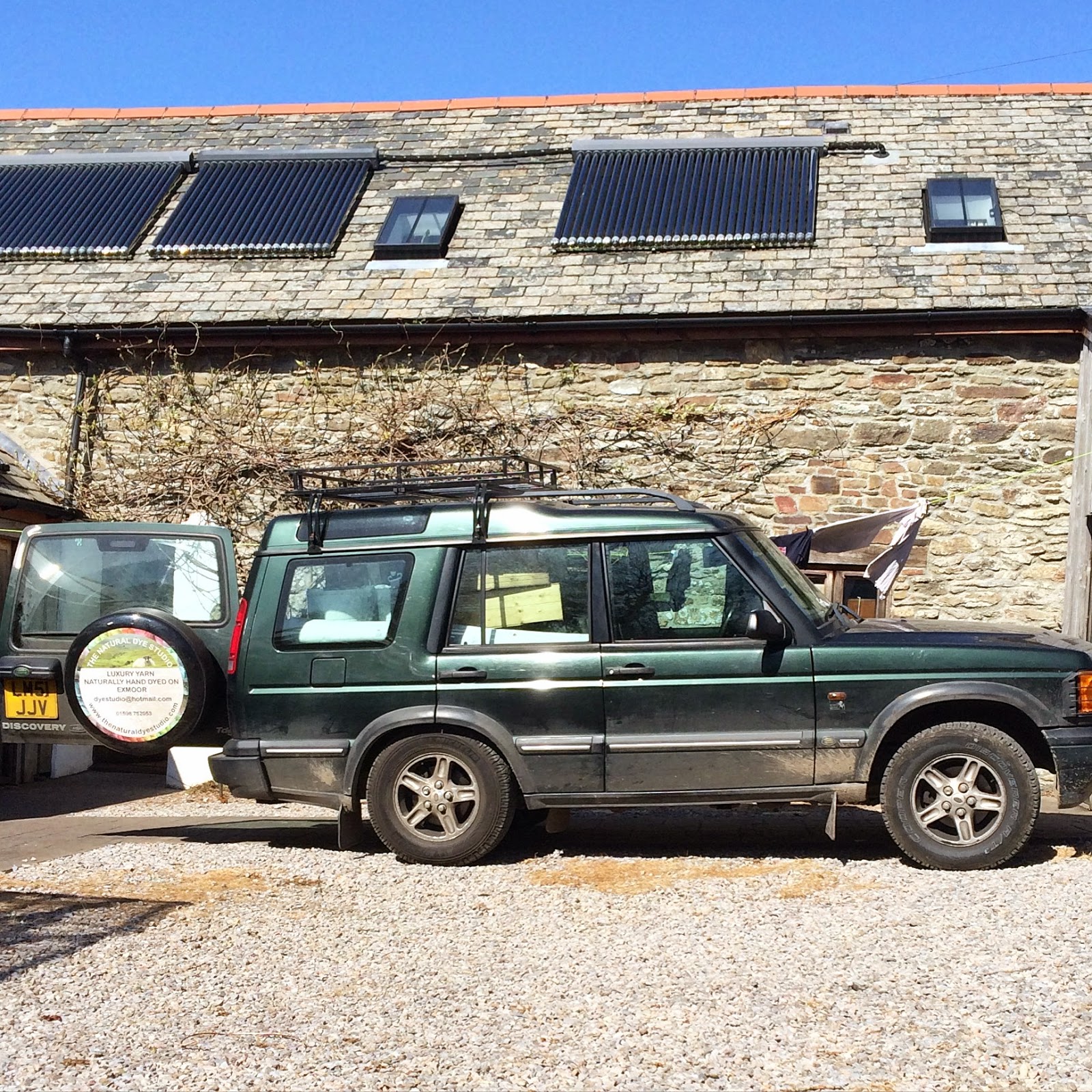