Last week's dyeing schedule was dyeing for NDS's final update.
We started off with 35 kilo's of white yarn and not much idea of what to do with it.
After lots of discussion we decided to dye the whole of NDS's rainbow, so we did :-) 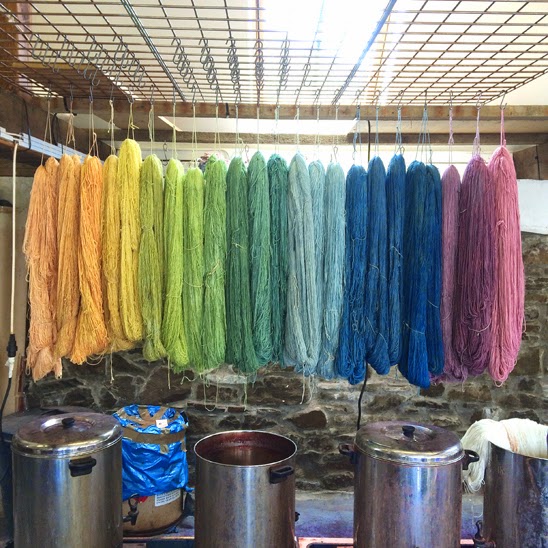 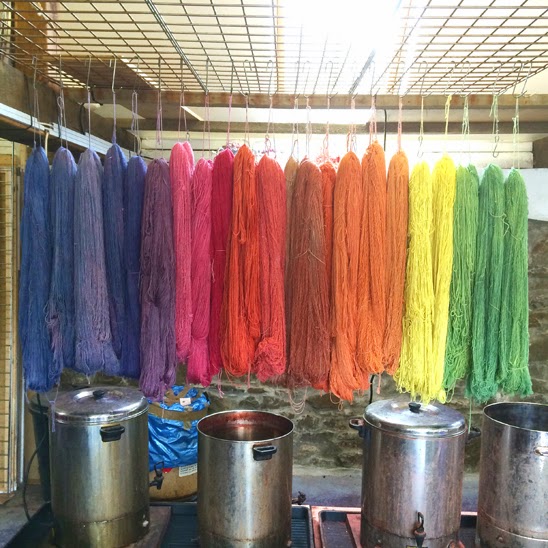 As you can imagine dyeing, washing, drying and winding 35 kilo's is a long process, we still haven't finished dyeing it all and I don't think all of it is going to be ready for this weeks update, so instead of having another last update we will be adding the extra's as soon as we've finished them.
Which means that we will probably still have a few to add early next week, although the sun is shining so they might be ready by the end of this week, who knows... :-)

The designing part of the week started with me publishing April's Zodiac installment, I've sent it to the member's but haven't had the time to add it to Ravelry or Etsy yet. 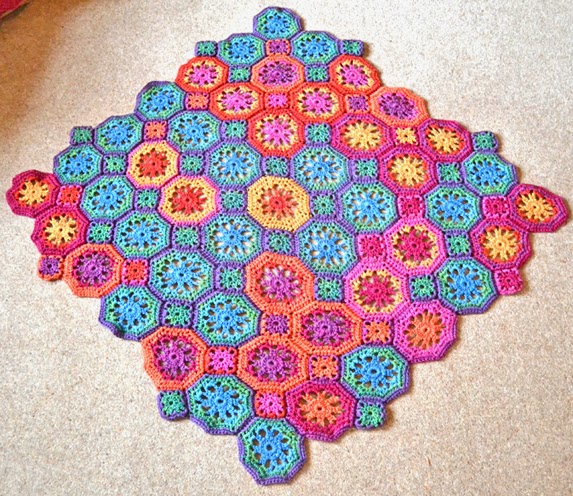 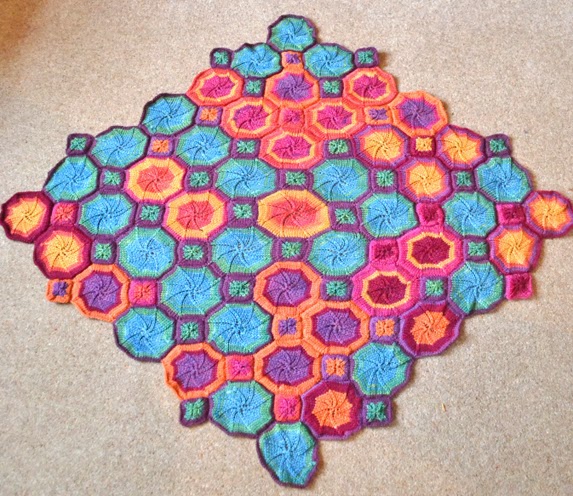 Then instead of concentrating on the things that needed to be done I worked on my colour wheel.
As it had been sitting in a basket for a week I was able to look at it with new eyes and discovered there were a couple of issues/mistakes.
In the first photo you can clearly see that the third round of circles was too big, so I made them smaller, which would mean I had to fit in new fillers to fill the gaps.
Then I realised I had made a mistake and mixed up 2 of the second round circles so they were in the wrong place.
Unfortunately a lot of you couldn't see what I was talking about so I kept posting more photo's to try and show you where I had gone wrong. 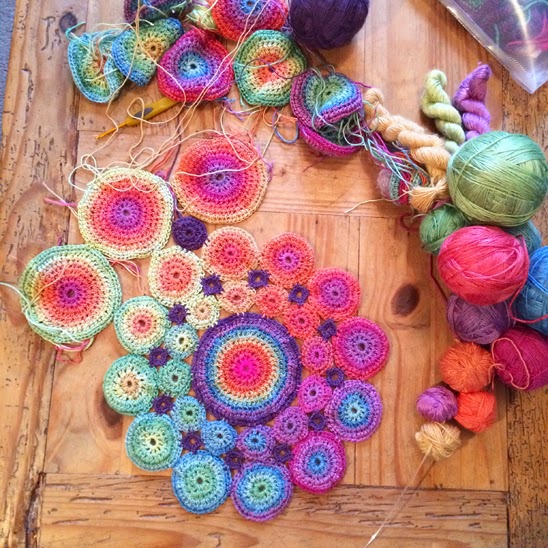 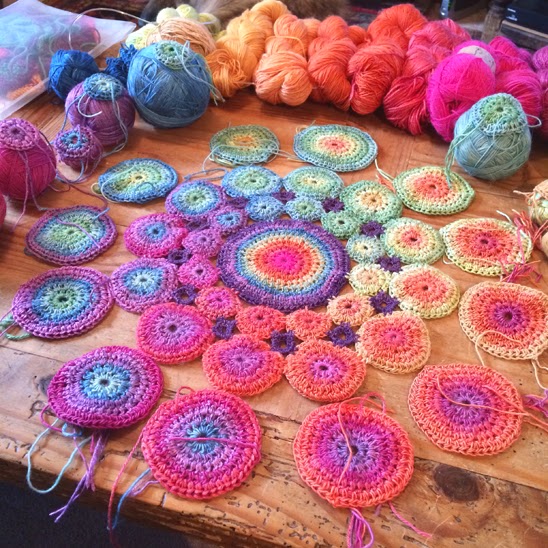 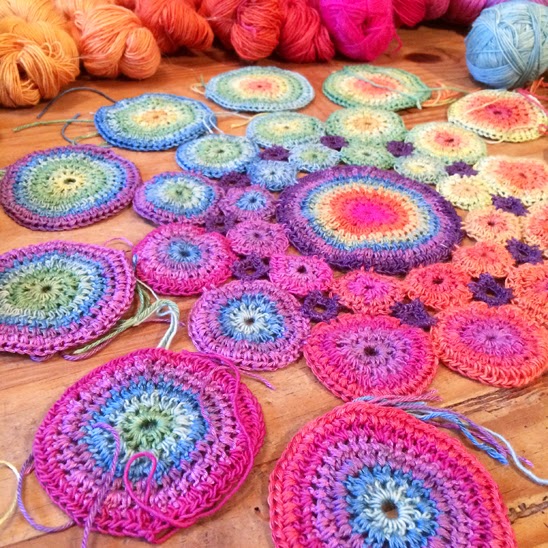 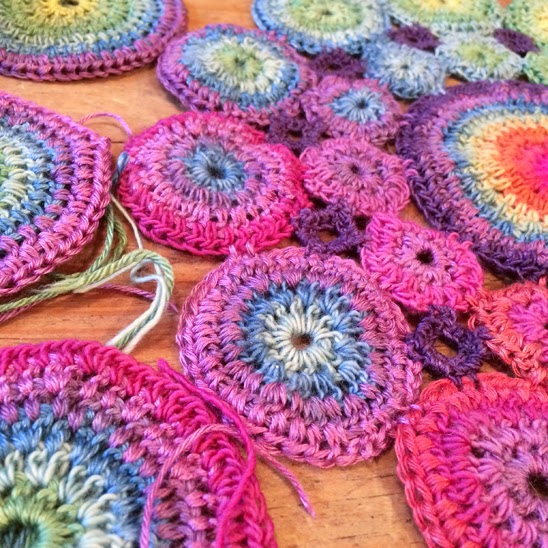 I couldn't decide whether to correct the mistake or not, so I thought I would carry on crocheting to see if when I added the fillers it would be noticeable in the final piece.
And it is, also I am not happy with the look of the wheel, the fillers pull the circles out of shape and you can clearly see where the circles are joined, its far too messy for my liking, so I need to do a new colour wheel (or 2).
I realised that this swatch was not going to be a blanket because I was unhappy with it, so I have decided to publish it as a cushion cover.
Maybe there will be a series of cushion covers before I finally settle on a design I am happy enough with to put the time into a blanket. 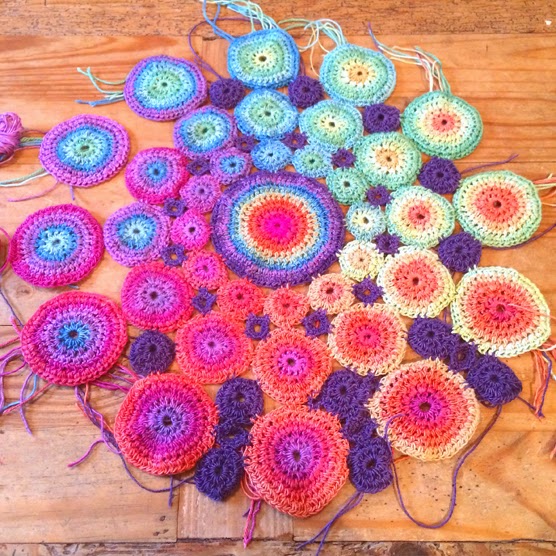 I went for a wool walk on Saturday.
Starting off at Lynton Town Hall which is at the end of my road and finishing at the Iron age hill fort on the top of Hollerday Hill. 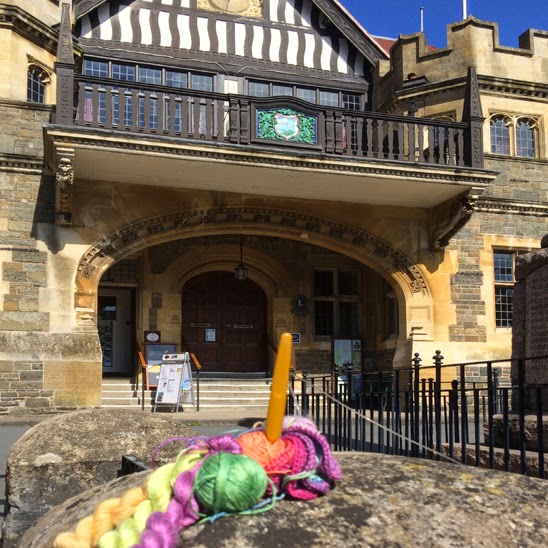 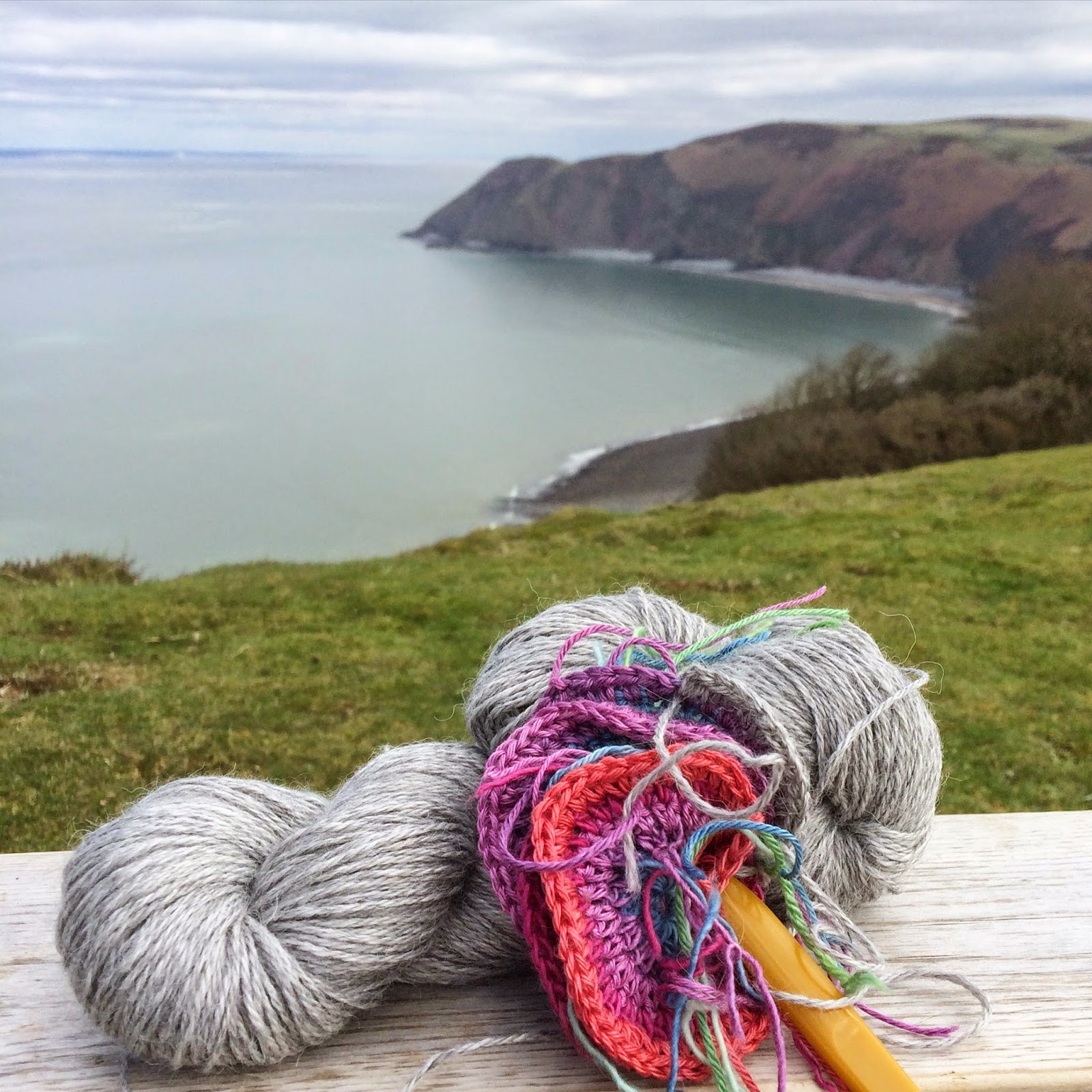 As my big girl had come to visit us for Easter I took the whole of Sunday off.
We had lunch at The Hunters Inn in Heddon Valley.
Its an amazing place, a hidden river valley full of peacocks, so far off the beaten track that its quite difficult to get to, but has a beautiful hotel with a huge beer garden that is perfect for sunny afternoons.
A lot of the valley is owned by the National Trust so is normally quite busy with walkers in the summer.
It looks misty in these photo's, but was actually quite sunny and warm and of course I took my crochet! 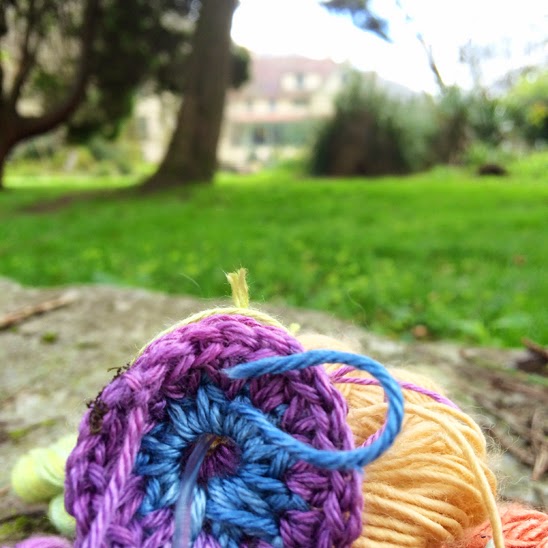 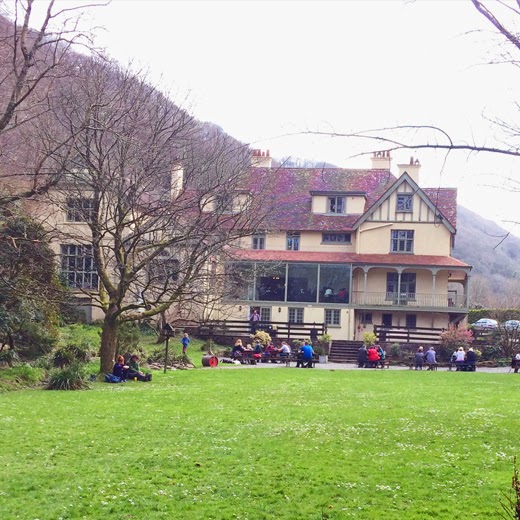 Then my crochet had a little bit of a pub crawl with Tinks and Me and Daisy and her boyfriend Adam.
Poor Phil missed out as he had to take our big girl back to Taunton to catch her train back to London.
Our first (or second if you count Hunters Inn) stop was the Beggars Roost, which is just round down the lane from our dye studio and has just reopened after being closed for several years. 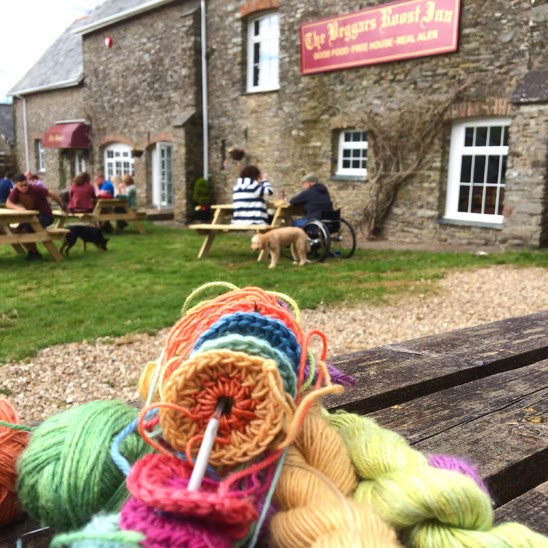 Our next and final stop was The Rising Sun in Lynmouth which is our "local", I had a lovely wool photo set up, but my stupid iPhone battery died, so I wasn't able to take it.

Yesterday I mended my mistake and did a bit of gardening in my tiny courtyard, with my helpful assistants who take up the whole courtyard!
Its not easy re-potting and pruning when you have to keep moving a giant German Shepard! 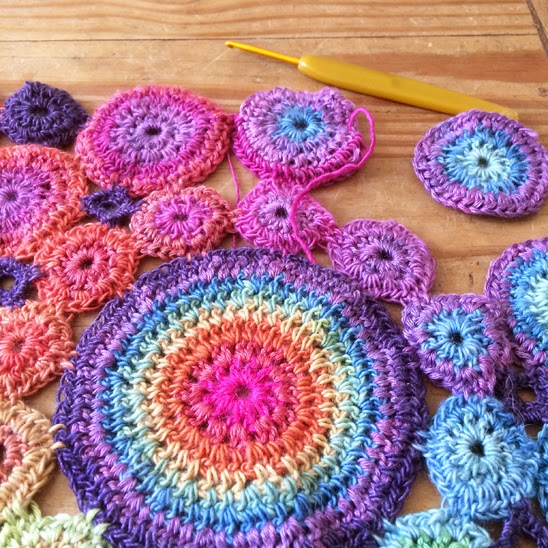 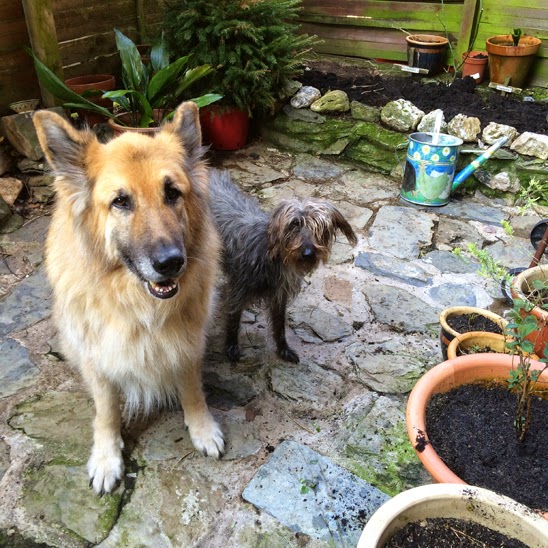