At the beginning of last week began with me deciding for the third time that book blanket number 8 was wrong and that I had to rethink the colours again!!
When I compared version 1 with version 2 I realised that it was the indigo rather than the other colours, it looked dirty against the other colours, like faded jeans and the darker background was what I liked best about version 1.
So more frogging ensued and then some new swatching, which I am 100% happier with.
I also added some extra colours, version 2 had 9 colours, version 3 has 19!
I'm beginning to realise removing colours from a blanket is a bad idea, when I'm not happy with a design I need to add rather than subtract colour. 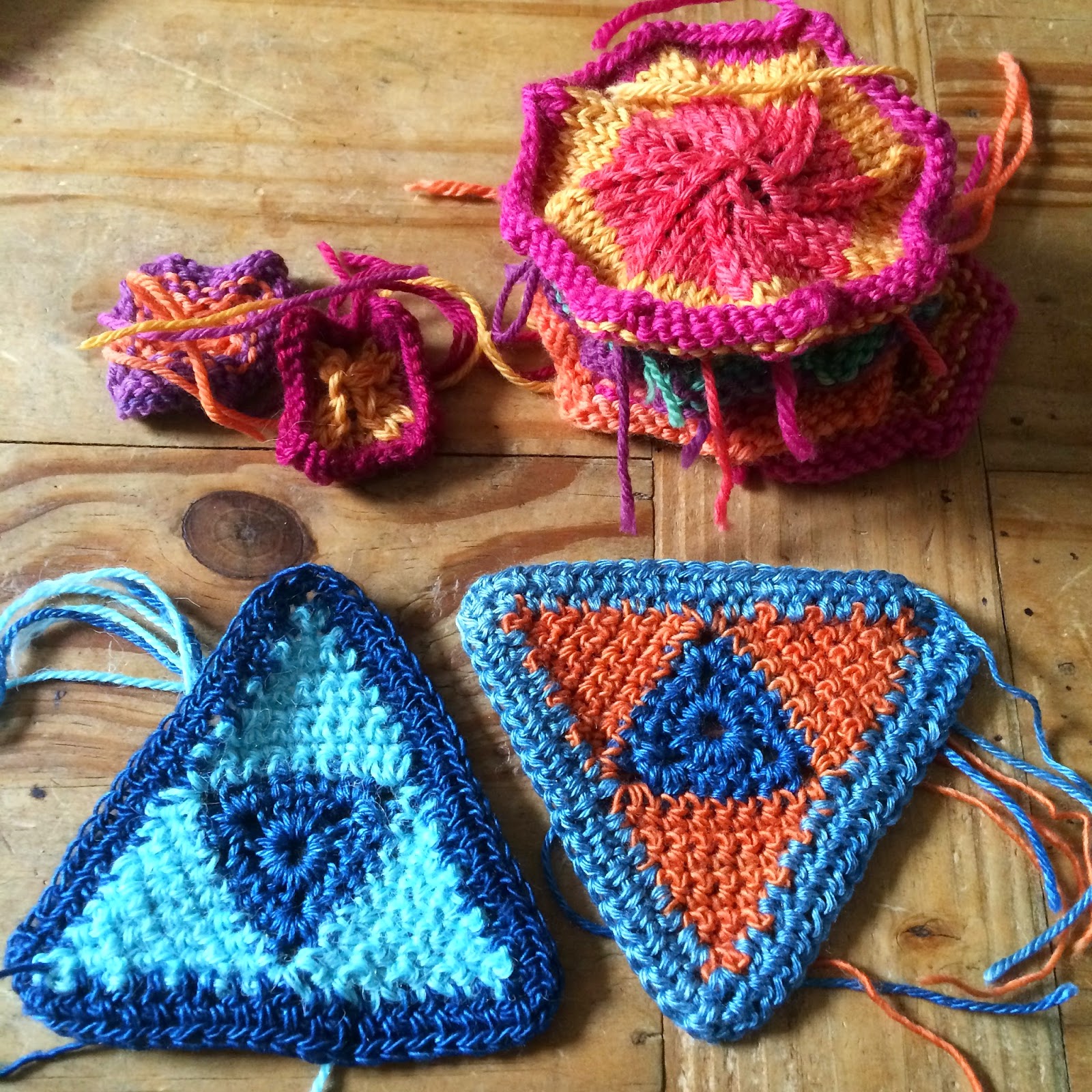 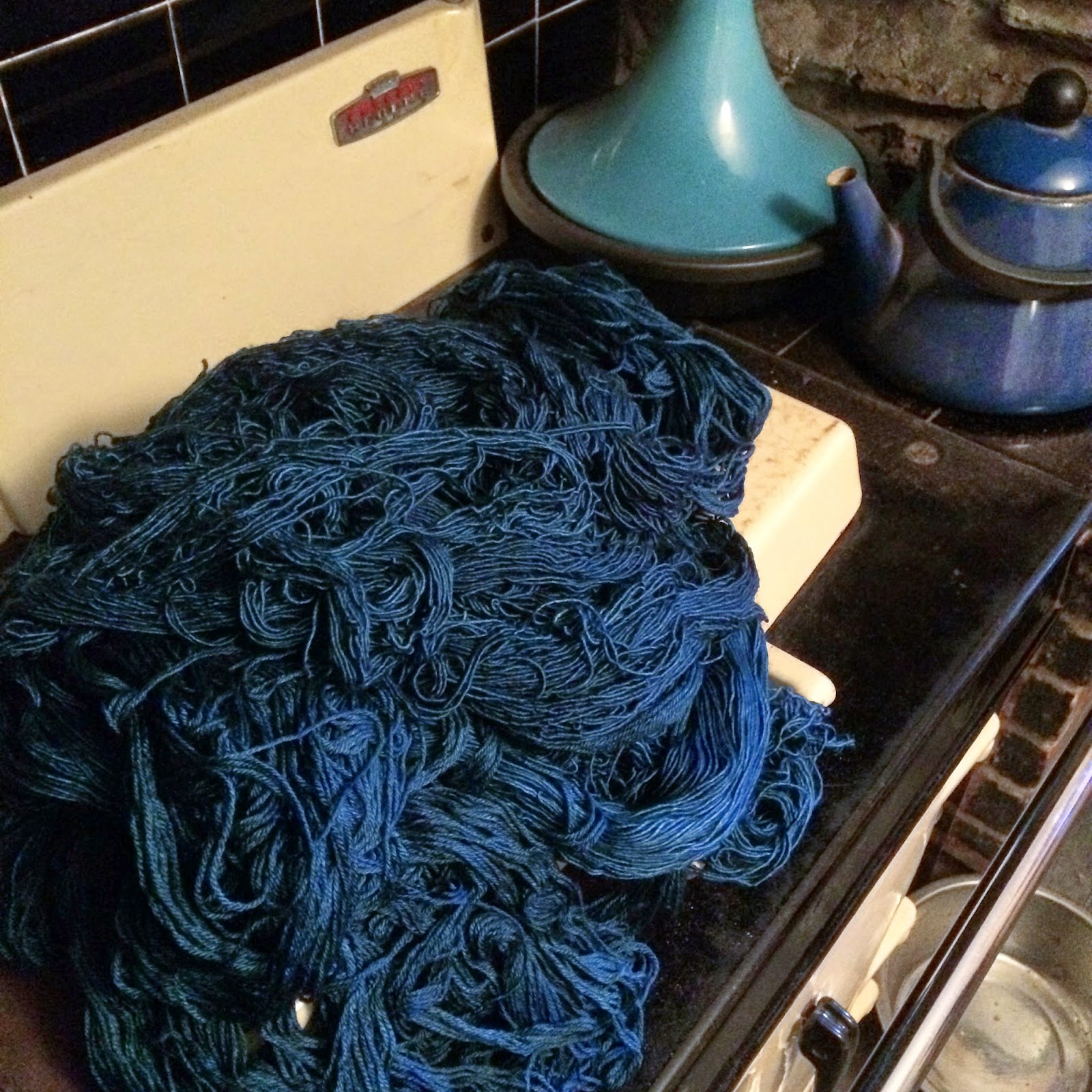 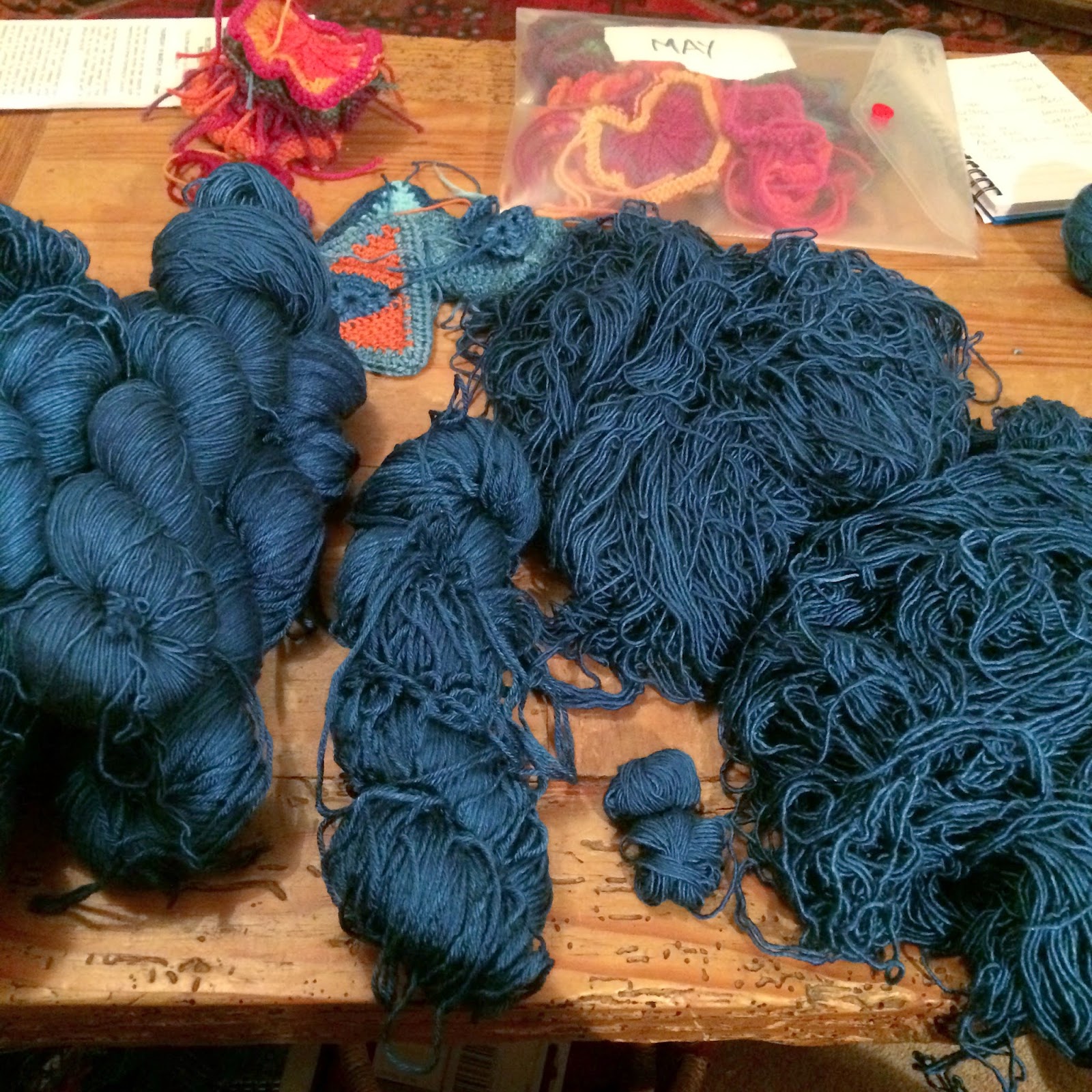 The rats nest is surprising satisfying to work with, luckily I make motifs, so I can just pull a strand until it stops moving, break it, make a motif and then pull another strand. I've already used one of the 100 gms nests and started the next nest.

On Monday, Tuesday and Wednesday we dyed the next 30 kgs and Tinks guarded the wool from potential wool burglars. 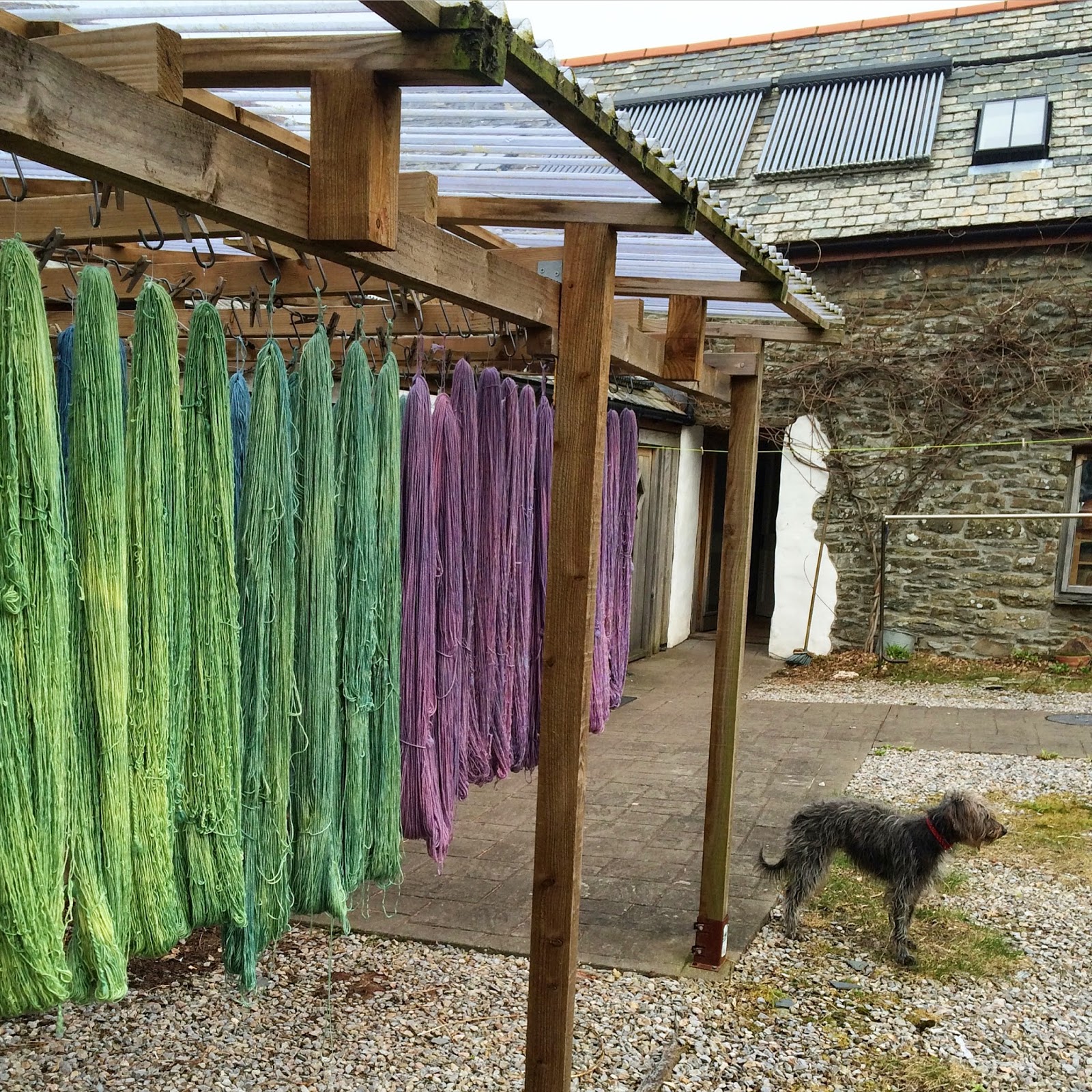 On Thursday I edited about 50 wool photo's, and I looked out the office window at the sun.
Our Exmoor internet slug was chewing up the bandwidth and it took me all day to edit and load them onto the website before the Thursday night update. 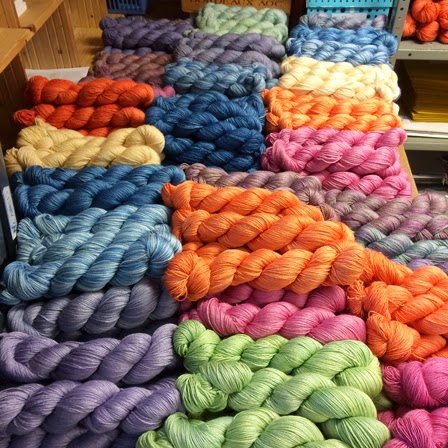 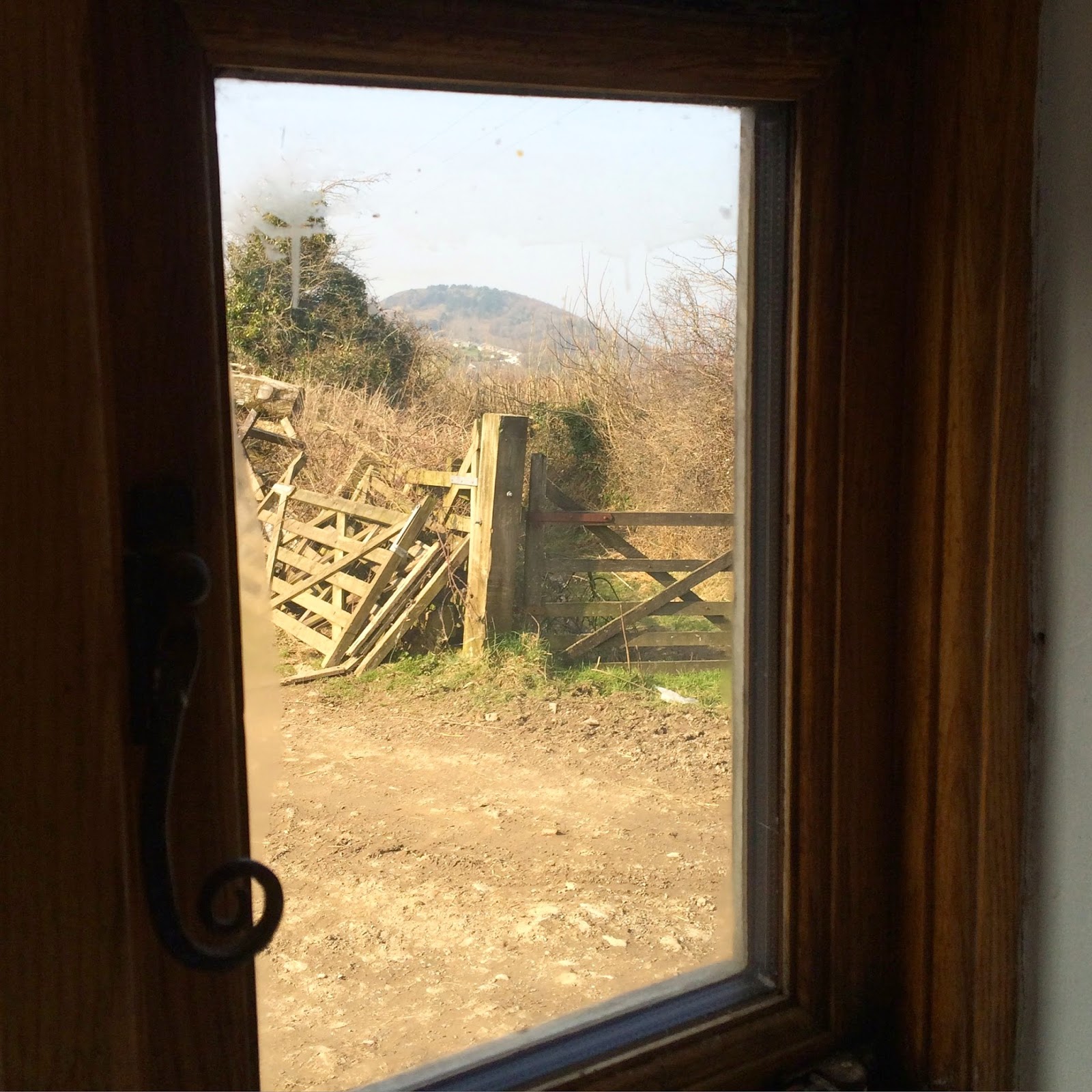 Friday was a designing day, also the eclipse day, I knew I couldn't look at it and so there for was desperate to look, so I stayed inside, Tinks guarded the window to stop me being stupid and making myself blind. 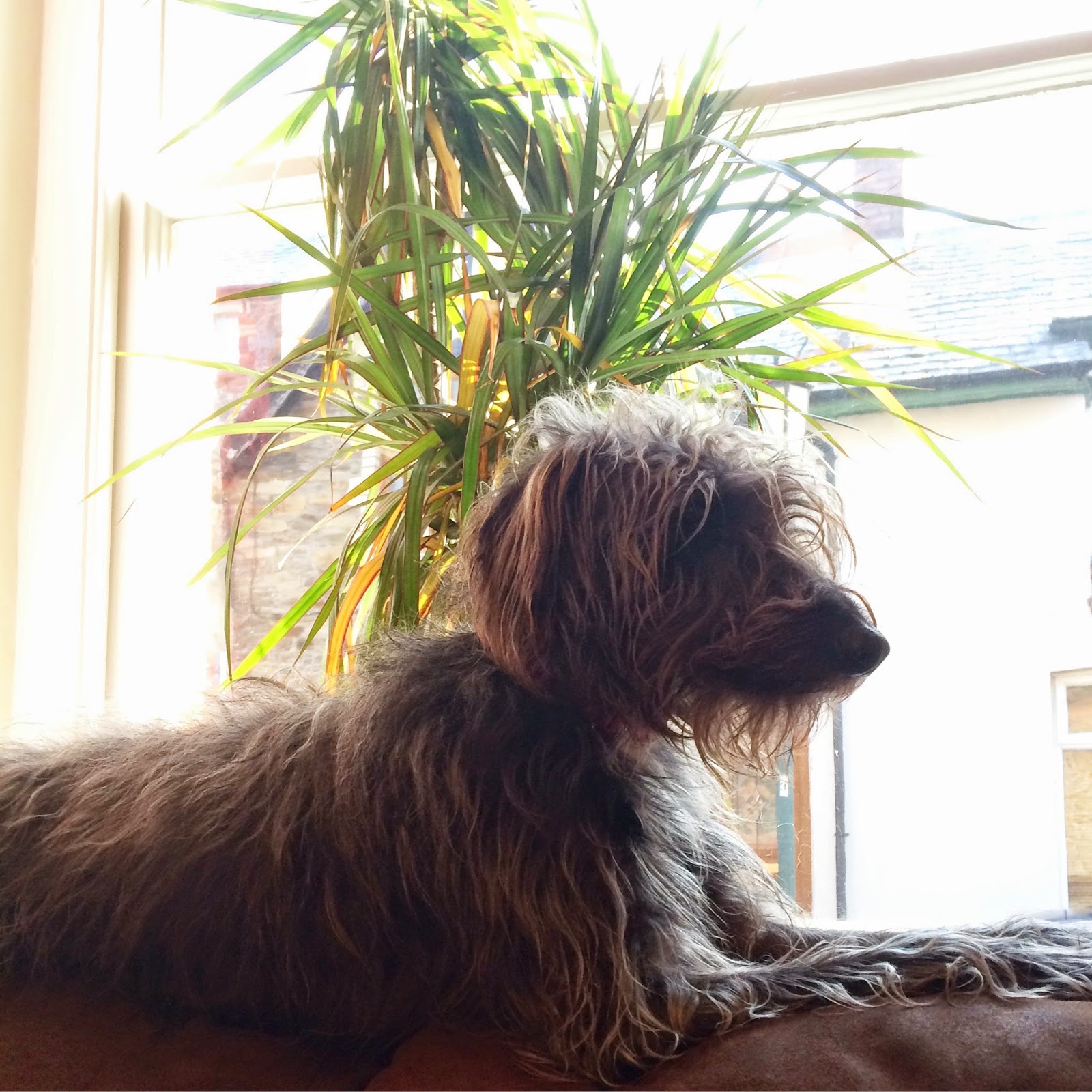 I spent all day making these tiny circles for my "colour" page. 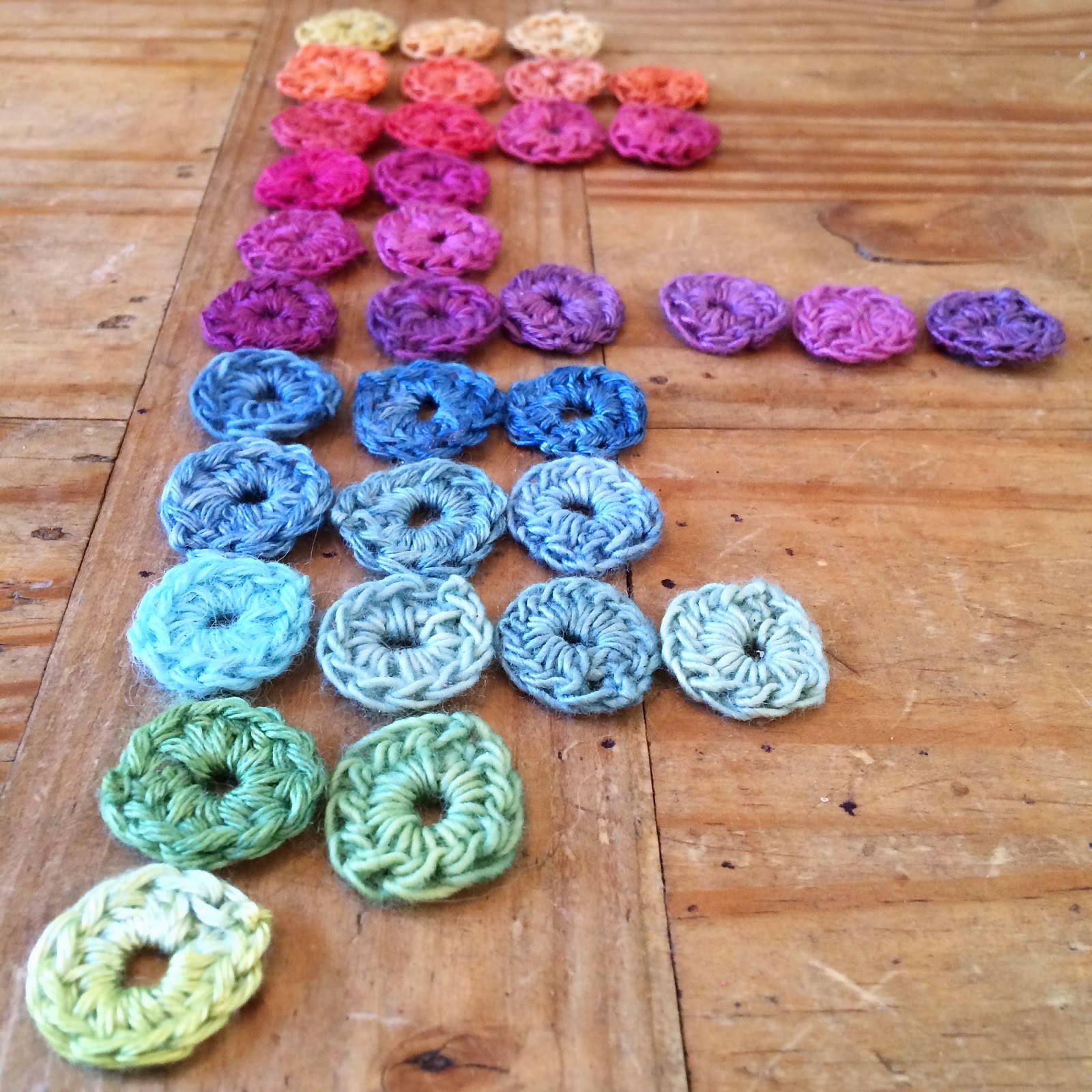 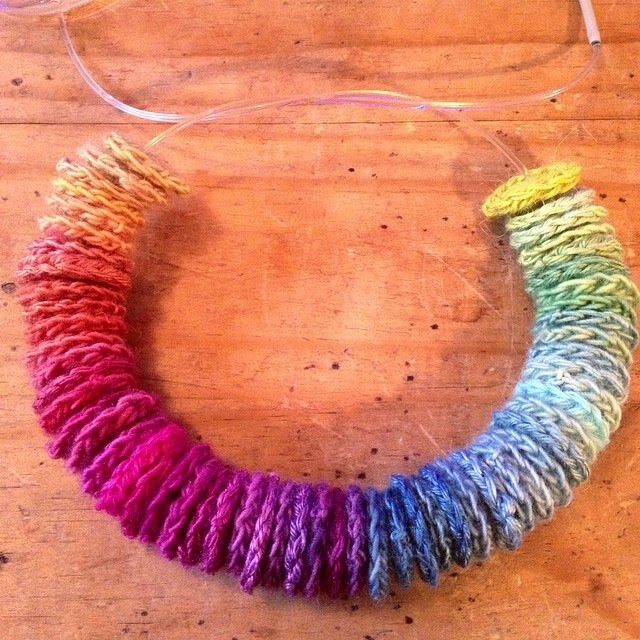 Then we went to the pub and looked at the really high tide, the tide kind of made up for the fact
I hadn't seen the eclipse.
Tish brought her brand new puppy for his first Friday night and so there were lots of puppy snuggles.
Orion is Rottweiler/Great Dane cross, so is going to be gigantic 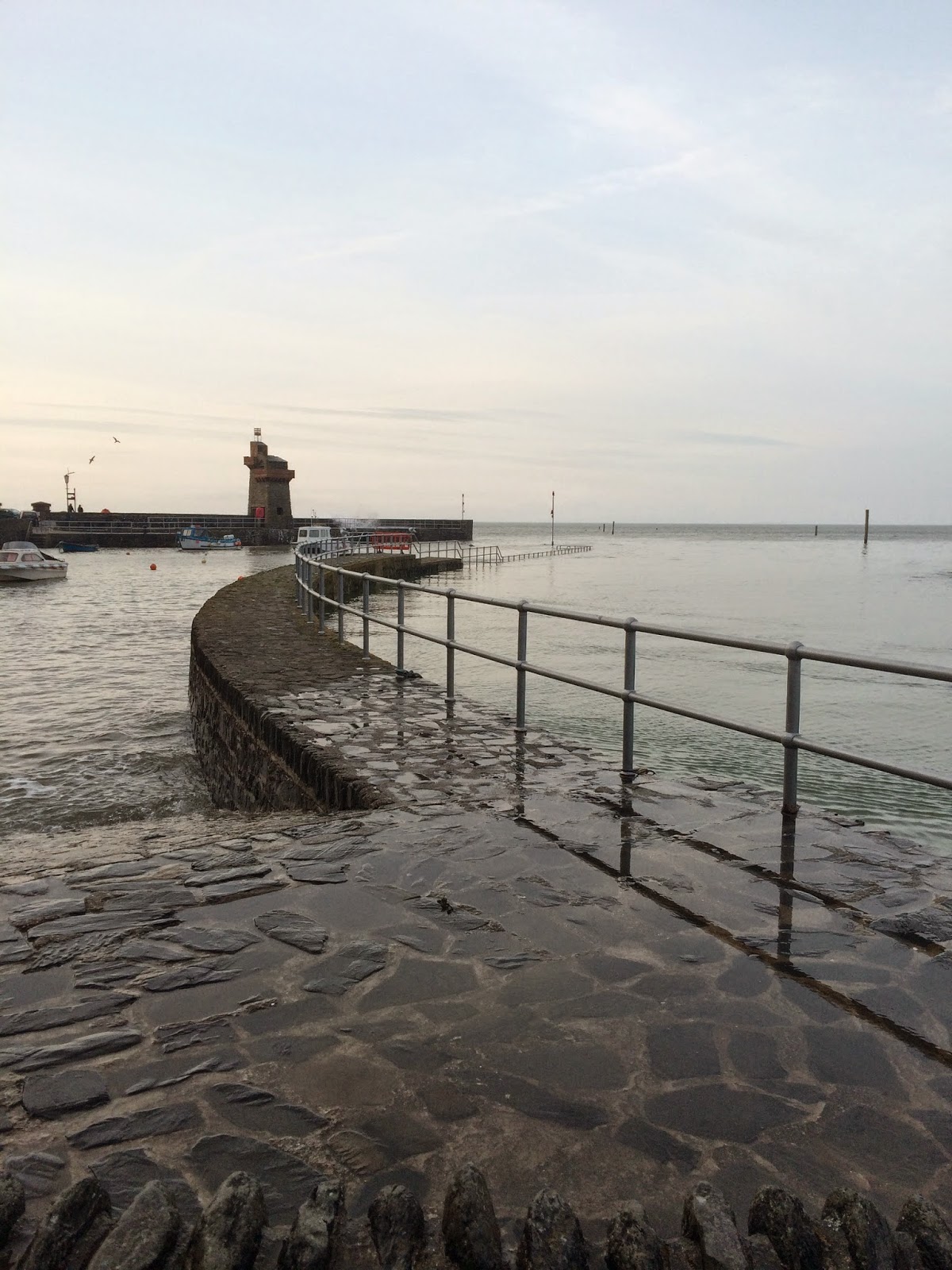 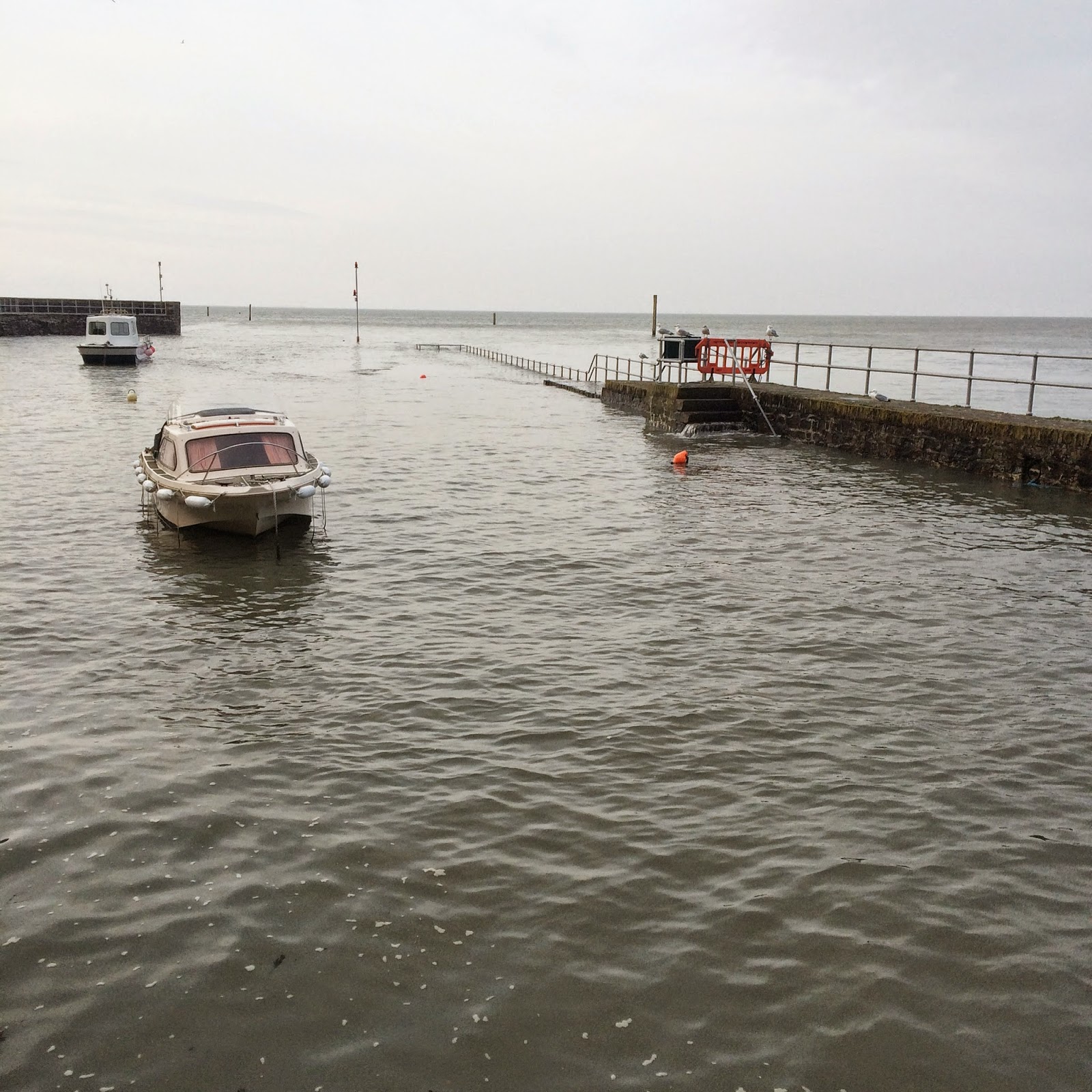 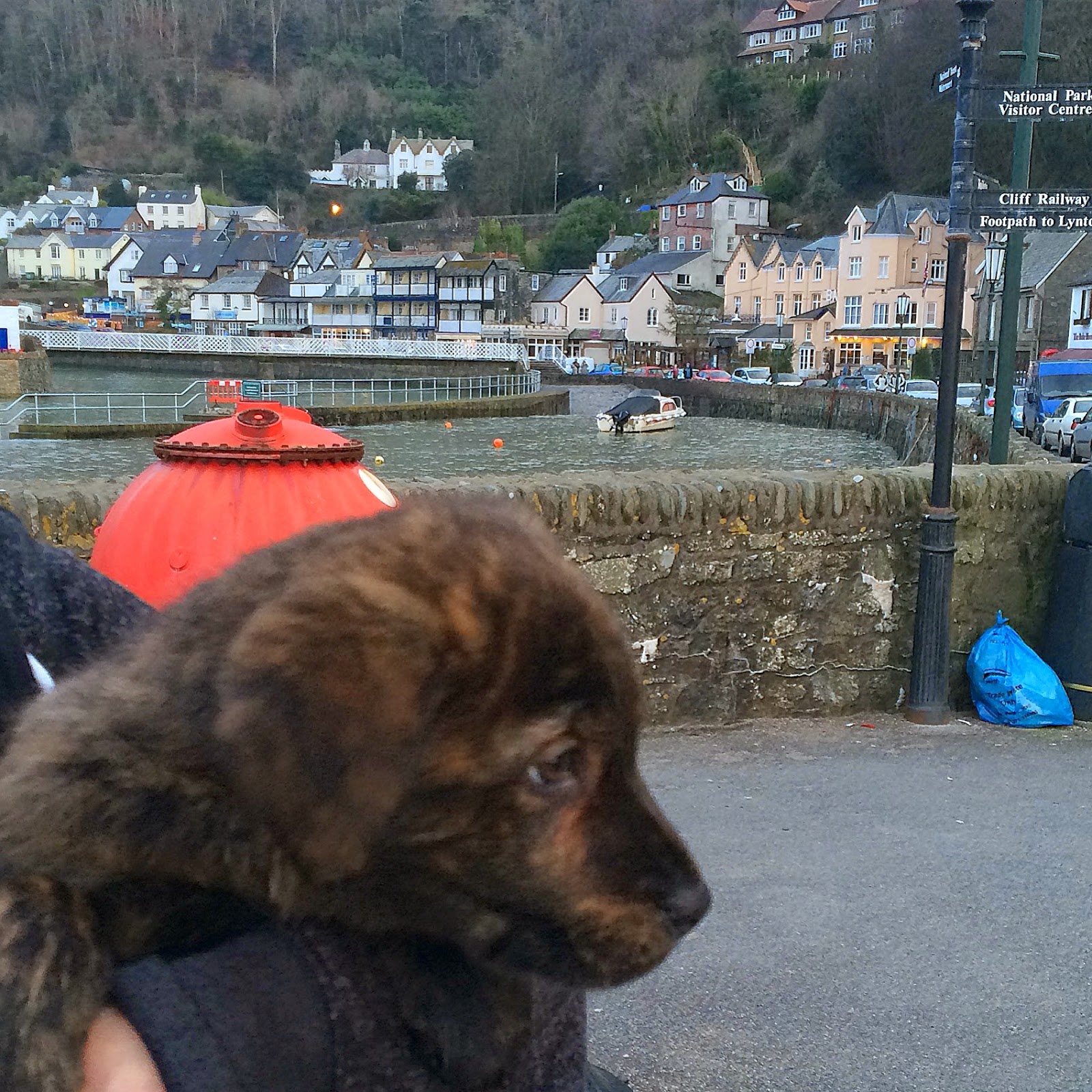 On Saturday I discovered someone had taken my tiny colour circles idea and posted it as their own.
I know this kind of thing happens all the time, but I find it incredibly upsetting, I put my heart and soul into what I do and would never copy anyone else without their permission or give them credit for doing it first.
I've blogged about being copied before and had numerous comments from people saying "imitation is the sincerest form of flattery", which is probably true, but I find very difficult to accept.
Its so difficult to explain how much it hurts, one comparison that might make sense is culture's who believe that having their photograph taken is stealing part of their soul.
I know I'm being a bit extreme, but this moment in time life is emotionally difficult for us, I am closing NDS which has been part of my life for so long and I already feel that I am losing part of myself, so losing an idea just makes it worse.

Anyway I decided to cheer myself up with a long walk up Hollerday Hill in the sun with Tinks and my Rainbow to take lots of photo's. 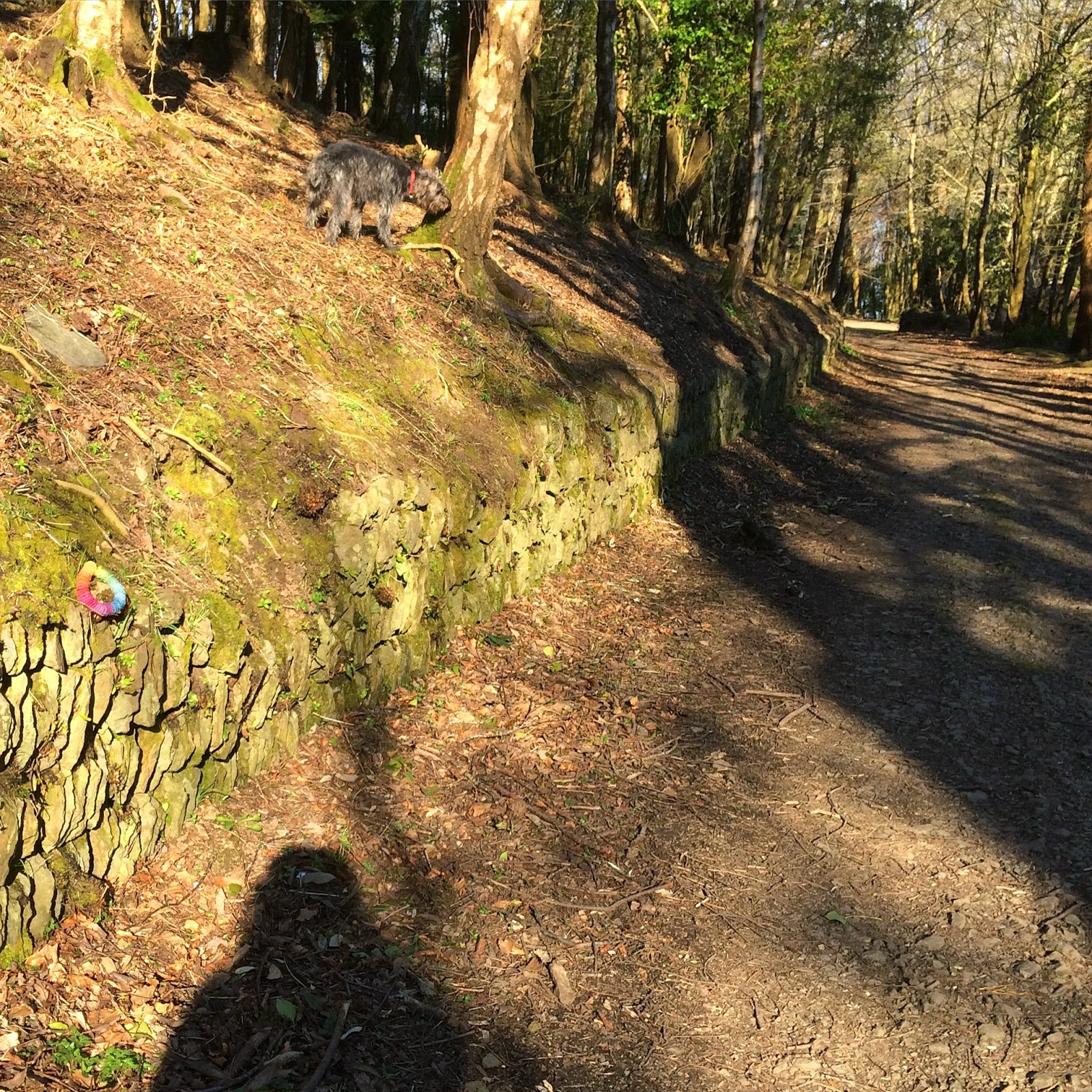 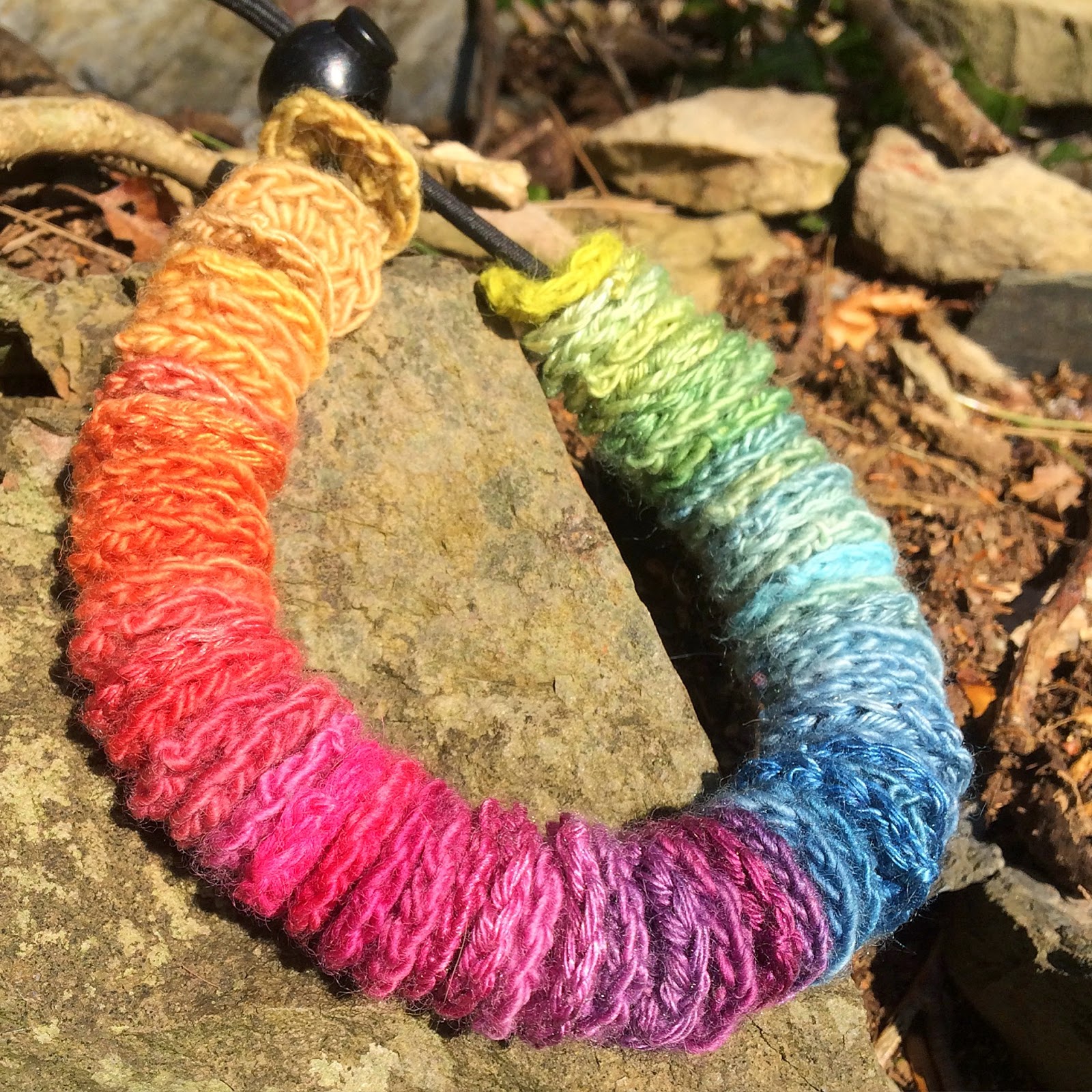 Because however much you take from me I have this in my life which fills my heart and makes me happy. 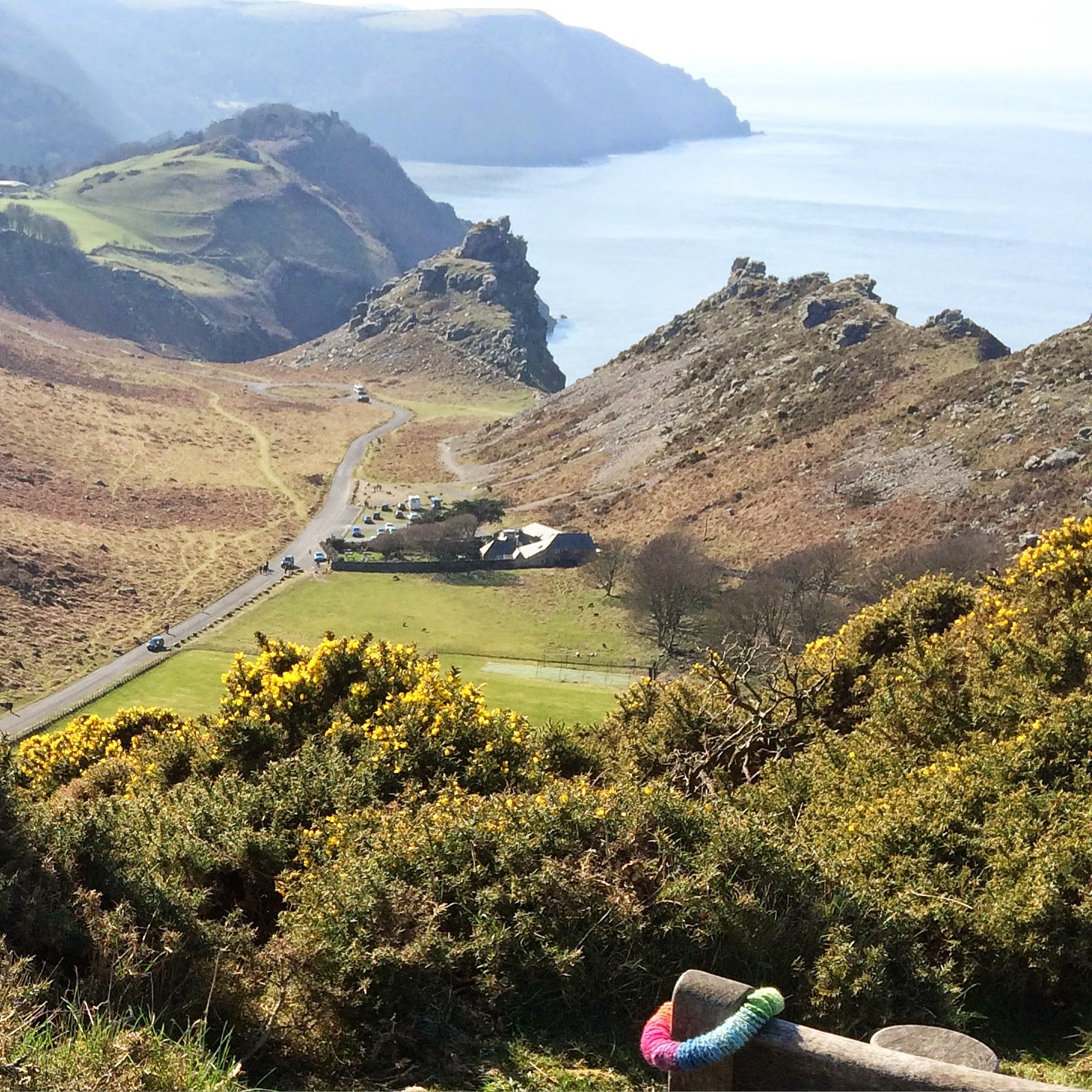