As we get closer and closer to the end of NDS I am becoming more aware of my need to blog, after all this blog will become my main site when the NDS website is closed.
But we are so busy preparing for the end of NDS and dyeing our last mountain of yarn that I just don't have a minute to spare, plus my brain is so full of wool that I don't really have much to say.

However I am finding the time to post on Instagram, as its just one click of the camera and a sentence description.
My new cunning plan is to try and write a blog post every Monday about my previous week on Instagram including a selection of the photo's maybe even some unpublished ones with a few extra sentences.
If my cunning plan works I might even continue with it after NDS has gone, it is a diary of my life and makes blogging a lot easier as I don't have to come up with new things to say.

So without further ado here are my last week's photo's (I've included a couple from the week before because it was the weekend and I take more photo's over the weekend due to the fact I am working at home and having more time to photograph what I'm doing.

The day's are getting longer, the tourists are beginning to reappear, I guess even though there's still several months to go summer is on its way.
Although you can't see them in this photo, the surfers were out, which seemed odd because the sea was quite calm, obviously the surf was better than it looked. It was a Zodiac weekend, I spent nearly 2 day's working on April for both blankets.
I am struggling to keep up with Zodiac, I really hoped I would of finished the crochet blanket by now and would only have Phil's knitted blanket to sew the ends in and crochet together.
But in reality Phil is now knitting July and I'm still sewing April's ends in,
I have my fingers crossed that once NDS has gone I can concentrate on both Zodiac's and get them finished by the summer.
These 3 photo's are of the weekends progress, April knitted and Crocheted versions waiting to be constructed and the 3rd photo is of April finished and the knitted May motifs waiting to have their ends sewn. 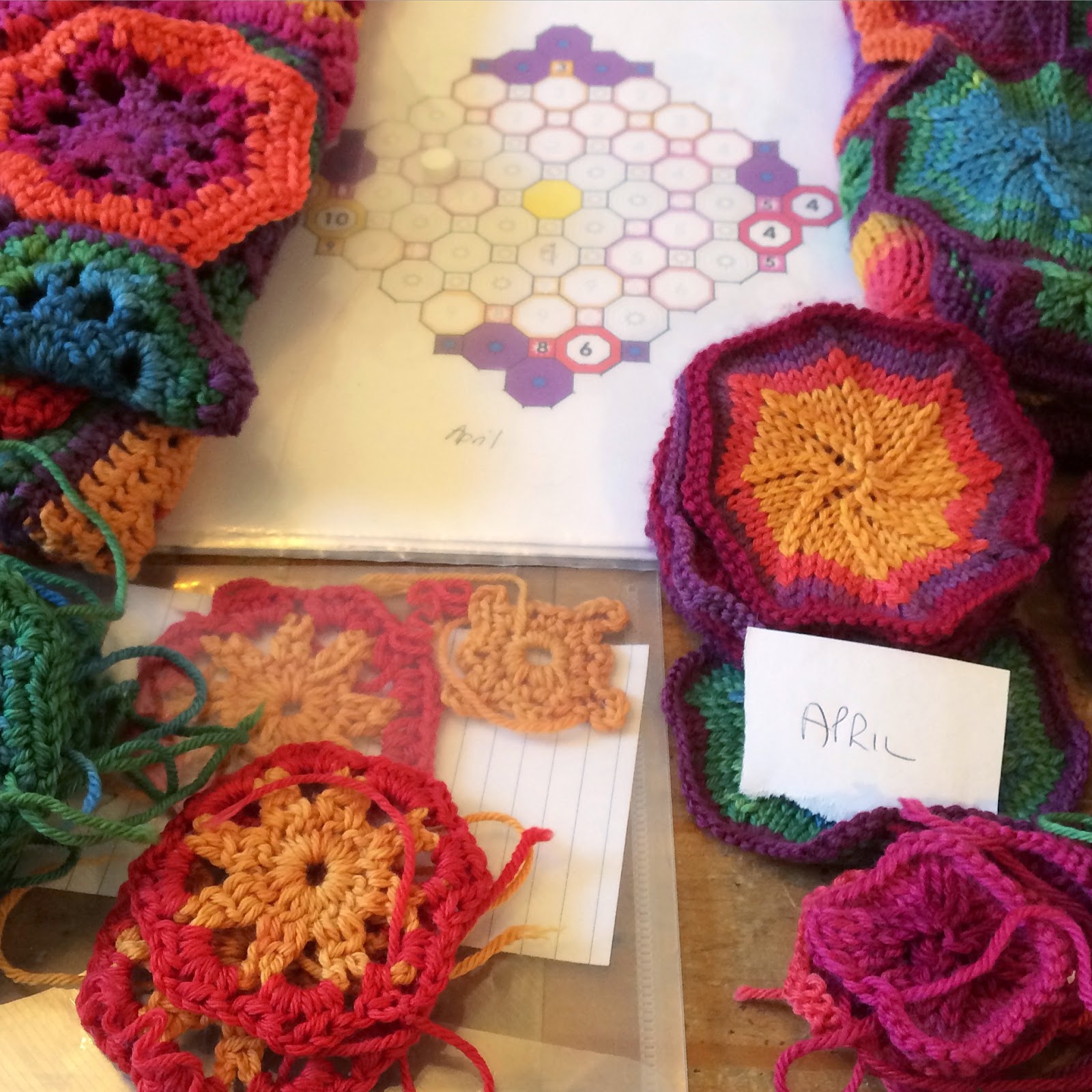 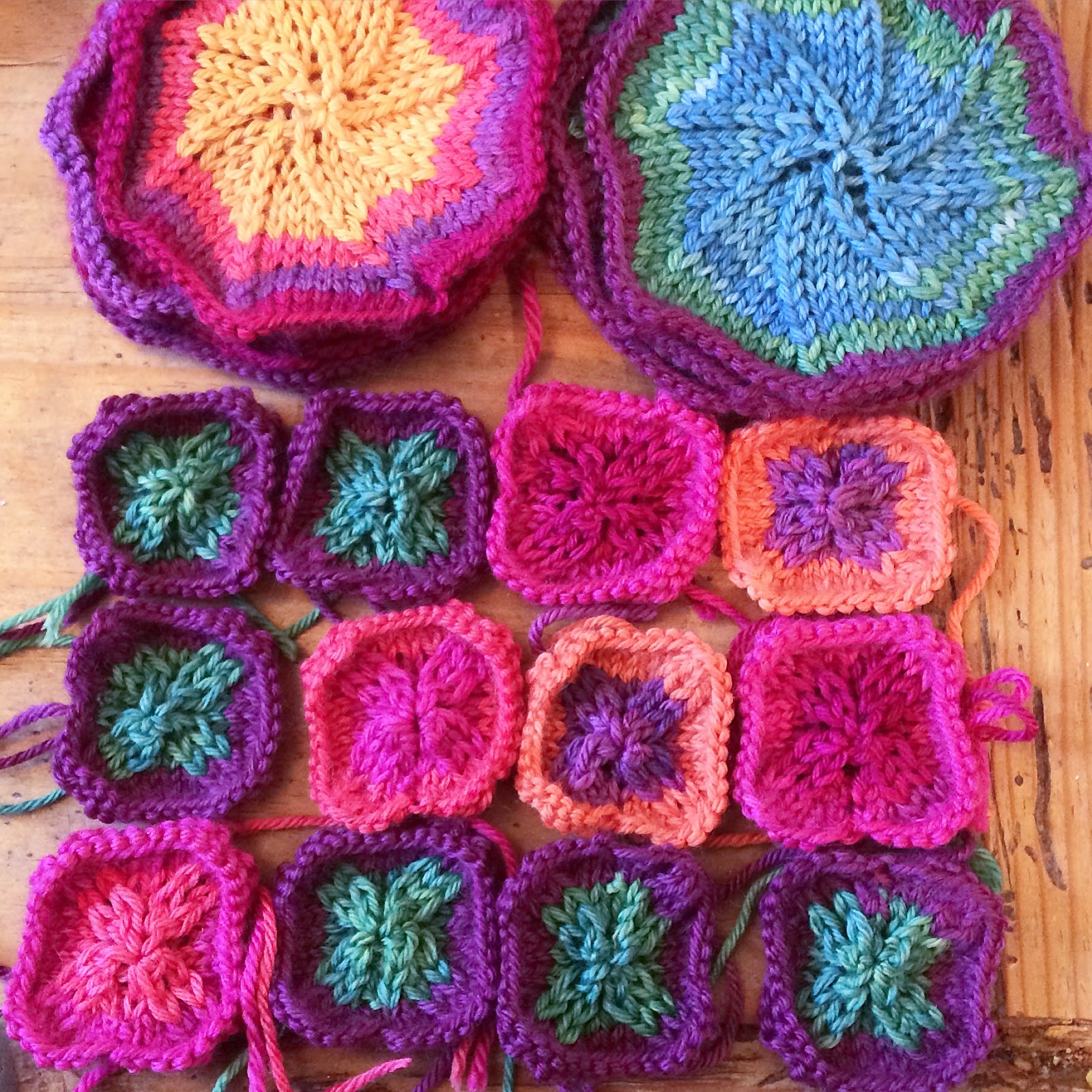 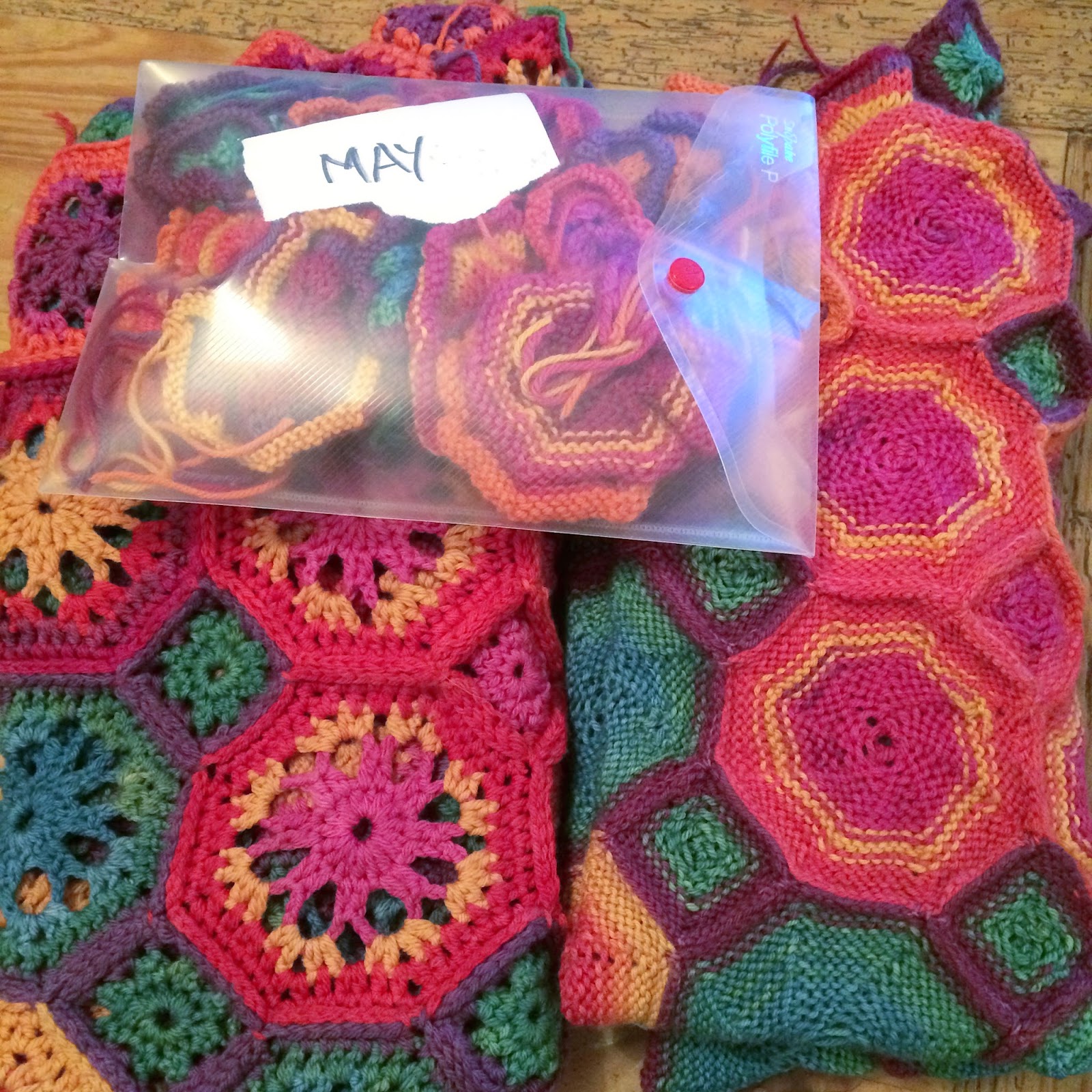 Dyeing, dyeing, dyeing.
I normally only spend the first 3 days of the week at the studio, but we have nearly 200 kgs to dye before the end of NDS and about 4 weeks to go, so its all hands on deck.
Even though I love making colour I am very frustrated about my lack of crochet time. 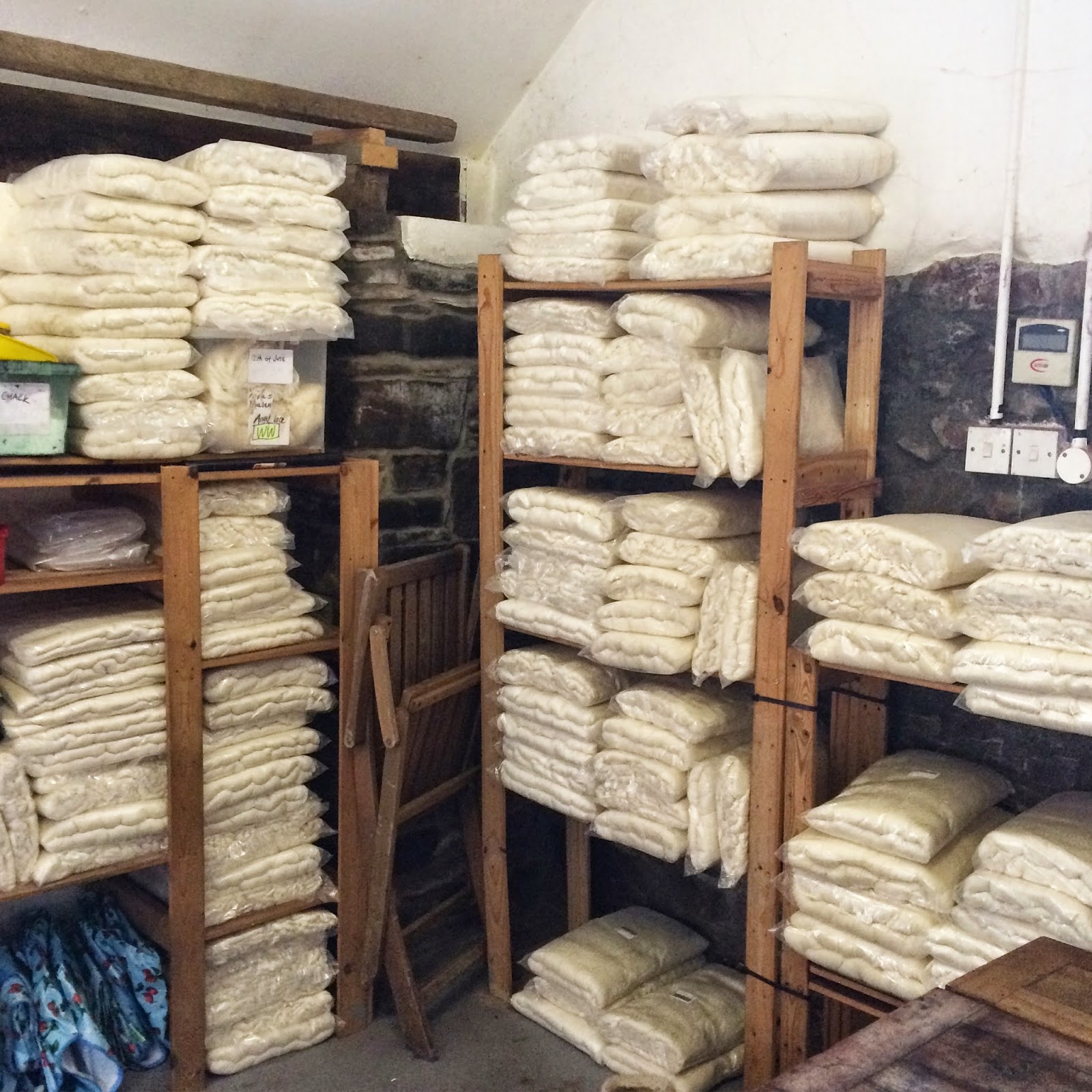 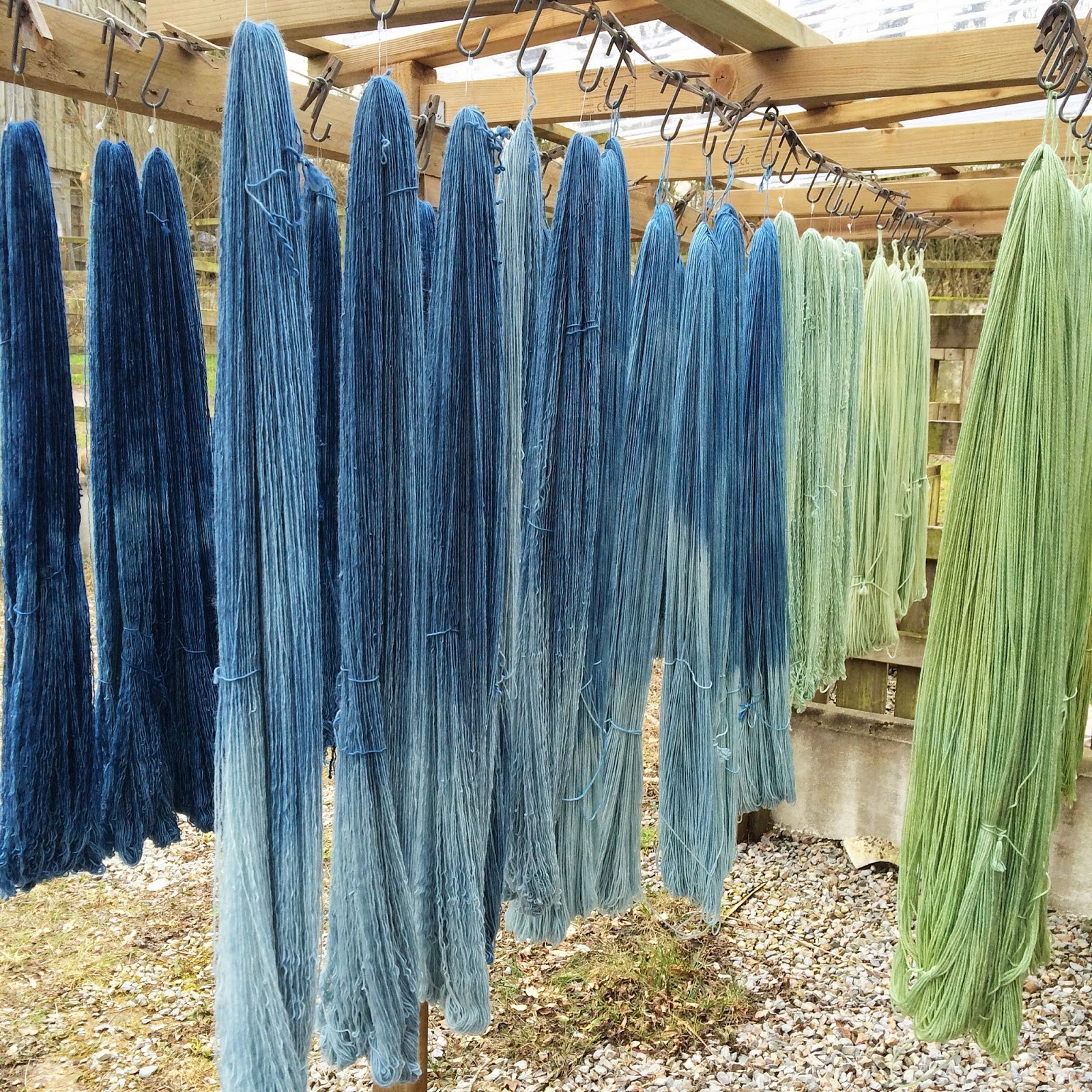 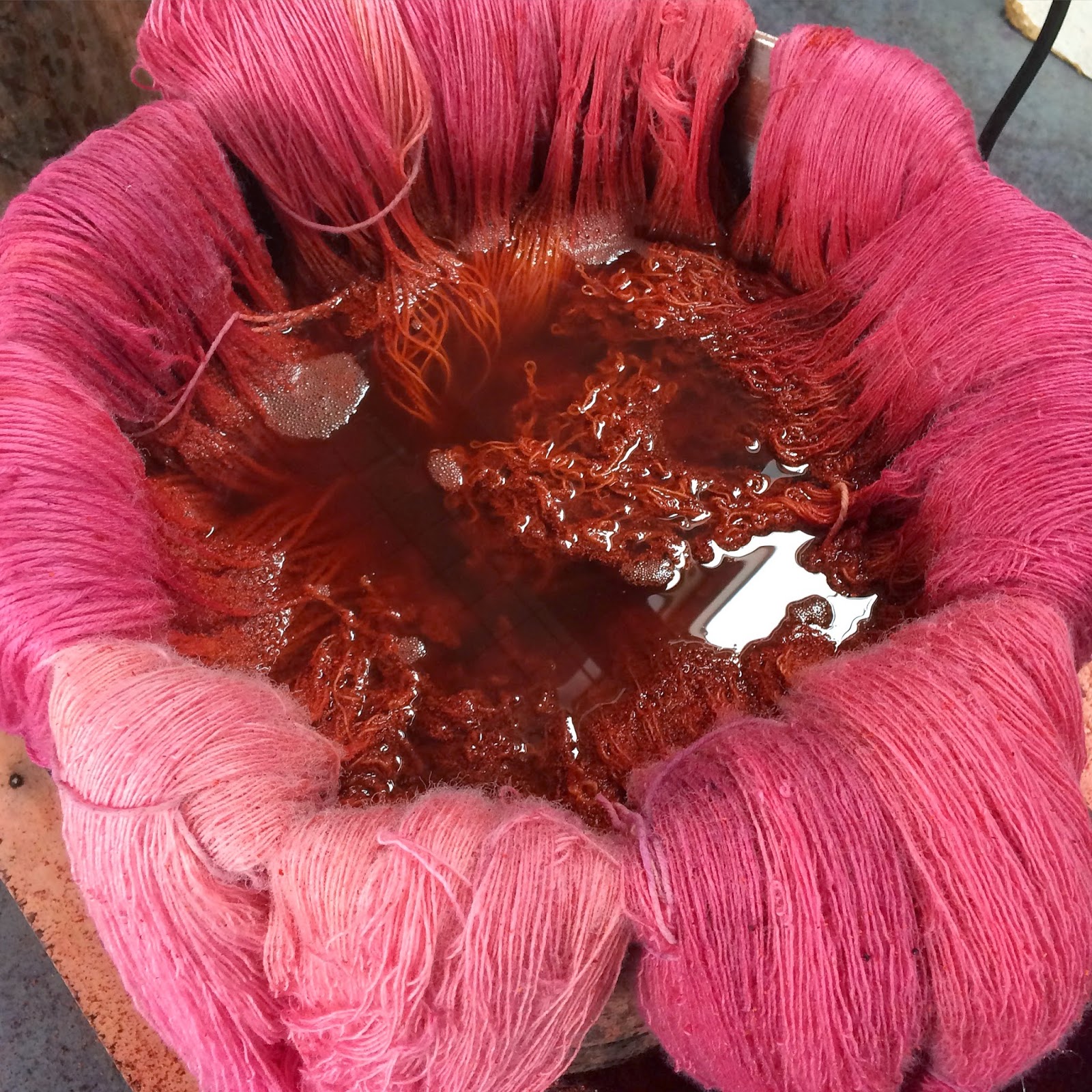 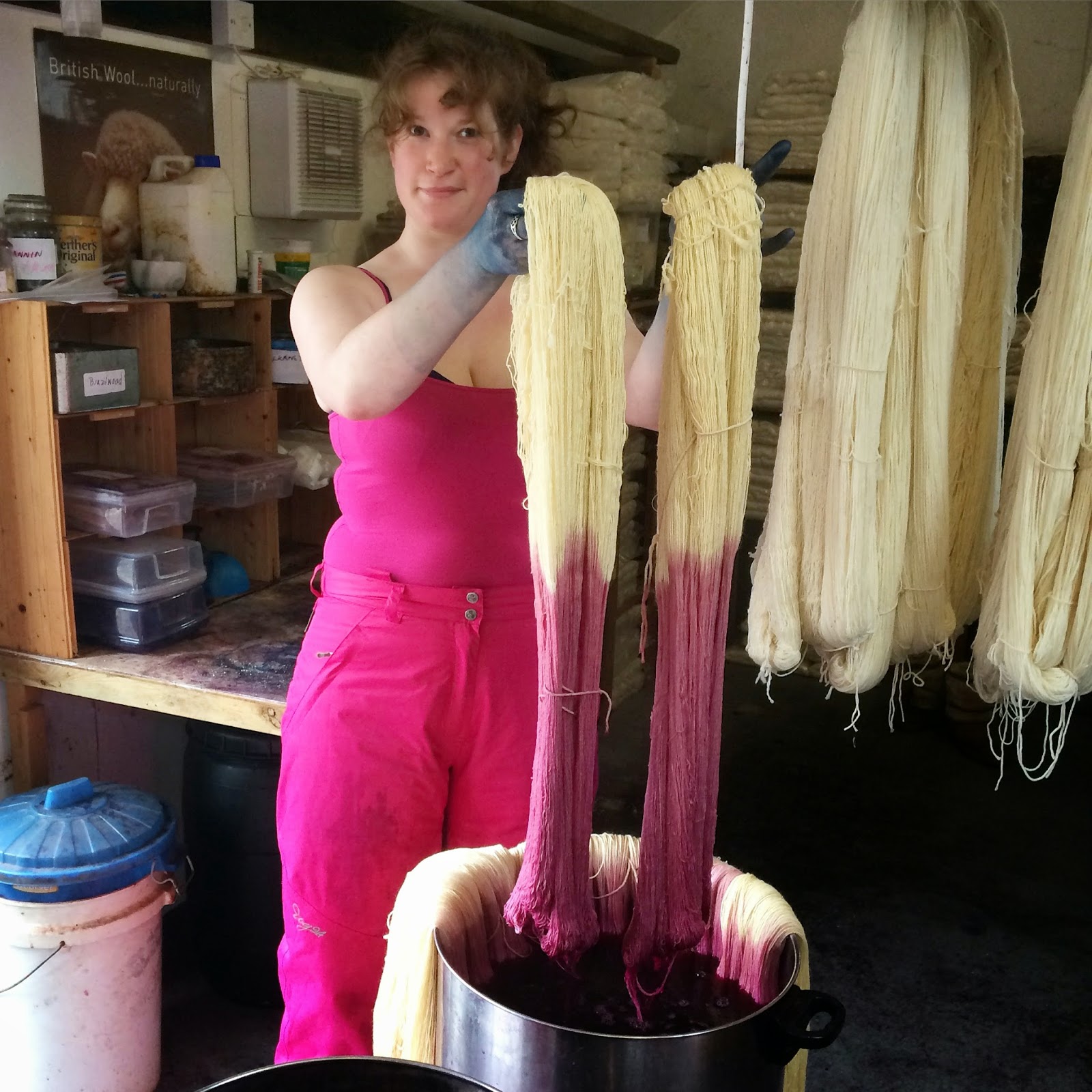 I had 3 whole crochet day's, which was lucky as after 4 day's dyeing I was exhausted and broken.
My crochet plan for the weekend was to produce some swatches to put on the blog to illustrate my new (unwritten) "How to choose colour" page. 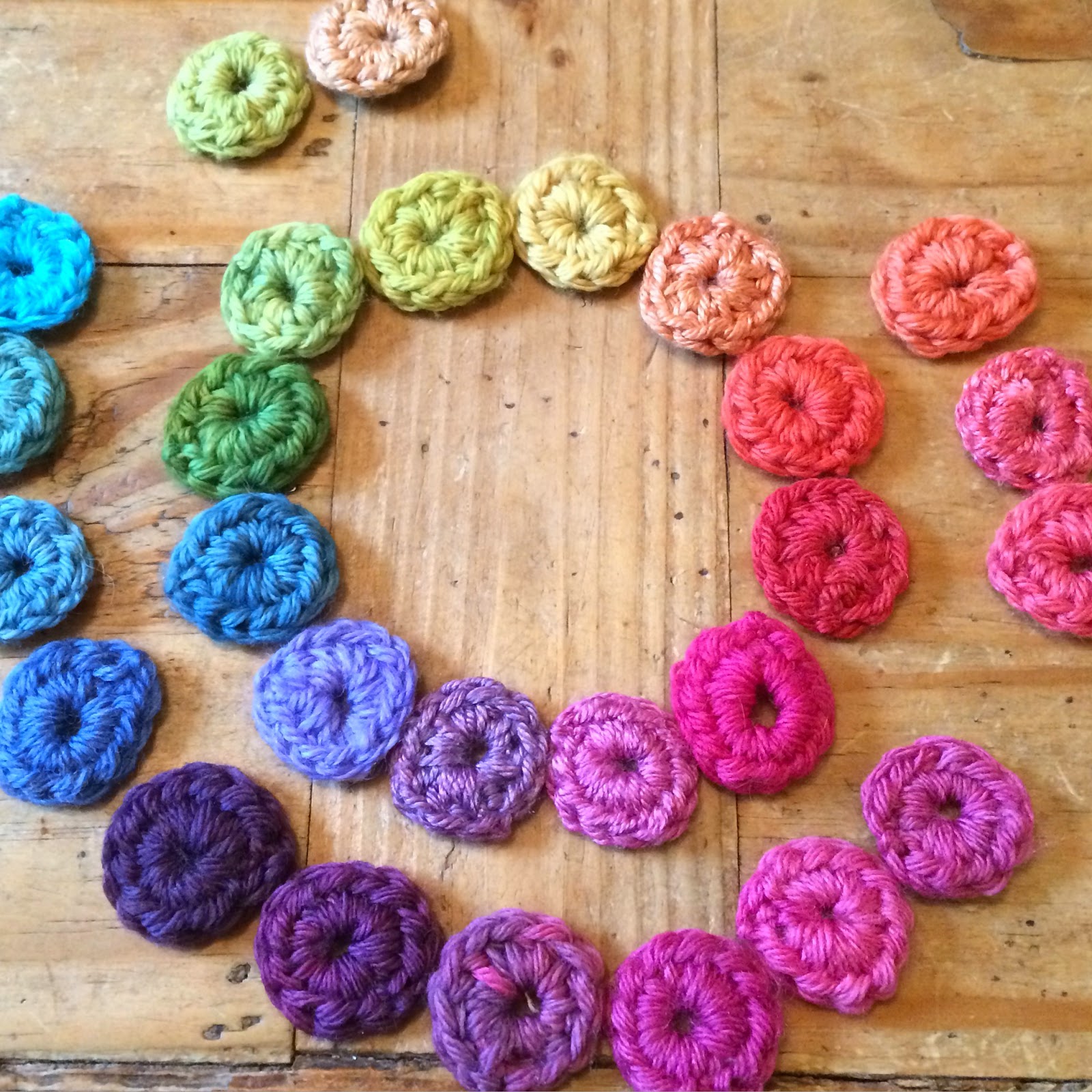 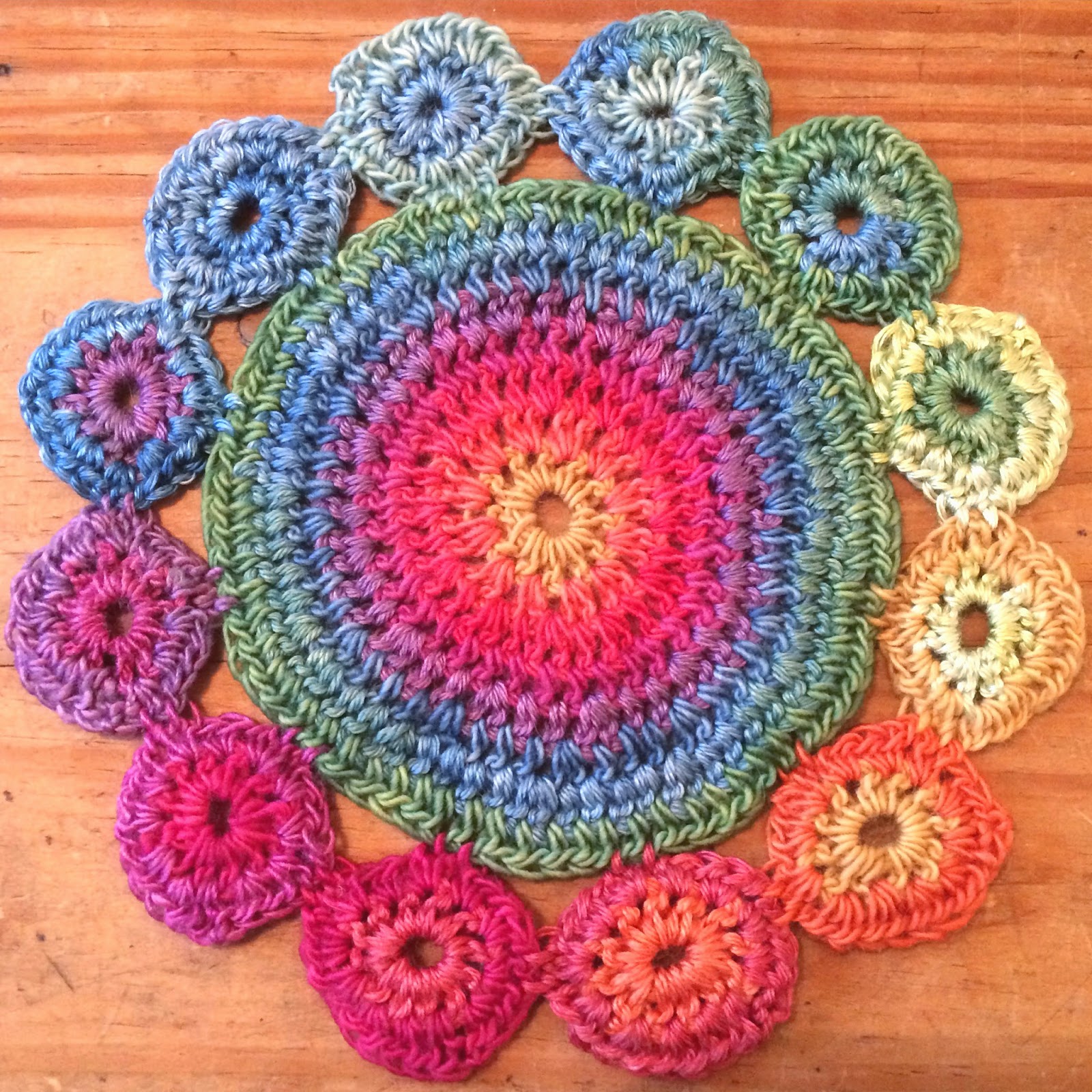 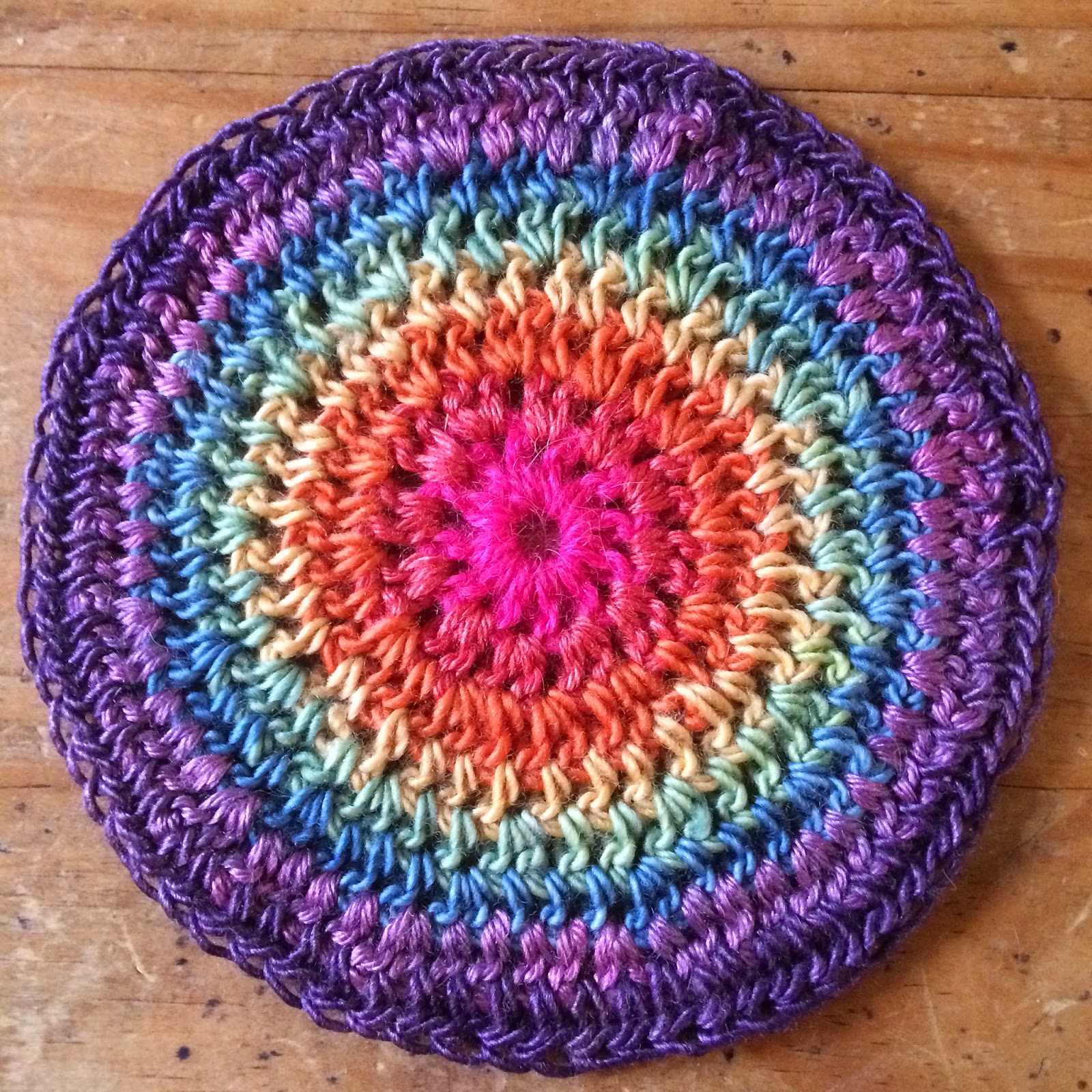 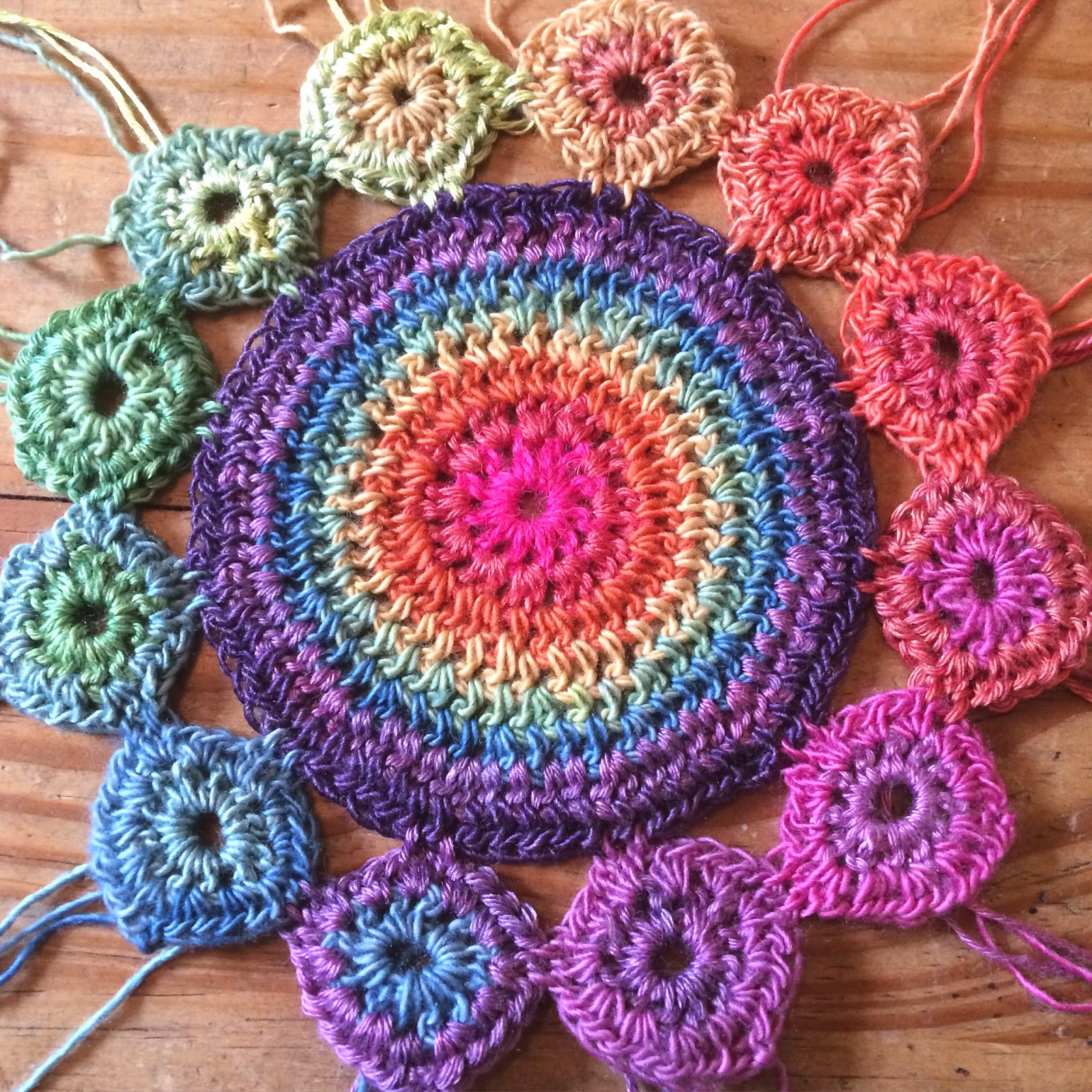 But when I got to this stage of development I realized that there was another Kissing Circles blanket in the pipeline and I hadn't really done what I set out to achieve! 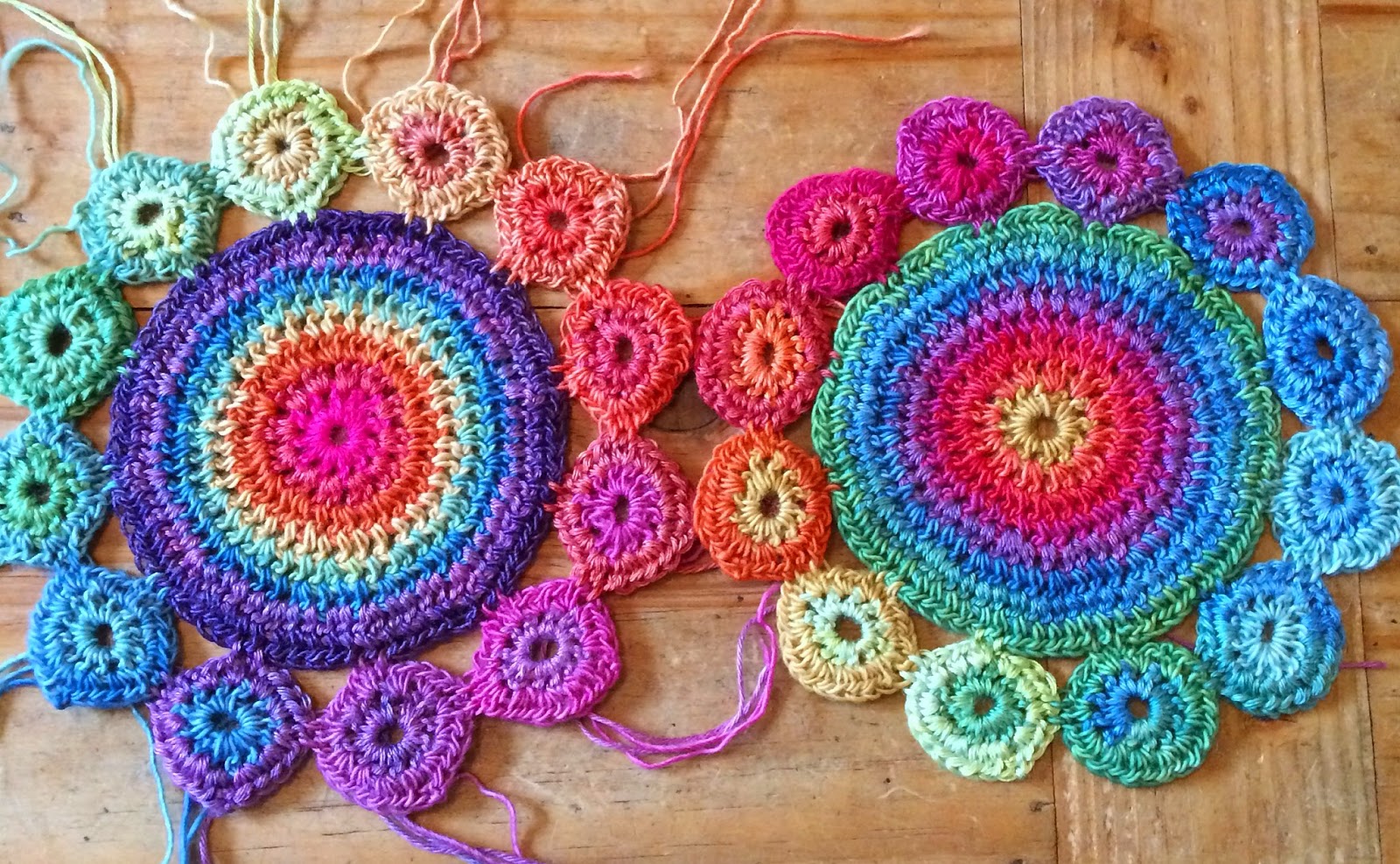 I'd really like to spend some time developing the idea now, but can't afford the time, so have consoled my self with adding another 10 colours to book blanket 8, which is now heading into its 3rd remake.
I'm beginning to panic about my book deadline, I've hardly done any work on it since December, except remake No 8 3 times.
But when NDS is gone I will have 8 months to make 5 blankets and write all the patterns. 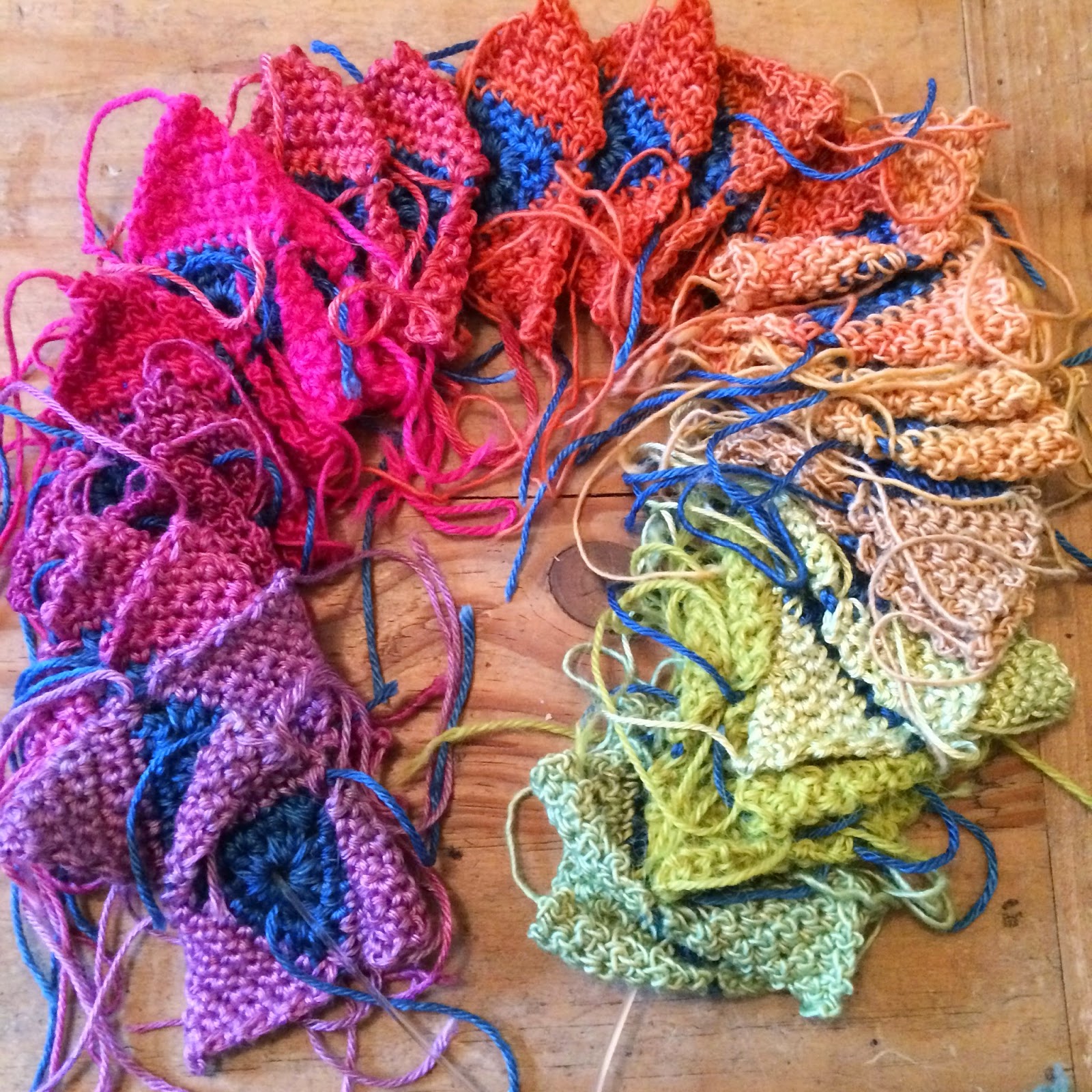 And finally yesterday was Mother's Day.
My darling husband had a huge fail on breakfast, I'm really pleased to be able to share this photo as I'm well known for my inability to cook and he NEVER burns things :-) 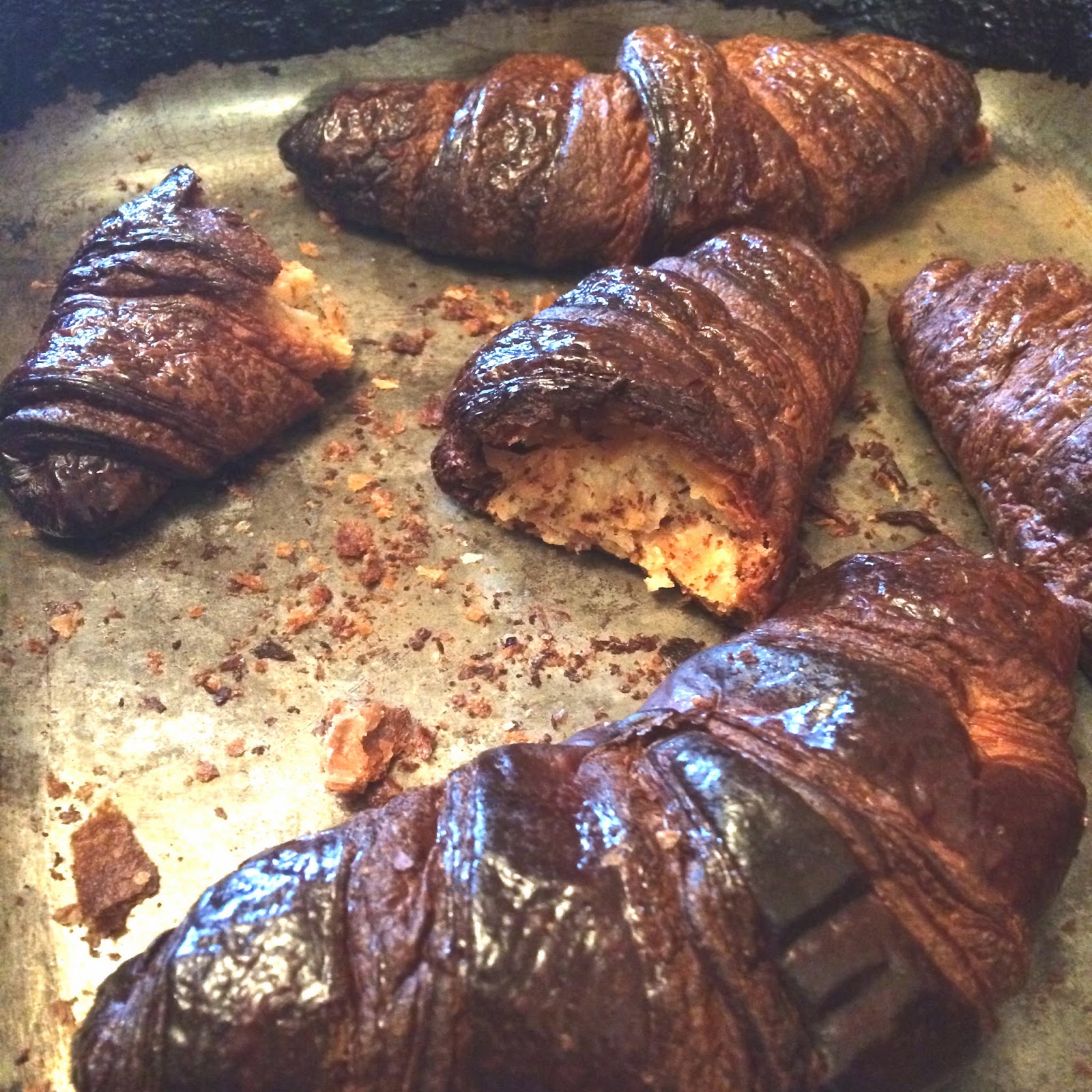 And then Daisy took us/me to lunch at Porlock Weir, which is the most unlike Exmoor place on Exmoor.
From some angles it reminds me of Bawdsey and Felixstowe Ferry, both places in Suffolk that I had known and lived close to in my previous life. 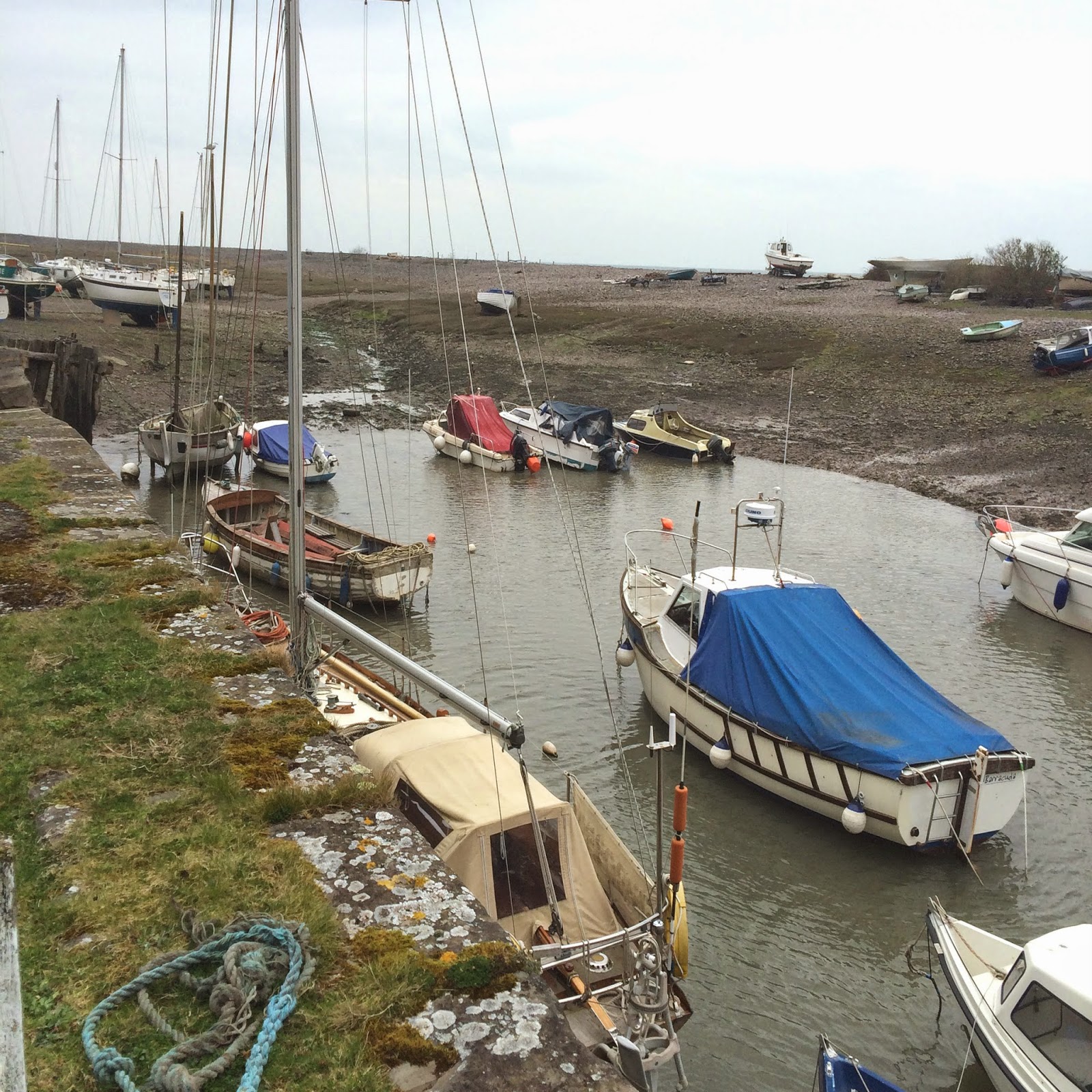 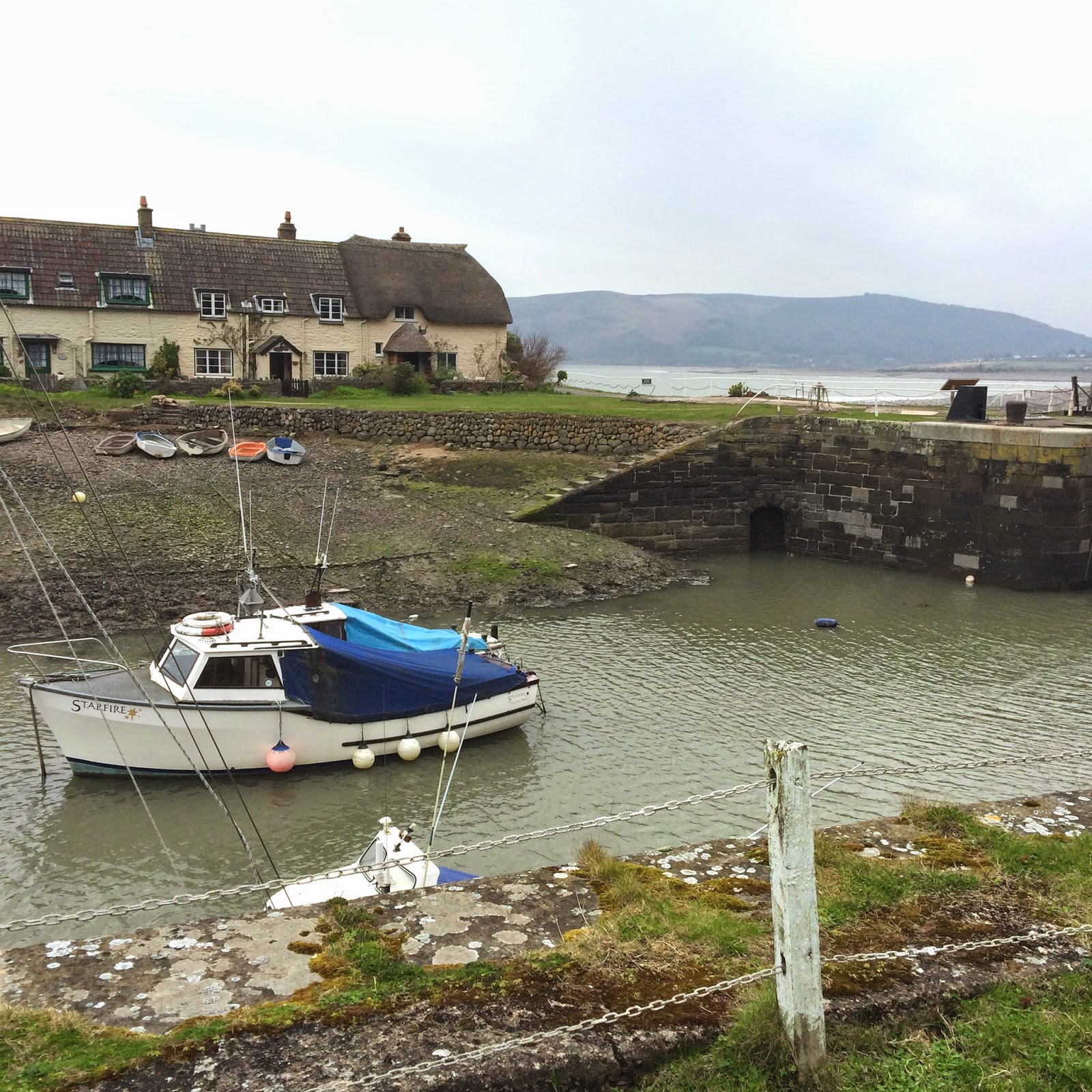 We had lunch at The Cafe, the food was amazing, the best Sunday lunch (except for the home made version) we've had in a long time. And in the evening both of my other children phoned, which made me a very happy mummy :-)