Its a secret design, you won't see it until its finished, which will be December 2014, so you have a long time to wait. Members will see it layer by layer, as new layers will be built each month.

I can show you a couple of early sketches that ended up in the discard pile long ago. 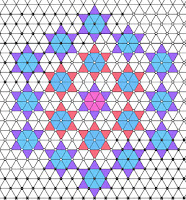 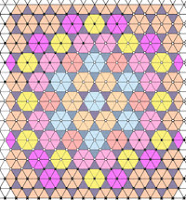 The design has come a very long way since then, these 2 designs look quite sane, the finished design is totally mental :-) Here is a tiny sliver of the actual design, as you can see there are spots and a lot of colours.

Here's a little bit of info to tempt you with, which you can find on the site

"What is a Kaleidoscope? Described by the Ancient Greeks as the 'observation of beautiful forms' the kaleidoscope is a cylinder of mirrors, with colourful loose objects in it, that reflect in the mirrors creating an astounding spectrum of colour in a symmetrical form.
So what is the Kaleidoscope Blanket Club about? This is a club which will run for the whole of 2014, starting in the January and finishing in the December.
At the end of the year you will have a spectacular and unique blanket, with a design based on a pattern created by a kaleidoscope, measuring approximately 60" (150cm) square consisting of 666 motifs. The design will grow from the centre out in the same manner that a kaleidoscope pattern does, utilising one simple triangle motif."

And you can find the rest of the information page HERE

I'm hopeing to get members to post in my Ravelry group DESIRABLE CROCHET MOTIFS, so they can share experiences and wip's.