Long time no see :-)
I haven't abandoned you, its just that I've been unbelievably busy and my brain has been so full of wool that I haven't had any space to construct sentences that didn't start with "Daisy -where's the Precious silk we need another 500 gms of Westerwood for order no 10".

We brought 14 or 15 wholesale orders back from Germany and have had another dozen since we came home.
I always think we can do it all together, but realised after a week we needed a priority system as we needed to dye clubs and stock for Wonderwool. It was a race against time, we managed orders 1 to 10, all 200+ clubs and Wonderwool stock with no time to spare.
Dais and I dyed nearly 200 kgs in 2 weeks both of us looked like zombies, she wrote a whole blog post about our coloured hands - Multicoloured hands 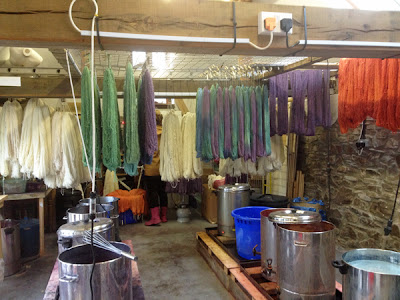 I know you've seen photo's like this before, but I thought I'd show you anyway, you can just see her little pink dyeing wellies hiding at the back in all the wool.
There was a moment when I thought the wool might have eaten her and her wellies were all that was left.

When I cam home at night I was working full time on the crochet triangle club shawl.
I had started it at the end of January as I wanted to be ahead of myself, so I designed a motif and started crocheting, the shawl took 3 different colour skeins of Dazzling 4 ply (there is a lace version too)
After several weeks of crochet I hated it and decided it wasn't working, so that was 130 gms of chewed up, frogged dog ends. I designed a second motif and had to to start with new skeins as I needed to make sure my calculations were right.
I hated that one too, so that was another 300 gms wasted.
I hated the layout and kept changing it, I came to realise I was struggling because I was restricted to 3 colours and I've been using as many colours as I want in my recent work.
So at this point during the first week in March I begged Homer to send the club members a refund as I couldn't do it.
He said "NO" - I had to do it I owed it to my customers, but he promised I didn't have to do another club as I was so stressed, but I had to do this one.
He also said it was ok to do my triangle motif as I am very comfortable with it and maybe it would take some of the stress out of  designing.
So I did!
Its a slight variation and my layout worked.
But the next problem was the calculations which took me days and days and days, not only did I have to calculate the colour layout to make sure I used all 3 colours in equal amounts but I also had to do the same calculations for the lace version which had a different colour layout, due to the fact I could crochet a lot more triangles with a lace yarn.
I finished the shawl in the third week of April, which was good as we were still winding the club yarn.
The shawl looked ok and I was resonably happy, I didn't block it before Wonderwool as the dye room was full of wool and dyeing and I didn't want to accidently splash it with the wrong colour.
But I blocked it this week and I'm so pleased with the result, its worked far better than I imagined, I hope my club members enjoy it.
I'm now working on the lace version, but as a treat for suffering so much stress I am using as many colours as I want.
Both the shawls will be in the new triangle book later on in the year.
I will NEVER do another club that I have to design especially for, but I am planning a blanket club later on in the year, I'm going to make the blanket first and then fit the club around it.

So dear blog I'm sorry to have rambled excuses for so long, I promise to try and to not be such a useless blogger again.