A few weeks ago I announced that NDS was going to run a mystery crochet blanket club in 2013.
I've been so busy with other things that I just haven't had the time to work out a design or how the club would run.
I have been thinking about it, but all my idea's are going to take too long to put into action.
BUT have no fear we have come up with a new idea or rather I came up with a half  baked idea and my lovely tec editor made sense of it and made some very helpful suggestions.

So without further ado I would like to announce we are going to do a crochet triangle project club.
The first 3 months will be a big snuggly scarf
The second 3 months will be a shawl, maybe a lace yarn with a 4 ply alternative for those with a lace phobia.
And the last 6 months will be the blanket.
The blanket will only use a very simple triangle motif, but will have really complex pattern and colour arrangement.

The reason for triangles is my very old triangle blanket design. 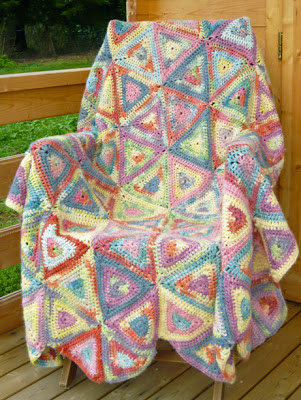 I designed it in the very early days of my designing career, its always been popular, but I hate the colour placing, so I decided that I needed to update it. 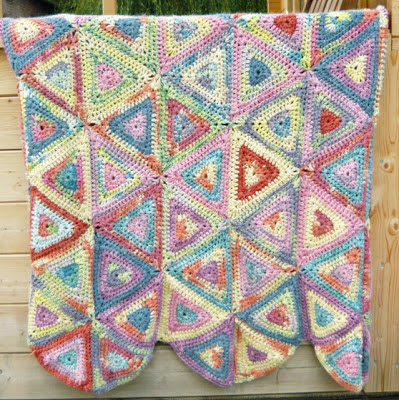 So far I have made one replacement triangles blanket for a magazine which will be published early next year.
And I am now working on a second one, which is a gift for someone who hasn't got a name yet who will also appear early next year - I don't want to say too much as you never know who might be reading ;-)
Both these 2 blankets are 4 ply, so I have decided that the new club blanket will be Dazzle DK, which is what the original was made from.

I'm hoping to put the club on-line in this weeks update, so watch this space.

I'm really looking forward to the new triangles blanket, I've always loved triangles.
And to prove it I've just found this in my old files on my laptop I found this photo, its of a quilted embroidery thing that I made in 2002 when I was a full time grown up textile artist.
I was looking for a much older piece, which was made pre computer day's, maybe I'll find it someday and post the photo when I do. 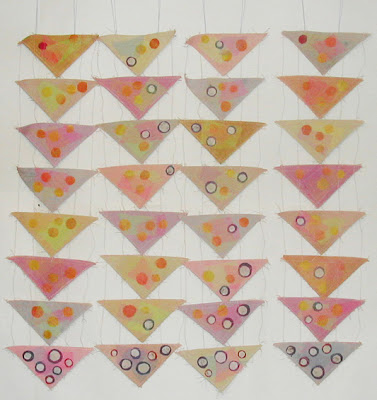