I've been working on a new blanket and developing new way of working.
My lovely crochet friend came to see me about 10 days ago, we spent a whole day chatting crochet. Some of the discussion was about the way I sell my work.
I've slowly come to realise that since the closure of NDS last year I no longer have to keep my blankets to use on the stand to sell yarn and that I should sell them instead.
You can find them HERE on my website.

My friend is the proud new owner of a couple of my blankets and she pointed out that I don't do anything to promote blanket sales and she's right!
My blankets are expensive, but as I pay myself half the minimum wage I think I've priced them more than reasonably.
I understand they are out of most peoples budgets and so I don't expect to sell many.
But during the past week or so I have come up with some idea's on how to make my work more available.
The idea's have evolved during the making of Foxgloves 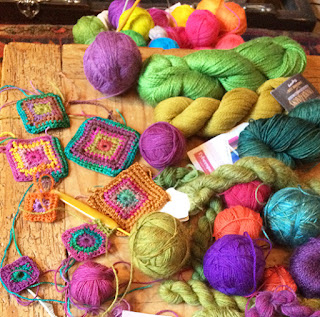 Foxgloves started off as a pile of yarn and my attempt to use a square that didn't contain a circle. However I didn't like the squares, so the circles crept back. At this point in time it was going to be a scarf, with stripes of squares fading into the background green. 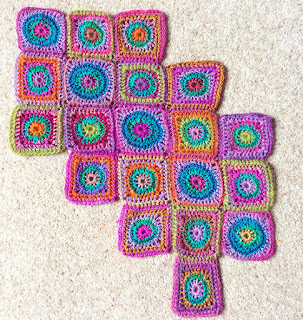 And then it morphed into a blanket and I decided to work the stripes corner to corner instead. 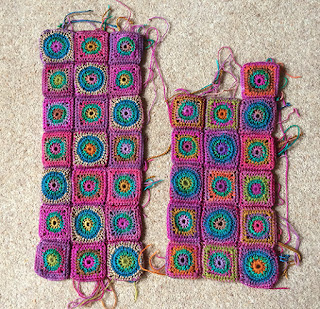 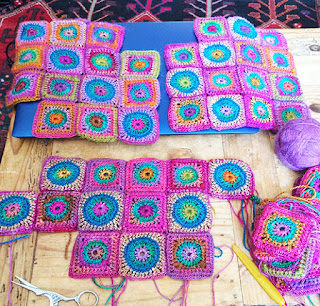 Which left me with a discard pile of swatches. I had a brainwave and decided I could mount or frame and sell the swatches as small pieces of wall art. 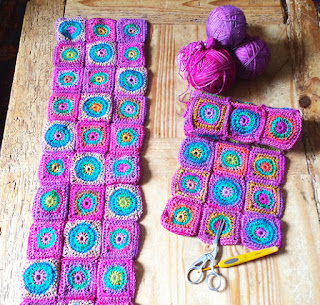 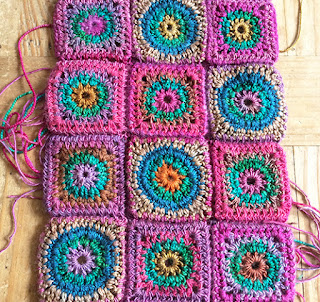 However this morning I've decided to just make the muted version, which means I'm left with a big discard pile of swatches to frame or mount and sell.

I still love the first colour way so I'll photograph it and include it in the pattern.
As I've had so much fun playing with the different colour schemes I've decided that it might be nice for you to have the chance to experiment with your own. So I've decided to include a couple of colouring sheets for you to play with. 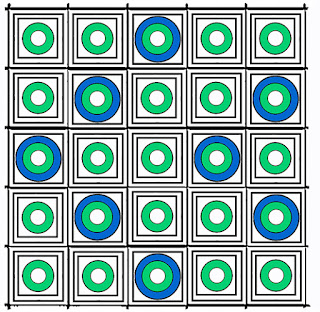 I've coloured in bits of the layout so you can see the structure, if you use the same yarn you have a starting place to work out your colour scheme around.
Obviously I need to do some development of the colouring pages, so its a work in progress, but the photo above gives you an idea of what I mean.

If you can't wait for the pattern and want to start collecting colours, you will need to buy 1 skein of  Fyberspates - Vivacious 4 ply Sea Green (the green circles)
And 1 skein of  Fyberspates - Scrumptious 4 Ply - Teal (blue circles)
I've also used 1 skein of Fyberspates - Vivacious 4 ply - Mixed Magentas as a background colour, so if you want to do the same colour way as the original you will need to use it as a core colour to base your collection around.
You can find the list of Fyberspates stockists HERE
You can use any 4 ply yarn, just as long as its a similar metreage (360 - 400 metre's per 100 gs)
My sample blanket includes some Skein Queen, Easy Knits, The Little Grey Sheep and John Arbon Exmoor Sock.

Love Amanda - off to colour in some charts :-)