Last weekend we took The Natural Dye Studio to Unravel for our very last NDS show.
Daisy and I had been so busy in the run up to the show, that we didn't really have much time to think about what it really meant.
I think its best that I tell the story with photo's, because otherwise this blog would end up as a soggy tear stained mess. 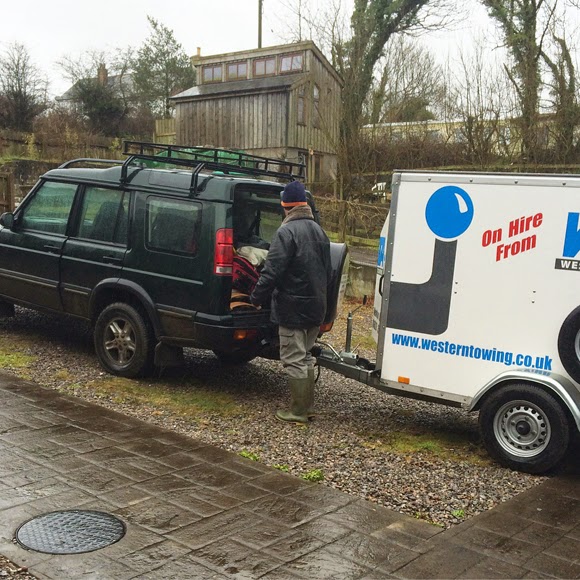 This time the Beast worked, we hired a box trailer, which was a million times better than the flat bed we took to Yarndale.
BUT the 8ft trailer had already been hired so I had to book the 7 ft trailer, it was very touch and go due to the fact that our metal show grids are 7 ft.
The trailer dimensions were 1/2 an inch bigger than the grids, luckily the trailer had a pointy bit at the front with a metal bar across to support the structure. We packed out the floor with yarn bags and rested the grids on top of the bar and wool, it was all tied together with lots of rope to stop the grids moving and we managed to get to Farnham without any problems. 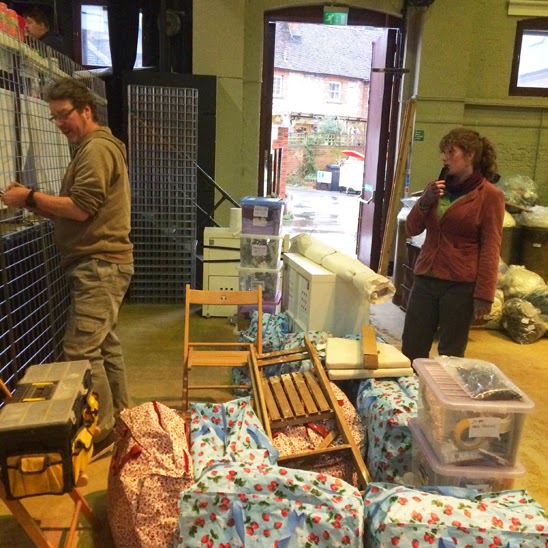 Set up was easy, which makes a change, we normally have kits and assorted scarves and dummies, but this time the only thing we had was wool, it felt like we were missing vital stand ingredients, but the wool was the big focus so it was ok. 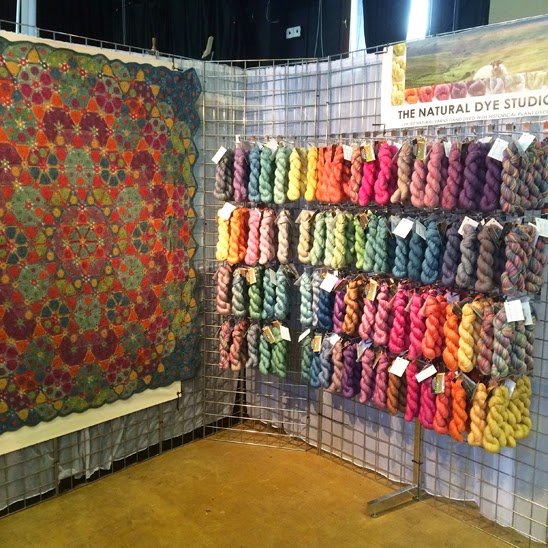 And the stand looked amazing, I was really happy with it, the lighting made the blankets glow and it was warm and inviting. As you can see we had 2 sections of wool, one either side of the stand, so customers had more space to browse. 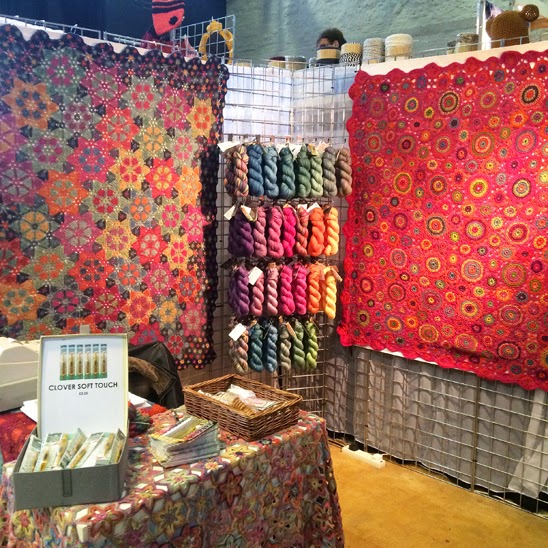 What I didn't expect was the response from customers, it was overwhelming, we had a constant flow of feed back to my "End of NDS" blog post, so many people came to tell me I was doing the right thing.
We talked to so many customers with so many stories and so many fond NDS memories, that
its impossible to even start to tell them here.
And so many projects that people brought to the stand to show us and share.
We were given cards, letters and bottles of wine, cake and chocolates.
The out pouring of emotion was very humbling and really brought home to us that we weren't just selling a bit of wool, we were selling happiness and creativity to yarn addicts :-) 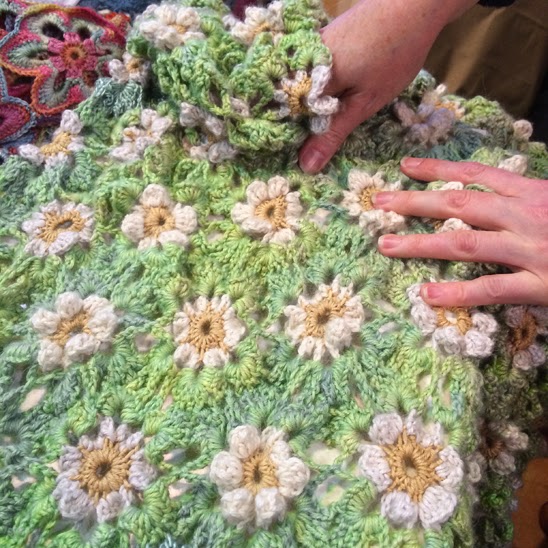 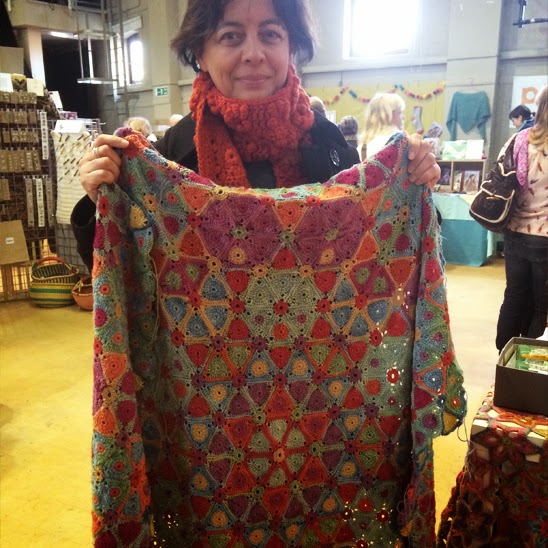 And Isabelle brought her Kaleidoscope, which was fantastic to see along side with mine on the wall. 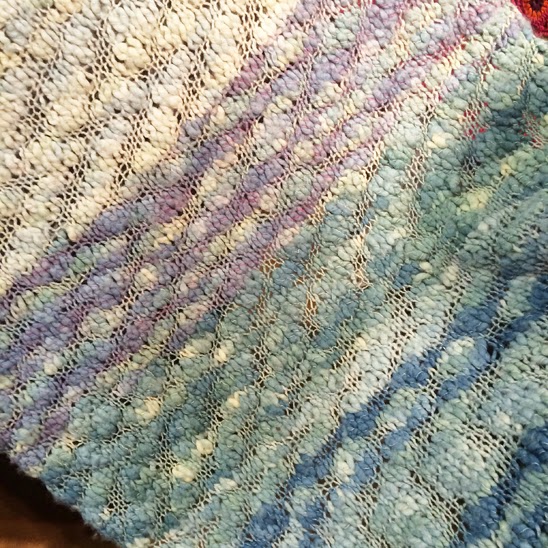 And this chunky slub blanket was made with yarn we sold at least 8 or 9 years ago on eBay.
I loved this yarn, unfortunately you didn't, so we stopped dyeing it.
Its still soft and cuddly and the colours are still beautiful....sigh..... 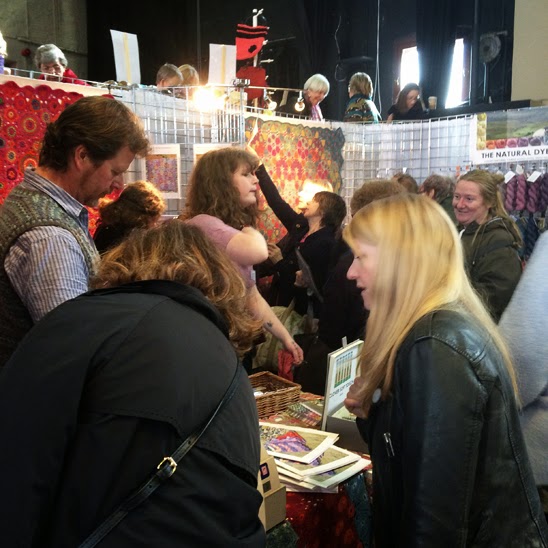 The stand was constantly busy, half the time I had to stand outside in the aisle and chat to customers. 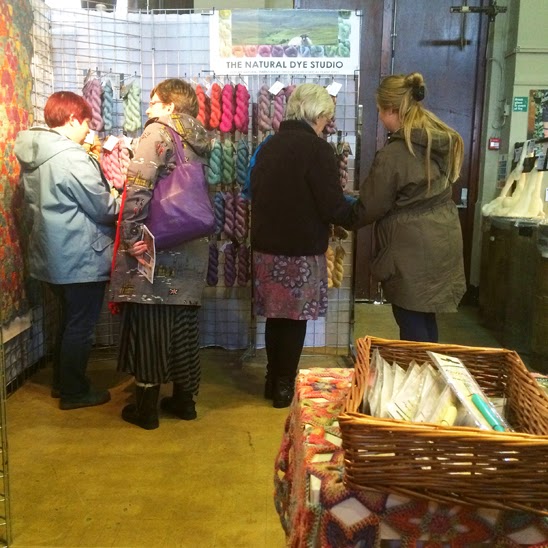 Even when it was quiet the wall of wool still had adoring NDS fans in front of it trying to choose their last skeins. 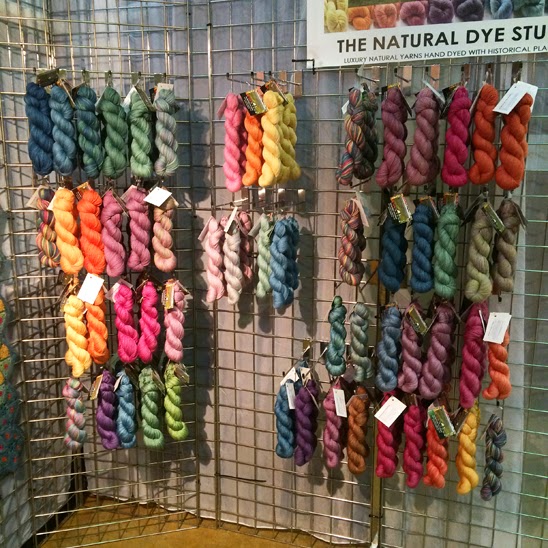 And then the show was over, this was all we had left to take home, over 40 kgs less than we took with us. If you look closely at this photo you can see that a lot of the remaining pegs only have 1 or 2 skeins on, when we set up there were 5 on each. 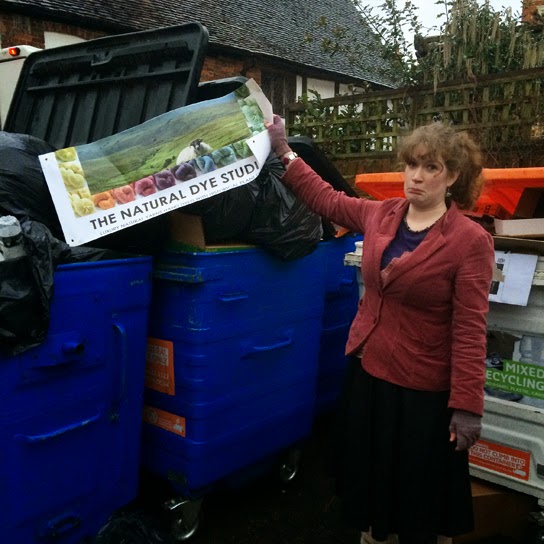 Breakdown was fast and furious, after all we didn't have much to pack as the lovely John Arbon took our grids home in his 8 ft trailer.

And then we had a ceremonial throwing away of the stand sign, we had already had to cut a piece off just to fit it in over the yarn, but this seemed like a fitting end to NDS's show career.
This was also the point that Dais and I looked at each other and almost broke down, luckily we both realised what was happening and started talking about jam or some such other nonsense.
If we hadn't I think we would still have been sobbing over each other in a wet car park in Surrey 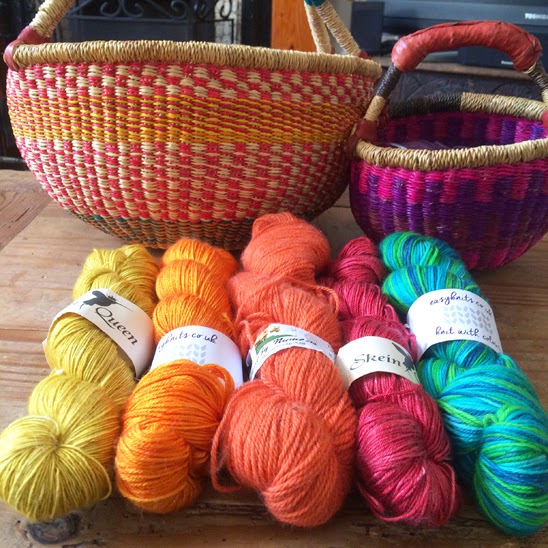 And now onto new things and the first yarn for my brand new stash.
I have never bought yarn before, so it was a whole new learning curve, I couldn't have it all I had to choose a couple of skeins at a time. I didn't realise how difficult it was being a customer!!

So here is my Unravel haul...

2 x baskets from Injabulo - I always try to treat myself to one of their baskets at the shows, they are guilt free shopping as by buying them I am buying Fair Trade and helping support families in Africa who don't have all the luxuries in life that I have and take for granted.
So you can see it is my duty to buy their baskets, which are perfect for keeping stash and projects in, my wool room is full of them and as I buy new stash I will have to buy more new baskets.....

2 x Easyknits skeins - Although I've always loved the intensity of colour of Jon's yarn I've always thought I needed sunglasses to look at it, but I hope when its mixed in with softer more subtle colours it will look like little electric flashes of colour and give my blankets a new dimension.
Obviously I need to buy a lot more and a bigger range of colours to test my theory.

2 x Skein Queen skeins - Which I have coveted for a long time as Debbie's colours will blend perfectly with my NDS stash and give me a much bigger colour palette.

It felt a bit odd buying from my long time competitors, but they are both valued friends and people I love and respect. I know just how difficult it is to be a indie dyer, and so I want to support them.

I have a list of dyer friends that I want to add to my stash, but they weren't at Unravel so I'll have to wait until Yarndale.

And finally 1 x skein of John Arbon's Knit by Number's
I only have one skein from Unravel, but as John is a very close friend and neighbour and I know where he lives, where his mill is and where his shop is I don't think I need worry about adding to my stash.
John has cleverly created Knit by Number's especially for me without even realising it.
It has the almost the whole rainbow and new colours to fill the gaps are in the pipeline.
Plus there are rumours of a 4 ply Knit by Number's.............