Zodiac & the next tick

Its a very momentous day today, Daisy and I can tick a massive tick off our to-do list.

We will be posting all the yarn and first pattern instalment for the 2 Zodiac blanket clubs.

The Zodiac is the culmination of 10 months work, I started designing it last April, it took 2 months to come up with a workable design, we put the memberships on-line last June.
I had a few months off from the Zodiac, working on the book and the summer wool shows.
Our plan was to start dyeing the yarn after Yarndale, but due to our workload we just never managed to fit it into the dyeing schedule.

I did however start working on the pattern.
The pattern has taken months to write as I needed to turn a very complex design into a pattern that was understandable and easy to make, luckily I have Valerie, who has been with me through the whole process, tecing all my charts and written instructions, re-working all my maths, writing the motif patterns for the knitted blanket and just generally being an all round superstar.
Without her the Zodiac wouldn't exist
I have my fingers crossed that we've managed to produce a workable pattern.

So Daisy and I started dyeing at the beginning of the month, actually I should say Daisy started dyeing I was still working on the pattern.
The dyes have been playing up and its been a nightmare trying to get the colours right.
Due to the cold weather some days the indigo has refused to play, Dais dyed all the green and after she'd washed it it was far too pale, so I re-dyed some of it and quite a bit of the re-dyed green ended up far too dark, so there is a huge variation in the greens, so there is going to be a huge variation in the look of the finished blankets.
I've been really panicking about the green, but have come to accept that its out of my control, there is nothing I can do about it,
We can't afford to buy and re-dye another 15+ kilo's of green and it needs to be posted now and not sometime in February, so some of the members will get a dark teal, some will get a slightly muddy apple colour and maybe one or two will get the colour I'd planned to dye.
Now I've had time to think about the varying greens, I've decided that it will be quite exciting watching the different colour variation blankets emerge.

We finished the dyeing at the end of last week and have been struggling to get it dry, rewound, labelled and packed in time to send it before the end of this week.
I finished sorting all the yarn into colour packs yesterday and Dais is packing them into their mailing packages today. 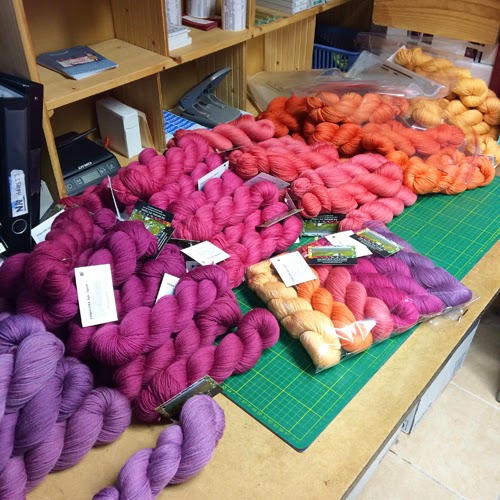 I'm at home working on the blanket today, but I'll be taking a trip up the hill later this afternoon to fill the Beast with the Zodiac and bring it back down to the post office to catch the last post.

Next thing on my to-do list is crochet the actual blanket and listen to Phil complain while he makes the knitted one.
He's only ever made finished patterns and never been a pattern tester.
So he didn't completely understand what he was agreeing to when he said he'd make the knitted blanket and he's finding it very frustrating that I keep editing the pattern and taking away the charts he is working from and replacing them with newly edited charts.
Unfortunately he's not going to be happy tonight when he discover's that I have had to edit the main pattern as I had a couple of the colours muddled up.
He thinks he's finished knitting the February motif's, sadly he's going to have to re-knit 2 of them :-)

If you are a member don't worry about the pattern edit, I'll send a e-mail tomorrow with the new colour charts attached.