After all the show chaos and meeting all my immediate deadlines I finally have time to design what I feel like.
I do have the Kaleidoscope club blanket to make, which does have a deadline, but as I've already finished January there is no urgent rush.

So I have been playing with some idea's and come up with a new blanket design - "Twinkle, Twinkle, Little Star"
Its not symmetrical which is a huge challenge for me, my brain works symmetrically so I have to force myself to not try and rearrange the design.
Its also a mix of colour, rather than blending the colours I am using whatever comes out of my wool basket.
Over the past few months I have begun to realise that you like mixed colours rather than blended colours.
My Lily blanket and Lula scarf are still best sellers and sell more than my newer more organised designs.
I love colour mixes as well as blends, so I don't mind designing some new ones.

Twinkle, Twinkle is the result, made with Godiva HT which is soft and snuggly - one of my favourite blanket yarns.
I thought it might be a nice idea to publish the pattern before Christmas so we could produce starter kits to put on the site so you could buy them as gifts.
It started off like this a couple of weeks ago. I tend to make a swatch then block it to make sure the design is working and at this stage I was happy.
The colours and focus aren't quite right in the following photo's, some were taken with my phone and others were taken inside, so they are all a bit off. I normally photograph all my designs outside as the natural dye colours look their best in nature :-)
The colours of the wool at the bottom of the page are the correct ones and colours I am using in the blanket. 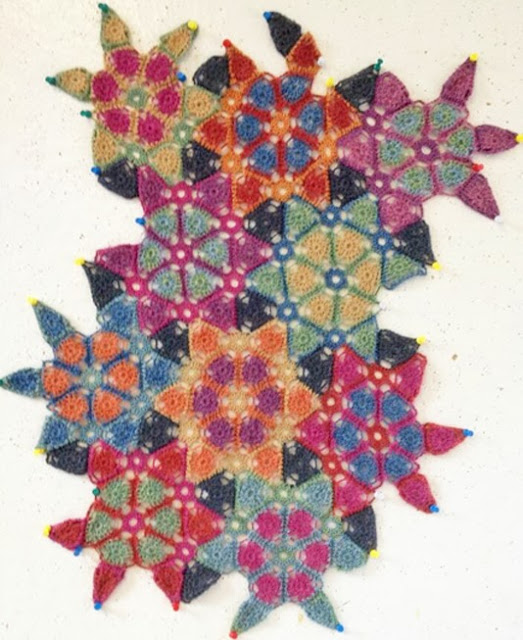 Then I did a bit more, even though I still liked it I decided that the dark background was wrong, it stood out and made the central colour blur, so I changed it, which was/is not an easy job!
To start with I couldn't come up with a background I liked, most of them took too much emphasis off the stars, I really liked a mosaic of blues, aquas and greens, but all the blue stars disappeared into the background.
Eventually I came up with all the little circles.
The photo below shows the existing dark background and the circles I was experimenting with. 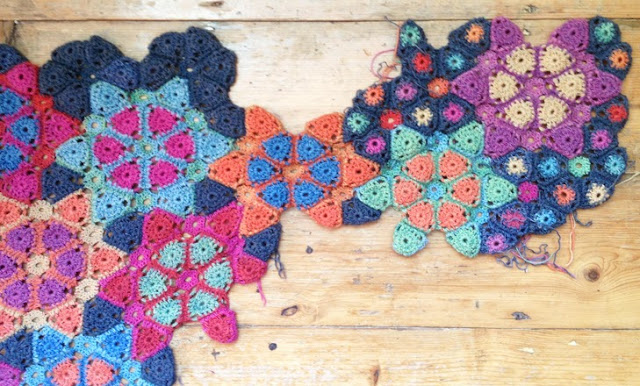 Like a good crochet motif maker I had sewn in almost all my ends, so for the past 10 days I have been cutting out all the solid dark blue/motifs and replacing them.
Considering I'd almost finished 2 sides of background its taken me ages, a lot longer to cut and frog than it took me originally to crochet and sew in the ends.

This was how it looked yesterday afternoon when I came home from work.
Its progressed a bit further as I worked on it last night, I've almost finished replacing the dark background motifs and am back to the place where I started cutting and frogging.
If you look closely you can see all the ends I haven't sewn in, I want to make sure its right before I commit myself and have to cut and frog all over again! 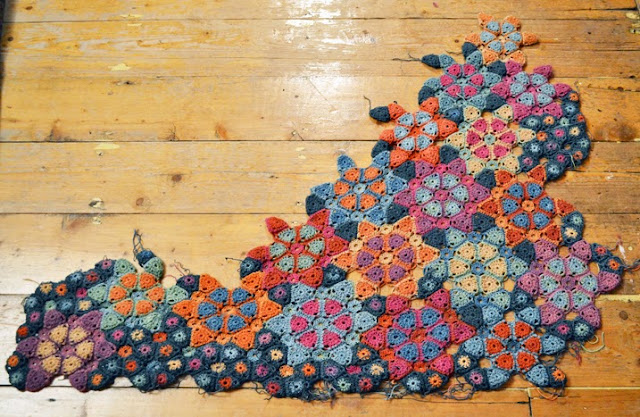 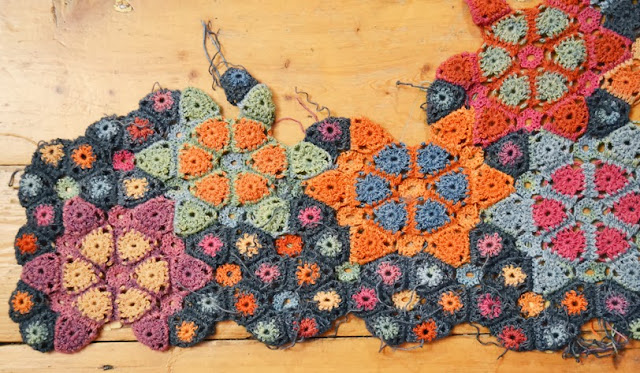 The photo below was taken with the flash and has bleached the colours, but it does show what the blanket looks like when it is the right way around, so I've included it. This weeks NDS yarn update contains an awful lot of Godiva HT, including mini Skeins and colour collections. Twinkle, Twinkle uses all our rainbow colours, so if you want to make it now is the time to start collecting skeins. The update will be live tomorrow (31st of October 2013) at 7 pm and you will be able to find it HERE