A sort of love letter to Mr NDS 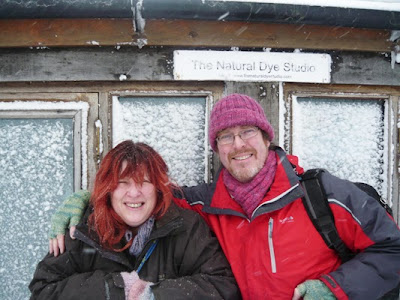 I've just read a comment from someone on NDS's Facebook group saying "you are so awesome".
I'm not really, but I know someone who is - Mr NDS.

I don't talk about him very often, but I should do.
He is the reason NDS has grown into a successful business.

Once upon a time he had a proper job and career.
When I first met him he was a clerk in a shipping company with no particular direction, within 17 months of meeting me he had a wife, baby and mortgage.
He had also discovered his ambition and after 25+ years he had worked his way up the corporate  ladder to become a director of a logistics company.
His career always came first, it fed, clothed and housed me and our 3 children, but according to the company I was just his nameless, faceless little wife. It was ok, because it gave me the time to follow my artistic career and play with wool.
Then about 3 or 4 years ago (I can't remember how long, so much has happened since then) his world fell apart.
The recession killed his company and his ambition, he was angry and heartbroken.
He decided to leave the corporate life and join me in my little wool dyeing business.

It was very hard work, we lost our house, all the trappings of sucess and lived through some nightmare situations.
But we re-discovered happiness and he rediscovered aimbition.
He took over the business side of NDS and pushed it to the limits and is still pushing.
This left me time to develop the creative side of NDS and return to my career as an artist, although now it was re-named designer.

When we moved to Exmoor he cut all his ties to his other life, he didn't do it on purpose, it just happened.
But he discovered peace and a new lease of life with new mates doing boy's things -  fishing, kayaking, walking, allotmenting, pool, football etc etc
And we are happier and more content than we have been for decades.

One of his life challenges is to look after me, I didn't ask him to do it and never expected it, but he has taken it on with gusto.
He does everything, because he likes to think I am incapable of looking after myself.
He cooks, cleans, does the washing, walks the dogs, drives me everywhere, wakes me up every morning with a cup of tea etc etc
I know he panics when I am left on my own to do things, but occasionally I have to, just so I don't forget how to do it.
Only last week Dais and I had a stand at the North Devon show, which was an hour's drive away. He was obviously struggling with the fact that he had to let go for a day and offered to drive us in the van.
But we refused politely and really enjoyed our day, I have to say it felt a bit like being Thelma and Louise, me and Dais in the big bouncy van going places on the open road - only if it was just to Umberleigh and back.

You might be excused in thinking that I am being smothered, but I'm not.
I have the time to indulge my passion and my obsessive artistic side. I dye wool, I look after the website, I do social networking and I get to crochet and design every waking hour of my day.
This year's book is nearly finished and I am already designing next year's blankets in my head.

I wouldn't have the time or space to do this with out Mr NDS.

I love you Phil, Thank you for letting me live my dream.
xxxxxxxxxx