The snow has gone and the temperature has gone back up, the birds are singing and the sun is shining and its very peaceful here on Sunday morning.

I thought I would share what I have been doing for the last few days.
We were snowed out of the studio for several days last week, so we have been working at home.
I decided it was about time I started on the next motif book, so I have been gathering motif patterns together and sorting through swatches and photographs.
It doesn't sound like a lot, but it takes ages, each photo needs editing and charts need to be re-checked.
Today is day 3 of photo editing, so I'm having a break for a while and writing this post.
My evenings are spent crocheting and I have a lot of swatches to make for the book, but I'm really struggling to make them, all I want to do is make orange triangles.

So far I've made 2 blankets and 1 scarf and have just started work on a second scarf.
You have already seen the first blanket - Lecchi
And sneaky peaks of the second blanket which is still secret.
The first scarf is going to be published in a magazine, but I do have a photo to share.
Its a pile of ends, I like sewing in ends, if you do it at the end or beginning of every time you sit down to crochet it becomes easy and a lot less stressful.
But sometimes I don't want to stop crocheting so end up with a huge amount to sew in, thats why I have this pile of ends. 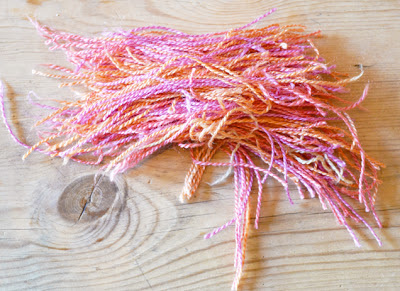 For the last couple of night I should of been swatching motifs, but did this instead - its the second scarf.
Can you see the orange triangles??
Its made with Dazzling lace and so this swatch is quite small, I'm hoping the orange triangles will disappear into the background as it grows. 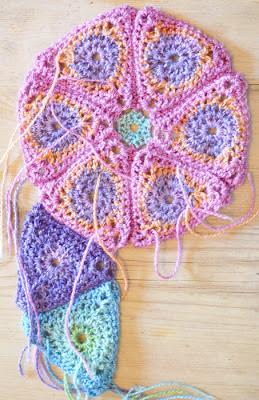 This scarf won't be secret so I can post photo's as I make it, but you won't be able to buy the pattern until I publish the book :-))