I am often asked how I design my blankets, so I thought I'd share a photo diary of my process.
I don't start out with a drawing, my inspiration comes from many varied sources, quite a few memories, the yarn and colour I use, the place I live and lots of experimentation.

I like to develop an idea and make several variations of the same design, I have been unable to do this while designing for NDS as our yarn customers want something new and exciting rather than the same old thing again and again.
But now I am about to become a full time designer/artist I can indulge myself and have promised myself I will create exactly what I want to create rather than create something that has deadlines and guidelines

The following photo's are of the development of my Kissing Circles blankets both past and present.

The very beginnings of my Kissing Circles started in 2008 when I designed my Circles blanket
It was a 3 round circle within a square. 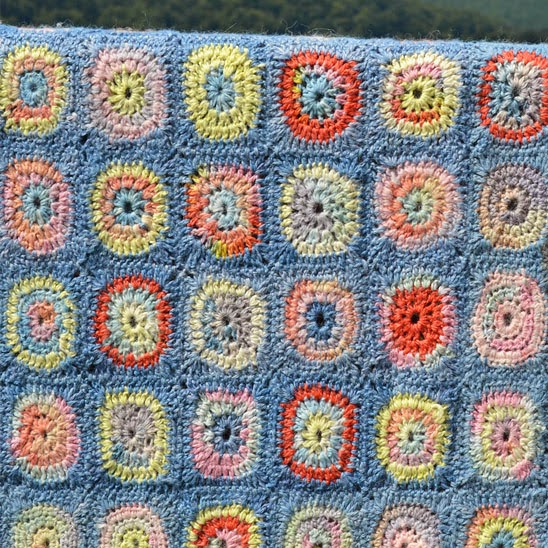 At the beginning of 2014 I decided to re-visit circles for the first blanket of my new book, so I used the same pattern as a base for my new design, however I discovered that if I made the circles with more rounds they didn't lay flat.
So I searched the internet for crochet circles patterns and became increasingly frustrated as I couldn't make any of them lay flat.
So I ended up putting several of the patterns together and then taking bits away to make a almost flat circle. 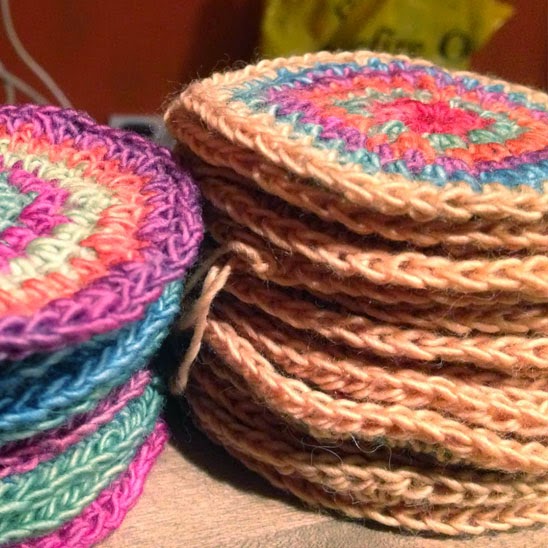 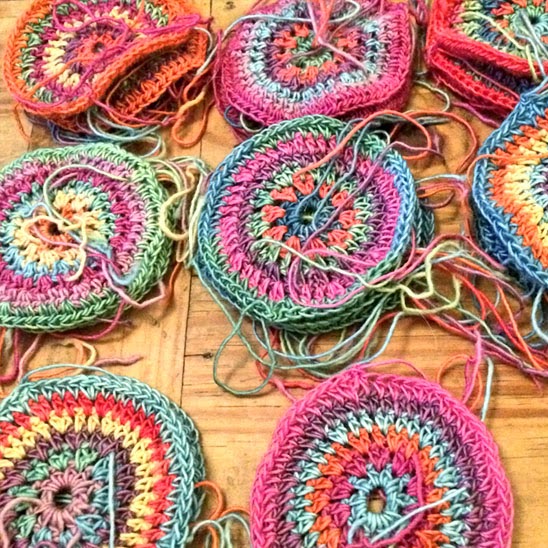 Book blankets 1 and 2 had big circles set within a square. 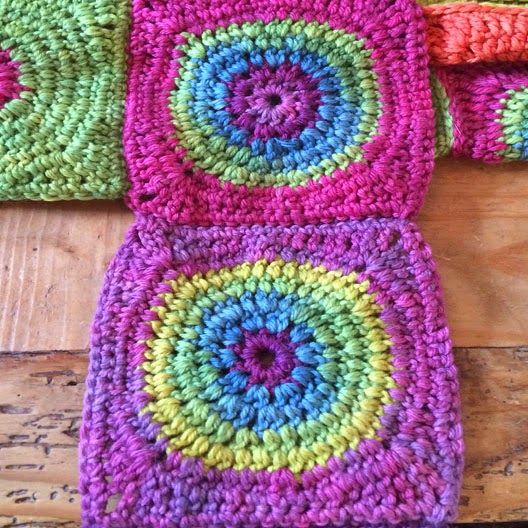 I spent the next few months designing squares and triangle blankets for the book, then mid June 2014 I decided to play with the circles again, this time I wanted to just have circles on their own with no squares surrounding them.
My lovely Valerie told me circles on their own don't work as there are gaps between them which makes wonky spaces.
I hate being told I can't do something, I'm too stubborn to listen so set out to prove her wrong.
So I played around until I managed to design a filler I was happy with.

While researching circle layouts and how to fit them together I discovered Descartes Kissing Circles theorum, even though I only understand it on a visual level I find it fascinating.
And so Kissing Circles was born, it was made in a hurry and ended up a lot smaller than I intended as I wanted to get it finished and on the wall for the Fibre East show in July. 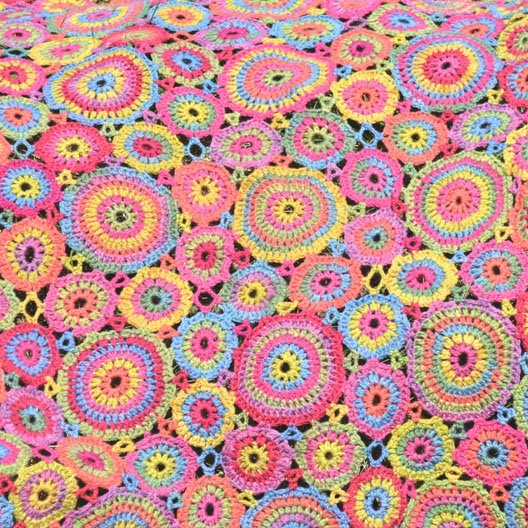 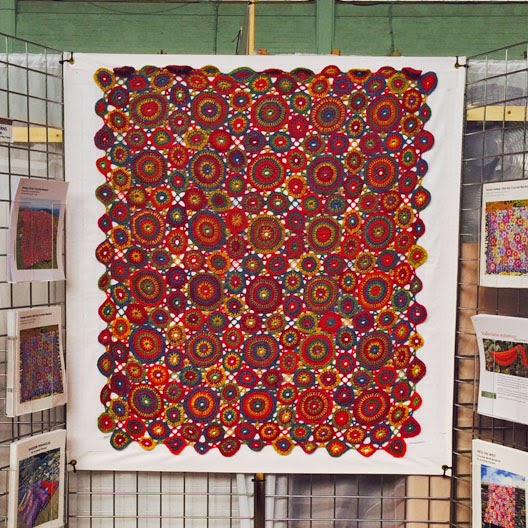 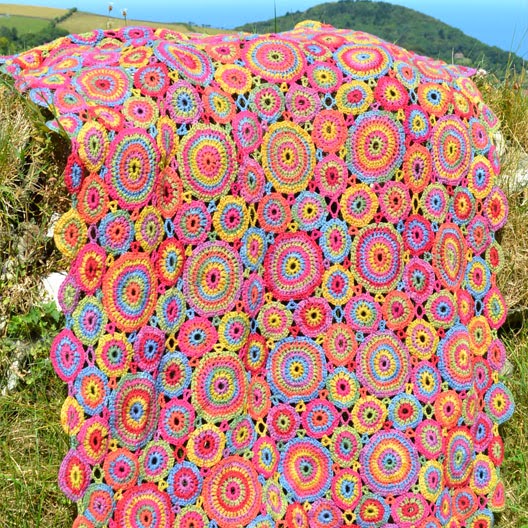 My next Kissing Circles design was Myrtle Scarf, its a different circles layout and was inspired by colour of the berries that grow in the East Lynn gorge.
Myrtle hasn't had much love, I blame the photo's and my issues with ancient laptops with failing screens, but I guess it might be because a scarf doesn't have the same impact as a blanket. 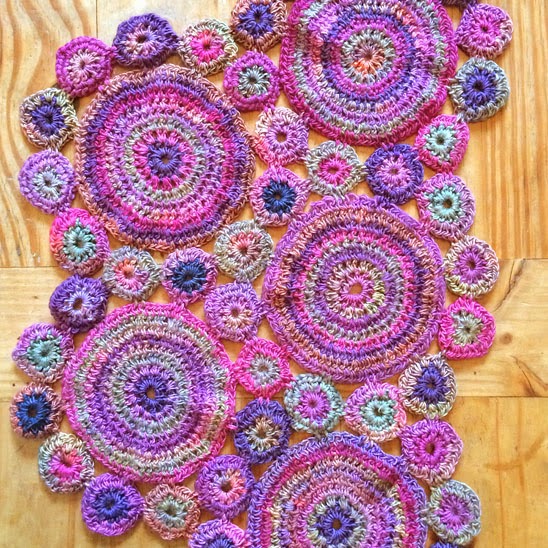 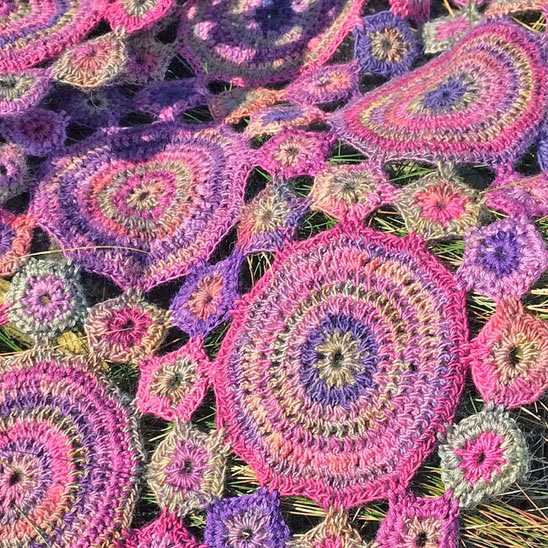 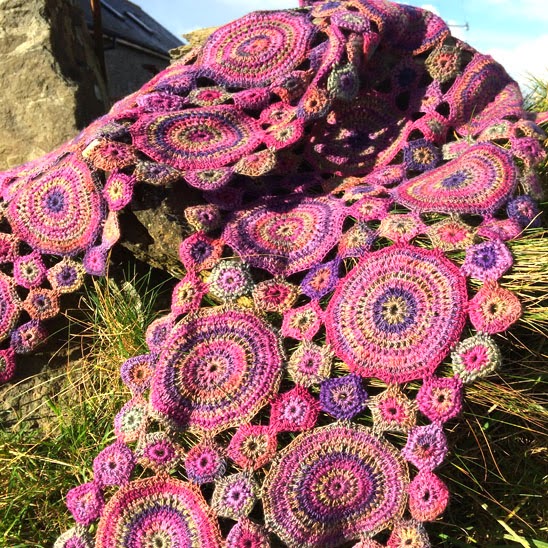 In November 2014 we went to see the Kaffe Fasset exhibition in Bath, I love Kaffe and have always loved Kaffe. I had a bit of an ephiphany which lead to the decision to mothball NDS.
It also made me realise that I was allowed to use the colours I wanted because even though he doesn't realise it Kaffe has told me its ok.
So I re-made Kissing Circles and the new version is called Kissing Kaffe
The photo's are a bit rubbish, so I need to take them again 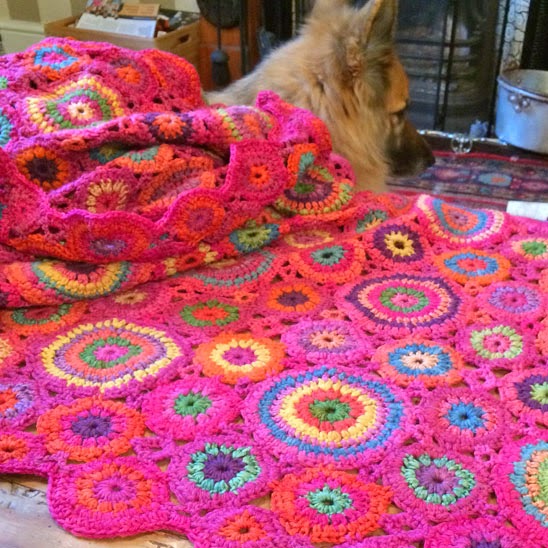 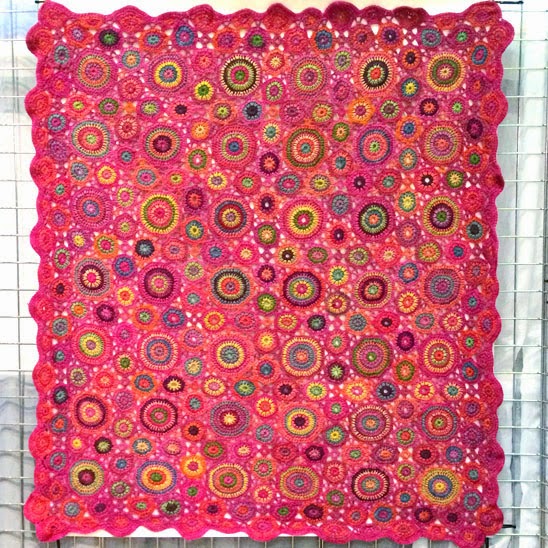 I decided to make another scarf in a new layout, but didn't get very far as I couldn't get the colours right.
Even though I struggled with the colours I loved the layout, so put it to one side to come back to later. 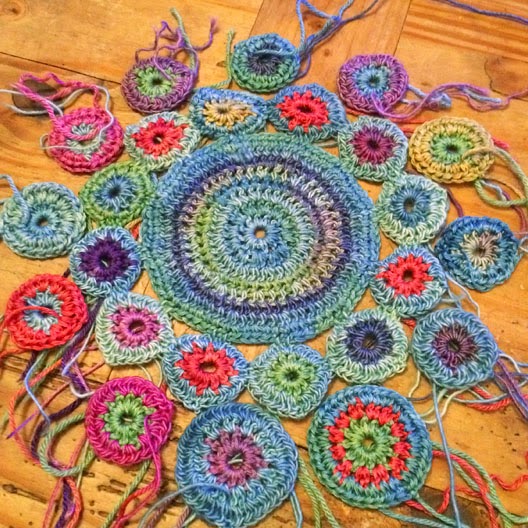 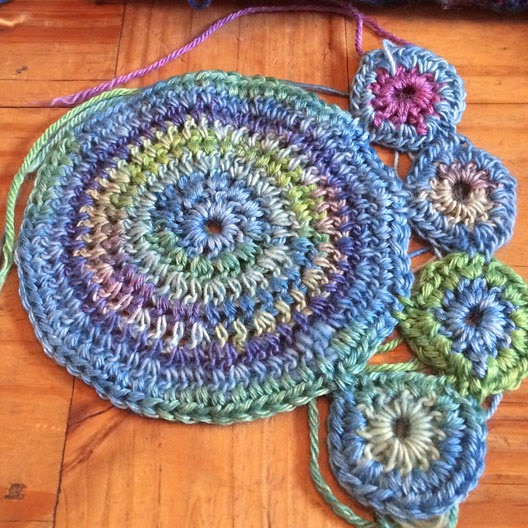 Over the past few weeks I have been talking about adding a new colour page to my blog.
A lot of people have contacted me panicking because they won't be able to buy NDS yarn to make their blankets with in the future and I need to give them a solution.
The solution needs to be a page full of colour that makes it easy to choose which yarns to buy, so I've been playing with tiny circles. 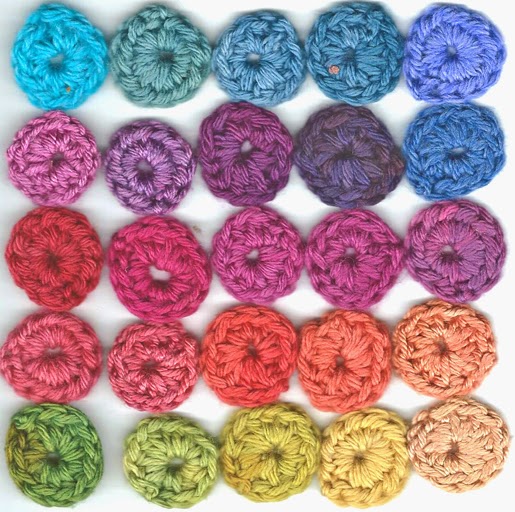 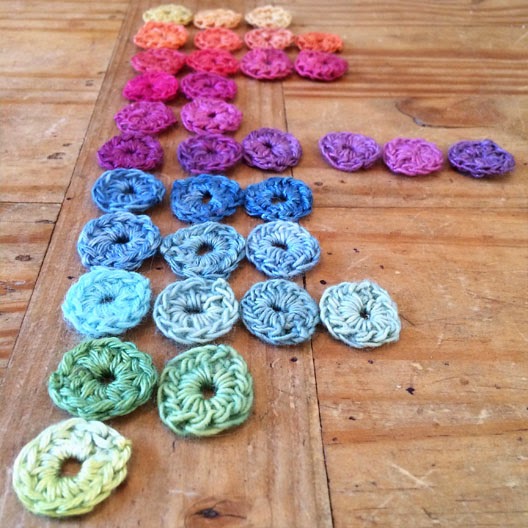 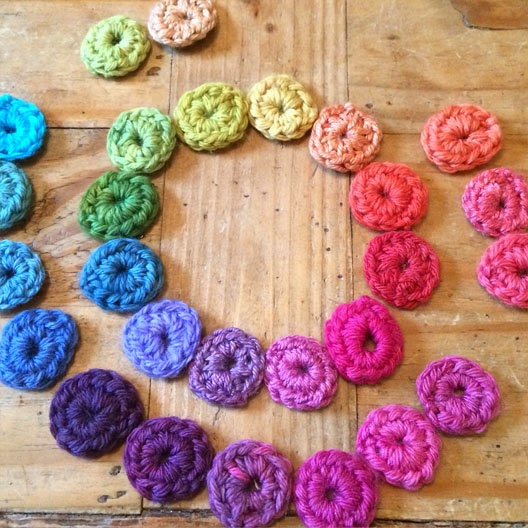 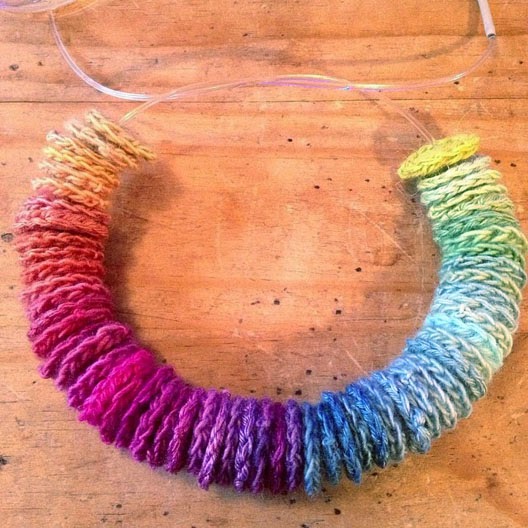 This weekend my colour page swatches turned into a new blanket, the photo's below show how it developed over the course of a couple of days... 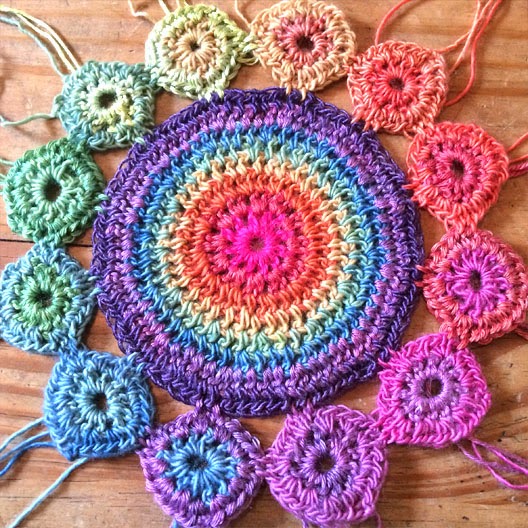 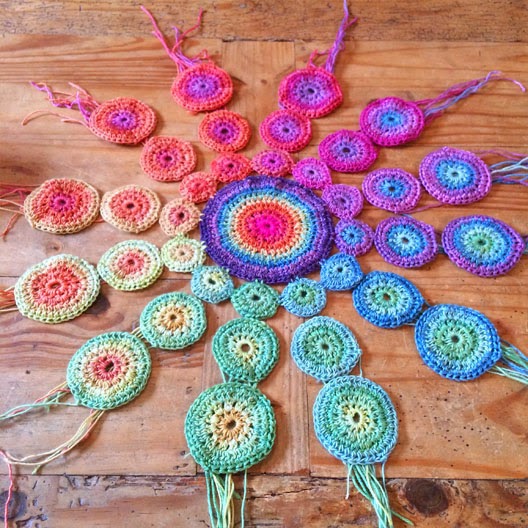 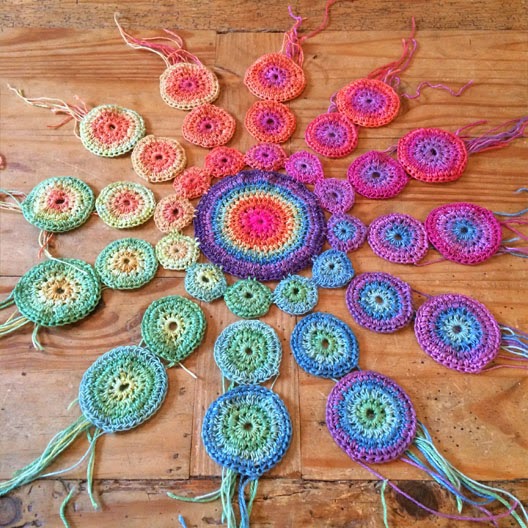 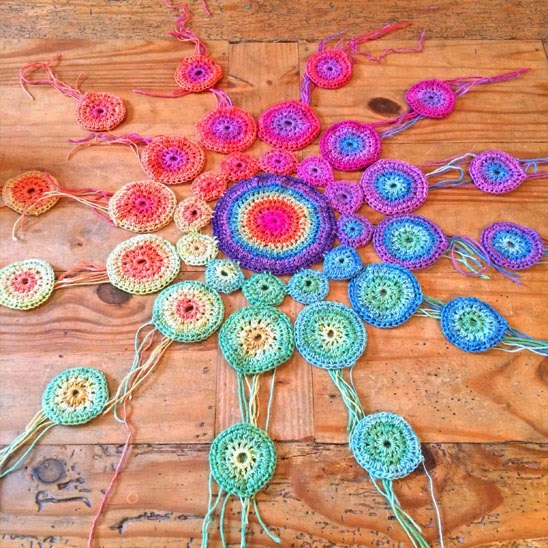 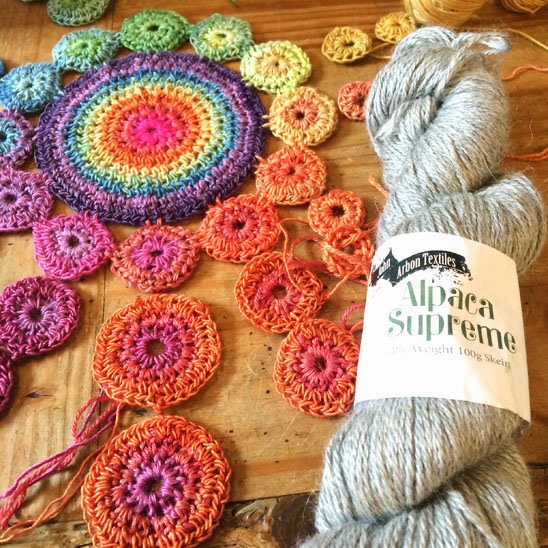 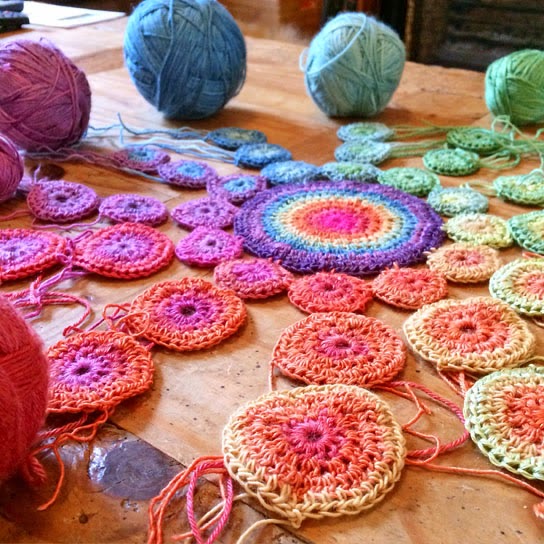 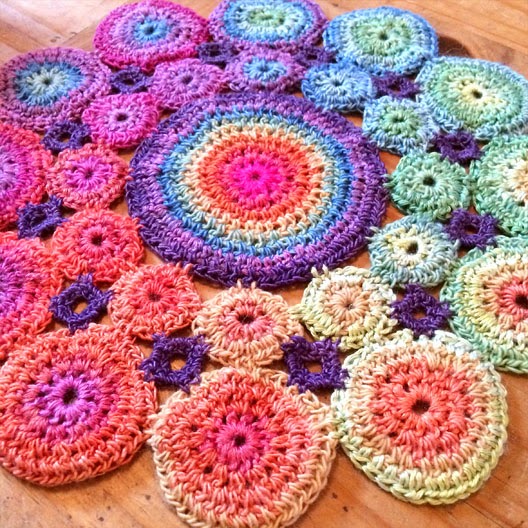 There was an emergency trip to John Arbon Textiles who lives just around the corner and has his shop just around the other corner when I realised that I would need a neutral colour for the fillers, my original plan was to use very pale grey, but accidentally (on purpose) bought a slightly darker shade than I wanted, so ended up using a old NDS dark purple instead.
But I did buy a very dark grey Knit by Numbers DK, which is lucky as I'm planning to use this version as a sample piece to display on my stand and to make the real blanket in John Arbon's Knit by Numbers DK. 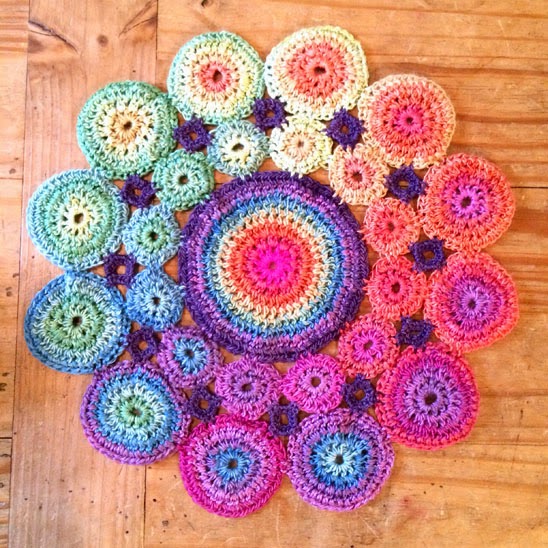 So watch this space to see how my Kissing circles develop and whether I will ever manage to publish a colour page :-)